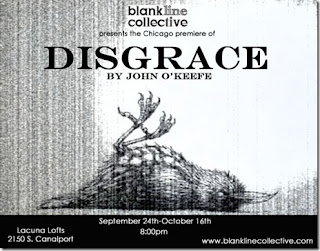 I suppose that one of the hallmarks of exceptional acting and directing, whether done in theater or in film, is the feeling, during exceptionally tense scenes, that you're watching something that you really shouldn't be viewing. This idea goes beyond voyeurism. In the opening scene of Alfred Hitchcock's Psycho, the camera zooms into a bedroom window, in essence capturing Janet Leigh, in her underwear, with her lover. That's voyeurism. In Blank Line Collective's production of John O'Keefe's "Disgrace," there's a scene in which Simone (Stephanie Brown) pushes herself up against Katherine (Amanda Lucas) in a perverse "recreation" of a possible sexual offense that may or may not have happened in the past. It's one of the few blatant interpretations of the play's background, and is done so convincingly that I shifted very uncomfortably, losing the realization that it was a performance.

"Disgrace," written by John O'Keefe and directed by Erica Barnes and Melissa Law, is currently in the middle of its Chicago premiere run. The play follows the travels of three women (Katherine, Simone, and Christine, played by Melanie Renae) on the run from a myriad of potential pursuers or problems. They don't know exactly where they are, there are issues even over what time of day it is, but they do have one goal in mind: to get over the distant hill. An unseen figure named Francois is a shared memory among the three, and his implications saunter back and forth. Was he a lover? A rapist? A captor? A case could be made for all three of those designations, and as the women continue to travel, it becomes clear that much more is at stake, including their sanity. The dialogue and the costume design add further confusion to the mix: who are these women? Why are they dressed in tattered, almost Victorian white dresses? If anyone in the audience feels that they've made sense of the timing, a can of Coca-Cola is thrown into the mix for good measure. 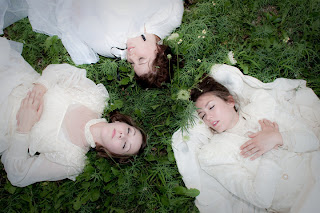 
Is the above synopsis confusing? Yes, but "Disgrace" is the type of play that simply needs to be seen to be comprehended, and even multiple show viewings will not tie everything together. On the other hand, too much information would give away much of the play's essence, even if, by reading this, one is still left in the dark. The direction by Barnes and Law makes "Disgrace" almost literally nonstop. Even when a given scene is concentrated in one area of the space (this interpretation is performed in all areas of a loft), there's still a lot of movement or anticipation, since the set and props are scattered about, hinting at future activity. Given the strength of O'Keefe's script and the talent of the actresses, Barnes is wise to let the story do most of the work, leaving the focus on the cast and the wealth of possible clues that are revealed.

As Katherine, Amanda Lucas displays her gift of wildly different emotions and her ability to switch from one to the other fluidly (her performance in BLC's "Heloise & Abelard" was another example of this). She veers from childlike innocence to indignation to unsettling rage, all within the course of seconds. Even if one knows what's coming, her emotional range is impressive nonetheless. Renae's Christine is much more understated, much more innocent, and works more as a foil caught between two much more unstable personalities. However, even in her most innocent moments, she's not exempt from the mental deterioration that all three women both fight and succumb to at the same time.

For such an excellently cast piece, it's difficult to single someone out, but Brown's work as Simone is absolutely stunning. In addition to matching Lucas with her own displays of emotional intensity, her facial acting is just as important to the atmosphere of "Disgrace." Brown was the picture of understatement in "The New Tenant," but here, she's able to let loose, and at times adds almost comic flares to her eyes and voice, teetering on exaggerated, but in the best of ways. One of the many themes to take away from "Disgrace" is the notion of mental instability, and Brown's performance is the epitome of a work that's both intense and, at times, perversely comical in the darkest sense.

Technical definitions aside, it's tempting to classify "Disgrace" as surreal, and while there are some undeniably strange elements, I feel that it would be too simple to give it such a designation. Besides, it's also too easy claim that something is surreal based on ideas and possibilities that cannot immediately be explained. That said, I don't think it would be too much of a stretch to call "Disgrace" an excellent example of the postmodern. Much like the best stories of Raymond Carver, O'Keefe's script doesn't shy away from confrontation or discomfort, but rightfully pulls away from easy answers. After grappling with wondering what "Disgrace" meant, I felt it was much more important to grapple with how it made me feel, for better or for worse. This is a stunning move up for Blank Line Collective, and one of the most provocative pieces of art that I've experienced in quite some time.