Sylvia Plath and the American Dream 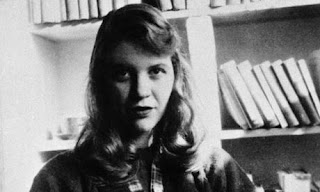 Finding an essay topic for a book like The Bell Jar is not unlike the old holiday slogan "What do you get for the person who has everything?" There are so many avenues, all of which have been traveled many times over. However, there's always the strong possibility of finding a new spin, or a new strain on an already analyzed topic. Also, there's the exciting prospect of discovering a new theme that may have been overlooked for many years; perhaps something has been lost in the mix. I'm not at all saying that this look will be said discovery, but that's part of the beauty of great literature. When it comes to topics in The Bell Jar, there are plenty to choose from--feminism, depression, quarter-life crises, suicide, and even a brief mention of lesbianism. Another spin on the daunting task of examining Sylvia Plath's writing is that, strictly in the realm of her sole novel, everything is available on the pages at first glance. This is not a knock against her writing style; far from it. Her metaphors are evocative, yet explicitly deployed. The title of the novel is the obvious one, but there are others. A beautiful (yet heart-wrenching) example is the fig tree. As the protagonist Esther Greenwood explains:

Esther is a champion, not of the lady crew variety, but of independence and feminist ideals. As Frances McCullough explains in her 1996 introduction to The Bell Jar, "When I asked an informal focus group of bright young women in their twenties what they thought about the book, they were unanimous: they loved it." These are essential and unequivocal understandings of this work. However, as I read it, I couldn't help but notice how Esther Greenwood's independence and ideals translated to a sort of resistance of the American Dream mystique. Yes, she entertains the idea of settling down, but for every flirtation with that, she states, with much more conviction, that she doesn't want to get married or have children. Returning to my earlier suggestion of varying strains on well-documented theses, I could also make a strong case that Sylvia Plath wrote a possibly unintentional companion to the Beat novels, especially given Esther's desire to feed her experiences to in turn feed her creative voice. However, my primary argument is that Esther's resistance is not just feminism, but a rejection of postwar American wants. As Esther interns at a fashion magazine, we're immediately treated to her keen awareness and superior intelligence to everyone around her. As the above quote shows, she's focusing on doing what she wants (despite not knowing exactly what that means), and not just trying to land a decent husband. The novel opens on a curious note:

"It was a queer, sultry summer, the summer they electrocuted the Rosenbergs, and I didn't know what I was doing in New York. I'm stupid about executions. The idea of being electrocuted makes me sick, and that's all there was to read about in the papers (1)."

Perhaps this is stretching an idea too thin, since this opening showcases her mentality and offers some blatant foreshadowing to the rest of the work. Also, there's an excellent chance that the reference also helps to put the context of time in place immediately. However, the reference to Julius and Ethel Rosenberg strikes me as daring. The Bell Jar wasn't published in the United States until after Plath's suicide, but imagine that it had been available immediately. This simple phrase could have very well elicited harsh responses for any perceived sympathy to the Rosenbergs. The era was pre-Vietnam, when any domestic criticism of U.S. actions was deemed virtually blasphemous. She goes on to admit that she's spent a great amount of time thinking about the couple, and while this is primarily out of morbid curiosity, it's worth noting that this intelligent character is putting a physical, human face on an event that many Americans at the time would have simply dismissed as "the right thing to do."

"After that--in spite of the Girl Scouts and the piano lessons and the water-color lessons and the dancing lessons and the sailing camp, all of which my mother scrimped to give me, and college, with crewing in the mist before breakfast and blackbottom pies and the little new firecrackers of ideas going off every day--I had never been really happy again (77)."

Here, Esther gives evidence to her state of mind being developed very early. Also, it's an honest dismissal of what some would deem a "nostalgic childhood." Again, there are some very American examples at play, namely Girl Scouts and summer camps, which in the 1950s and 60s were considered foundations. Adding feminism to the mix, it's very possible that people at the time would have considered it dangerous and unhealthy for a woman to not be finding happiness in the pursuit of "the good life" or a "normal childhood." This also shows how national and sociological ideals can be very intertwined. Esther's critiques can be viewed strictly as feminism; they can be viewed as a fight to what her environment expects of her; or they be laced together.

I'm intentionally not mentioning the heavy autobiographical elements that Plath used. This is partly because I only know a very basic outline of her life, and I'm attempting to show the possible interpretations on their own. I'm leaving out glaring examples of what makes The Bell Jar such a classic. Esther's depression is universal and completely separate from any links to sociological hypotheses:

"...because wherever I sat--on the deck of a ship or at a street cafe in Paris or Bangkok--I would be sitting under the same glass bell jar, stewing in my own sour air (185)."

It's truly amazing how hysterically funny Plath's writing can be, especially when woven into passages of extreme distress and cringe-inducing moments. This shows how Esther, even plunged into a world of psychiatrists and electroshock treatments, still maintains her true composure, not losing any of her intelligence, even if her intensely moving mind led her into her internal downfall. I'm closing with one terrific passage that seems to highlight most of the themes, from the universal to the hypothesized.

"On a low coffee table, with circular and semicircular stains bitten into the dark veneer, lay a few wilted numbers of Time and Life. I flipped to the middle of the nearest magazine. The face of Eisenhower beamed up at me, bald and blank as the face of a fetus in a bottle (89)."

I really enjoyed reading your posts :) Especially the Slyvia Plath one, I'm a fan of her poems. See you at work sometime soon.

Hope you plan on updating your blog in the near future. It has a great foundation. Keep chugging along.