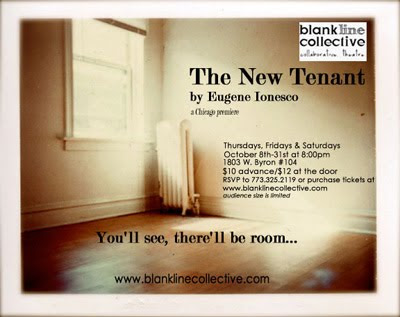 At one point in the performance of Eugene Ionesco's The New Tenant, one of the movers (Erica Barnes) begins an exaggerated, funny, and defiant vocalization of Scott Joplin's "The Entertainer." She's tired, sweaty, and overworked, having spent all of her time assembling a myriad of objects into a formerly vacant apartment. The apartment is now overrun with furniture, knick-knacks, boxes, and an accumulation of a lifetime's worth of objects. The movers (Barnes and Amanda Lucas) are dedicated, yet clearly unnerved by the demands and focus of the tenant (Stephanie Brown). The musical interlude provides some much-needed laughter to counteract with the tension, but for me, it provided a clear definition of the undefinable: namely, the emotions and actions that sum up the Theater Of the Absurd, of which Ionesco (1909-1994) was a major contributor. The song is naturally jaunty and light, but the mover inflects it with stress and confusion, even though she's singing it to fend off the exhaustion. As vague as human nature as a subject can be, it's rife with contradictions, and this performance highlights the absurd both literally and metaphorically.

Blank Line Collective kicks off their fall season with a major challenge, performing the Chicago premiere of Ionesco's The New Tenant. Milan Kundera once wrote of Ionesco (along with Samuel Beckett): "How many dramatists of the past century have had such power, influence? One? Two?" An appraisal of this magnitude offers two observations. One, how is it possible that this piece has gone unperformed for so long, in one of the country's most prolific theater cities? Two, such a gem is vital for the creative side of a small company. This particular play demands a lot from its actors, not just in historical stature, but in the performances, which are written with the intentional possibility to be over-acted to the point of absurdity, and not in a good way.

The play opens with a building caretaker (Jen Sava-Ryan) meeting the new tenant, who has arrived earlier than expected. The tenant is dressed in black, uptight with a sense of decorum, and oblivious to the hilarious, gossipy ramblings of the seemingly lonely caretaker. As the tenant takes notes on the state of the new apartment, the caretaker gives a virtually non-stop monologue on the inhabitants, both past and present. There's a loud police officer who lives upstairs, and the previous tenants were prone to domestic violence. The caretaker knows everything, but claims to not pry into anyone's private lives, even though she blatantly gives off the vibe of someone who listens through walls with a drinking glass pressed against the door. For anyone unfamiliar with the Theater of the Absurd, this is a wise opening; one would expect that The New Tenant would be a standard, two-act play that's heavy on dialogue. However, once the movers show up, absurdity and surrealism take over, along with the aforementioned contradictions.

The movers know exactly what to do, but are given constant directions and orders by the tenant. She allows them to place some objects wherever they want, but for the most part has a strict order that she wants to follow. The bulk of the play revolves around the dizzying amount of objects that fill up the apartment. There are boxes, a mattress, paintings, a large camping tent, chairs, and lamps. In the middle of this move, the movers are given a quick break, monitored by a cooking timer. This, along with the final scene, are the only real moments of calm that permeate the entire piece. It allows the movers to rest, but it's also a rest for the audience, a small chance to process the speed of which everything has accumulated. The tenant and the movers have a very strict relationship based on the job at hand, but one cannot help but wonder if there's more below the surface. The movers shoot each other the occasional exasperated looks, as if they've known the tenant's eccentricities all along, bracing each other for what could happen next. The final scene is somber and unexpected, yet seems to make perfect sense in context. Most importantly, it just adds more intended questions to the poetry of the movements, and the absurdity of life's actions. As Barnes said after the show, "when you think about it, moving is absurd." This might seem almost too easy of an explanation, but given the play and the movement from which it came, this definition works.

The performances are almost reserved in spite of the kinetic pacing. Barnes and Lucas play the movers with an air of comedy, complete with almost slapstick movements and exaggerated determination. This is not a knock against them, since the characters are given no time to react in between their given tasks. Their eyes and facial expressions are giveaways, since they see something either wrong or amiss below the surface of the tenant's expectations. Stephanie Brown's performance is the center of the play, an almost uncomfortable calm in between the accumulation of materials. She plays the tenant with an almost minimalist tint, her cold eyes taking constant mental notes, her perfect posture never wavering, and a wealth of emotion portrayed with a stare or a purse of her lips. Jen Sava-Ryan's portrayal of the caretaker is intriguing, the kind of role that seems to be a constant in many of the productions I've seen. She's needy and scattered, and works as an excellent foil to the tenant. They act as opposites, but from the first moment, they have each other figured out to a tee, even though their private opinions of each other are probably not savory.

Without giving anything away, there is a slight element of audience participation in this performance, which made me slightly skeptical at first. There's only so much breaking of the fourth wall that can be done without it becoming a distraction from the performance, but this interaction is kept to a minimum and works well. Overall, this is an excellent production, but I felt it would have benefited from a slightly slower pace. Yes, there's an energy that needs to be maintained, not to mention the wealth of materials that need to fill the apartment in little time. The fleeting moments of serenity highlight the metaphysical nature and questions of the play's theme, and one or two more "breaks" would have helped to let the audience catch up, mentally. However, the questions that people will have after the performance are the best kinds, and they will likely center around that most impossible, vague query:

"What does it all mean?"