The Various Souls of Literature 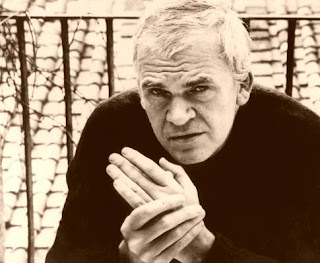 For the past two weeks, I've been devoting a substantial amount of time to the Milan Kundera essays that make up his 2005 book The Curtain. However, I should add that I finished reading it a few days into those two weeks. As I make halting, delayed progress on reading David Foster Wallace's Infinite Jest, I've also been looking for shorter books to accompany that project. To be more specific, even though I need to be fully devoted to Wallace's masterpiece, in the interest of this blog and my personal studies, it's hard to give my all to just one book over the course of many weeks. This has led to a contradiction of sorts. Instead of setting a definite schedule for Infinite Jest, immersing myself in the complex novel, I've immersed myself in a slim book of theory about the novel as a whole. This is not a bad thing. The problem is that Kundera's musings on literature rely heavily on outside sources and novels, making it difficult to find passages to cite for a general overview. This leads to multiple readings of the same passages, time that could be put towards Mr. Wallace's book and my goal to finish it by the end of October (not very likely).

In college, I read some selected passages from another Kundera essay collection, The Art Of the Novel. No, one should never judge a book by the cover, but with these non-fiction works by Kundera, this is almost impossible, and I end up judging the books in the best of ways. An essay collection by an international master, accompanied by visually striking cover paintings? Aesthetically, it's hard for me to resist. Much like Italo Calvino, Kundera's works are marked by an intelligent optimism about the benefits, joys, and the ultimate future of the novel. This is evident even as he defends an author like Gustave Flaubert, who in his time was criticized for a lack of "goodness" in his works.

"But, memories aside, is it really so inappropriate for the most prestigious French critic [Sainte-Beuve] of his time to exhort a young writer to 'uplift' and 'console' his readers by 'a picture of goodness,' readers who deserve, as do we all, a little sympathy and encouragement?...Flaubert replies that he never sought to write either criticism or satire. He does not write his novels to communicate his judgements to readers. He is after something entirely different: 'I have always done my utmost to get into the soul of things' (Kundera 59-60)."

Even though he's discussing a nineteenth century writer, I was struck by how Kundera's analysis could be applied (both ways) to two other books that I've written about here. Given that "the soul of things" means showing the bad without judgement, a modern example could be Roberto Bolano's 2666. That work depicts, in a few hundred grisly detailed pages, the murders and rapes of women in Mexico. As gruesome as they are, there's an unspoken, undeniable "soul" of the people who are either involved or implicated in those crimes. Bolano felt no need to balance these with obvious "opposites," i.e. goodness for the sake of counteracting the badness. Flaubert's critic would likely have been a fan of Jose Saramago. In Blindness, there's a definite feeling of Saramago giving the good and the bad an equal billing, with goodness poised to win in the end. This is not at all a criticism of Saramago's novel, but merely an example of the critic's argument.

Towards the end of The Curtain, Kundera examines a part of reading a novel, one that should be obvious at first, but rather shapes a fascinating realization.

"The novel, on the other hand, is a very poorly fortified castle. If I take an hour to read twenty pages, a novel of four hundred pages will take me twenty hours, thus about a week. Rarely do we have a whole week free. It is more likely that, between sessions of reading, intervals of several days will occur, during which forgetting will immediately set up its worksite. But it is not only in the intervals that forgetting does its work; it participates in the reading continuously, with never a moment's lapse; turning the page, I already forget what I just read; I retain only a kind of summary indispensable for understanding what is to follow, but all the details, the small observations, the admirable phrasings are already gone. Erased. Someday, years later, I will start to talk about this novel to a friend, and we will find that our memories have retained only a few shreds of the text and have reconstructed very different books for each of us (149-150)."

This notion of forgetting was evident as I re-read various passages of this book in preparation for this post. Some of Kundera's ideas were familiar as I read them a second or a third time, but a few of them felt new or different, even though I knew that I had encountered them at least once before. I like to consider myself a studious reader, but even Kundera himself admits to the forgetfulness that plagues all readers. Sometimes, if I find myself glazing over a page, I snap myself out of the trance and go back a few pages; more often than not, I realize that I've missed essential passages, or I've read them in a vastly different context. This makes Flaubert's notion of "the soul of things" much more accurate. When it comes to books, with the exception of some brilliant lines or self-highlighted passages, we retain only a rough outline of the plot and the meaning. Soul encompasses all of the small and finite details, even if as readers, they've been unintentionally lost or overlooked; they're still there.

I hope to get much more out of this theory in the near future, as I get into some of Kundera's actual novels as opposed to books on novels. This also refreshes my resolve to finish Infinite Jest, especially with the onset of forgetfulness; I need to keep reading it, despite time constraints, in order to retain its details, and ultimately, its soul.