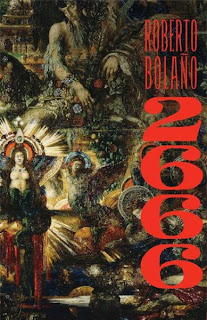 After roughly two months, I recently finished reading Roberto Bolano's 2666, probably the most exciting, heralded novel of 2008 (the English translation). After a reading of any text, I always allow a day or two before attempting to write about it. This personal rule seems imperative in the wake of this novel, given its sheer size, in terms of page length and in terms of information. Anybody reading this opening paragraph will be forgiven for thinking that these sentences seem more appropriate for a tenth-grade term paper. There is simply no way to pick an appropriate starting point for an analysis of 2666. As with Bolano's previous novels, the pages demand attention and multiple readings.

A brief sketch of the events presented in its pages will give an idea of how vast and intertwined the novel is as a whole. Four professors, scholars of a reclusive, mysterious writer named Benno von Archimboldi, try to find the writer (and ultimately themselves) in a flurry of conferences, intercontinental travel, sex, nightmares, and the fictional Mexican town of Santa Teresa. Another professor is both bemused by his unstable ex-wife, haunted by voices, and seemingly on the verge of insanity (or perfect clarity). A New York journalist gets caught up with a mysterious woman while on assignment to cover a boxing match in Mexico. Hundreds of women, mostly working class teenagers and women in their twenties, are brutally raped and slaughtered. A young German writer experiences war and complex relationships (both familial and social) in World War II and the ensuing fifty years until the present. As is expected from Bolano, these characters and developments are presented both as singular entities as well as painstakingly connected fabrics. However, despite the connections, the passages can be looked at individually. In fact, Bolano's intention was for the five chapters to be published one at a time as a way to provide financially for his family. Luckily, his heirs (as noted in a brief introduction to the text) saw the need for 2666 to be published as a whole.

The opening chapter is a wonderful example of Bolano's gift for varying literary styles. The adventures (and misadventures) of the four professors spin between academic mystery, cinematic love affairs, and Bolano's incredible attention to detail. Take this passage, which is rendered carefully described and ends on a wonderfully abrupt note:

"Three days after the meeting with Archimboldi's publisher, [Pelletier] showed up in London unannounced, and after telling Liz Norton the latest news, he invited her to dinner at a restaurant in Hammersmith that a colleague in the Russian department had recommended, where they ate goulash and chickpea puree with beets and fish macerated in lemon with yogurt, a dinner with candles and violins and real Russian waiters and Irish waiters disguised as Russians, all of it excessive from any point of view, and somewhat rustic and dubious from a gastronomic point of view, and they had vodka with their dinner and a bottle of Bordeaux, and the whole meal cost Pelletier an arm and a leg, but it was worth it because then Norton invited him home, officially to discuss Archimboldi and the few things that Mrs. Bubis had revealed, including, of course, the critic Schleiermacher's contemptuous appraisal of Archimboldi's first book, and then both of them started to laugh and Pelletier kissed Norton on the lips, with great tact, and she kissed him back much more ardently, thanks possibly to the dinner and the vodka and the Bordeaux, but Pelletier thought it showed promise, and then they went to bed and screwed for an hour until Norton fell asleep (Bolano 29-30)."

The longest chapter of the novel describes with sickening (yet coldly detached) descriptions of the rapes, murders, and tortures of dozens of working class women in Santa Teresa. These passages sometimes last no more than a paragraph, moving almost like the killer(s)--quick, accurate, and moving on to the next victim very matter-of-fact. Suspects are arrested and released, most of whom are clearly innocent, but victims of a corrupt, ineffective Mexican police system. However, in the middle of this chaos is probably the second-most important character, police investigator Juan de Dios Martinez. While he genuinely wants to have the murders solved, he understands the impossibility of that happening, especially with the lackluster colleagues at his disposal. He's detached, yet his emotions come achingly close to being expressed. It's the classic cliche of the veteran American police officer/detective, familiar from the days of pulp novels as well as modern cinema and television. However, Bolano creates Martinez originally, with a Mexican backdrop, and even adds the occasional North American police officer as a subtle point of comparison. Martinez has feelings for the director of a mental hospital, an older woman partly involved in the murder investigation. His obvious emotions towards the case are mirrored in the emotions he wants to express to the woman:

"Sometimes Juan de Dios Martinez would sit and think how he wished he knew more about the director's life. For example, her friendships. Who were her friends? He didn't know any of them, except for a few employees at the psychiatric center, people the director treated warmly but also kept at arm's length. Did she have friends? He suspected she did, although she never talked about it. One night, after they had made love, he told her he wanted to know more about her life. The director said he already knew more than enough. Juan de Dios Martinez didn't insist (423)."

The final chapter partly takes place in Nazi Germany before fast-forwarding through fifty years of developments that tie up the mysteries while leaving some obvious questions unanswered. One of the scenes has a wonderful discussion of culture that is reminiscent of the closing library scene of Italo Calvino's If On a Winter's Night a Traveler:

These final two sentences of the passage seem open to interpretation, and to me, they fit well into the meaning of Benno von Archimboldi, and therefore, the complete arc of 2666. His life is written about both in detail and with mystery, his writings and existence shaping (both intentionally and otherwise) the lives of the other men and women of the novel. The professors whose stories begin the tale are not content to know Archimboldi's life through his work. Their research and determination are staggering, with the occasional dead end, but their lives are comparable to the life of Archimboldi. Deep down, their lives are long enough to enjoy his works.

2666 continues a theme that I've noticed in literature both past and present, a theme hinted at in my mention of If On a Winter's Night a Traveler. There is probably a term for this that has simply slipped my mind, and it's the idea of novels presenting characters and events so detailed and definitive, yet completely open to other strains of interpretation, and perhaps contradiction. This work does not have the romance of The Savage Detectives, yet this is worth the hype of being considered Bolano's masterpiece. The themes of literature, identity, and landscapes are classic, yet he shapes them as a stunning maze. As I mentioned above, these descriptions may not be as strong as they should be, but multiple readings of 2666 will undoubtedly bring more to these discussions in the coming years.

The Underrated Blog-a-Thon starts on Monday! Click the link for full details, and multiple submissions are welcome. If you're contributing, either shoot me an e-mail or post a comment on the original announcement link (here). I can't wait to read the contributions. Let me know if you have any questions. Also, it runs until Friday, so there's a bit of breathing room if you'd like to contribute, but don't have any ideas at the moment.
at March 21, 2009