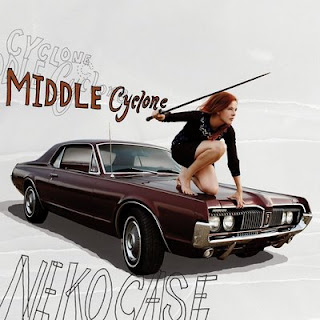 With U2 having the most high-profile new release this week, it's a victory for Neko Case's Middle Cyclone, which is holding its own with the legendary heavyweights. And, at first glance, she's getting much better early reviews. The buzz has been building for months, most likely fueled by the universal praise for 2006's landmark The Fox Confessor Brings the Flood. This dynamic is beautiful and doesn't happen as often as it should. Case has not changed a thing about her approach, still affiliating with excellent indie labels (Anti-), doing a lot of tireless self-promotion, yet she has been embraced by the mainstream. She might never have a Top 40 hit, which is probably fine by her. It's always literally been about the music since she started.

Middle Cyclone seems to be a return to her alt-country roots, a designation that seems to be occasionally misplaced on her. Some of her best songs ("Deep Red Bells," "Star Witness") would be better classified along the lines of "alt-neighborhood." They're not so much small-town (read: country) songs, but they're not big city anthems, either. Her first albums were stunning mixes of country and neighborhood stories (Tacoma, Washington and Humboldt Park in Chicago), worries, and angst. Then, Fox Confessor Brings the Flood went in a vastly different direction, taking those influences and blending them with modern folktales and mythologies. Middle Cyclone has been lauded for its nature imagery but there's much more to the picture. It's like saying Philadelphia has cheese steaks. Sure, it's true, but there's much more to take in.

The opening track, "This Tornado Loves You," is a wonderful, breezy song, combining Neko's vocals at their most confident, telling an offbeat love anthem from the point of view of said tornado. However, the album then takes a sharp turn in the opposite direction. "The Next Time You Say Forever" is quick and melancholy, hitting its target both heart-wrenchingly and violently. It would have fit in perfectly on 2002's Blacklisted. These two tracks are Case at her finest, both raucous and vulnerable. Returning to the nature motif, the album closes with the calming/eerie (take your pick) "Marais La Nuit," a thirty minute audio recording taken by Case at her farm in Vermont. Faint cricket chirps are the only sounds. Some might see this as an unnecessary addition to Middle Cyclone, but knowing the backstory helps. I like the mental image that accompanies the sounds--Case, quietly sitting outside, taking in a solitary night. It's definitely the emotional opposite of the fantastic album cover.

The only blemish on this album is the cover of Sparks's "Never Turn Your Back On Mother Earth." This is hands down Neko Case's worst song, which is sad, since she's usually a master of cover songs (Harry Nilsson's "Don't Forget Me" is a return to this form six songs later). "Never Turn Your Back On Mother Earth" has its heart in the right place as an impassioned plea for environmental awareness. However, it has too much schmaltz for Case, not to mention being too blatant. I'm sure she could have written her own version with the same message, with more metaphorical brilliance.

Overall, this album is terrific, with hints to her alt-country roots. It doesn't have the instant classic vibe of Fox Confessor, but listeners shouldn't be expecting that anyway. Her voice is as beautiful as ever, and her songwriting hasn't lost any originality (for example, take lines like "wretching pennies in a boiling well" or "waiting with a glacier's patience"). Since the songs switch tempos frequently (as between tracks one and two), Middle Cyclone feels like a live album. Case's ardent supporters (myself included) will look forward to these songs being integrated into her live sets.
at March 04, 2009

The Sparks are a difficult band to cover, operating at an extremely high level of shmaltz, as you put it, most of the time. Thus, their songs don't usually translate well. That said, the audacity to attempt it is worth praise.

Ron Mael of Sparks doesn't do schmaltz. The lyrics on "Never Turn Your Back on Mother Earth" are very dark, highlighting how powerful and destructive Nature can be - it was never a green anthem. (View it in the same light as Never Turn Your Back on a Heavyweight boxer)! It's a brilliant song and all credit to Neko Case for such an excellent cover.