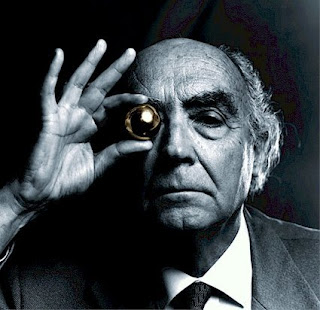 In a great example of coincidence, I read Jose Saramago's 1995 novel Blindness a week after a profile of his Portuguese contemporary, Antonio Lobo Antunes, appeared in The New Yorker. Peter Conrad's article does not disparage Saramago's contributions to international literature, but does hint at some bad blood between the two men.

"At home, the two writers, like rival political parties or sports teams, have noisy partisans, and those who cheer for Lobo Antunes claim that the wrong man won the Nobel [Prize]. Lobo Antunes himself apparently agrees: when [The New York] Times
called for a comment on Saramago's victory he grumbled that the phone was out of order and abruptly hung up (Conrad 69)."

This opinion is a stark contrast to an old co-worker of mine who offered nothing but praise to Saramago's novel The Cave. These differing views were on my mind as I read Blindness, the balance between the praise and the likely contempt of an undoubtedly important writer. This also reaffirms that even the best artists have plenty of detractors, and that the art world can have heated debates not unlike sports bar arguments during a football game.

Blindness takes place in a nameless city inhabited by people who are identified only by their professions or physical attributes. These citizens include the doctor, the doctor's wife, the old man with the black eyepatch, the thief, etc. The city is hit by a sudden epidemic of "white blindness," which the government attempts to control by isolating the infected under armed guard in an abandoned mental hospital. Any concern or hope for a cure becomes a primal, almost Darwinian fight for survival. The "inmates" are shot with brief warnings if they stray too far from their designated areas. Blind criminals withhold food from the other inmates in exchange for valuables and the wanton rape of the blind women. To top this off, the blind must deal with squalor and the bodies of the dead. The doctor's wife inexplicably retains her sight, which leads to personal moral questioning as well as immediate leadership unknown to anyone except for her husband. Should she keep her sight a secret in order to quietly help the others? Or should she come forward and risk being a sort of slave for the helpless? A common description of the novel is that it reflects the mentality behind shameful events of the twentieth century. The isolation and fear of the blind can be an easy metaphor for the Holocaust or the Japanese internment camps of World War II. While this is certainly true, the novel could also be applied to the discrimination against Middle Eastern-Americans following the September 11th attacks:

"The suggestion had come from the minister himself. It was, whichever way one looked at it, a fortunate not to say perfect idea, both from the point of view of the merely sanitary aspects of the case and from that of the social implications and their political consequences. Until the causes were established, or, to use the appropriate terms, the etiology of the white evil, as, thanks to the inspiration of an imaginative assessor, this unpleasant sounding blindness came to be called, until such time as treatment and a cure might be found, and perhaps a vaccine that might prevent the appearance of any cases in the future, all the people who had turned blind, as well as those who had been in physical contact or in any way close to these patients, should be rounded up and isolated so as to avoid another further cases of contagion (Saramago 37)."

Or the aftermath of Hurricane Katrina:
"The Government is fully aware of its responsibilities and hopes that those to whom this message is directed, will, as the upright citizens they doubtless are, also assume their responsibilities, bearing in mind that the isolation in which they now find themselves will represent, above any personal considerations, an act of solidarity with the rest of the nation's community (Saramago 42-43)."

According to the Wikipedia article on the 2008 film adaptation of Blindness, there was considerable outrage from blind organizations, claims that the depiction of blind people was negative at best and animalistic at worst. However, these claims were best dismissed by Saramago himself: "Stupidity doesn't choose between the blind and the non-blind." Again, the blindness fear could be substituted with any quick change in security or stability, especially on such a drastic, widespread level. This is probably not a major spoiler, but the uplifting ending of the novel also mirrors the levels of calm that return following natural and national disasters. These thoughts represent a small selection of the metaphors available in the novel's pages. Another admirable trait is Saramago's liberal use of what otherwise would be considered cliches, thus proving that all cliches and overused sayings are steeped in truth.

"Nothing lasts forever, be it good or bad, the excellent maxims of one who has had time to learn from the ups and downs of life and fortune (Saramago 121)."
"...don't think that blindness has made us better people, It hasn't made us any worse...(Saramago 133)"
"...as is only just when someone dares bite the hand that feeds him (Saramago 164)."

A question presented by the novel (at least in my mind) is whether the blindness is truly contagious, since the doctor's wife retains her sight throughout the text. However, her sight, besides the obvious necessity, also exists to create a metaphor for feminism, despite continually going by the name "the doctor's wife." Even without identity via her own name, her actions show her growing independence and assertiveness as the horrors progress.

"What I'd like to know is who did the stabbing, The women who were there at the time swear it was none of them, What we ought to do is to take the law into our own hands and bring the culprit to justice, If we knew who was responsible, we'd say this is the person you're looking for, now give us the food, If we knew who was responsible. The doctor's wife lowered her head and thought, He's right, if anyone here should die of hunger it will be my fault, but then, giving voice to the rage she could feel welling up inside her contradicting an acceptance of responsibility, But let these men be the first to die so that my guilt may pay for their guilt (Saramago 195)."

Later in the novel, the women are referred to as "washerwomen," easily a demeaning term. However, despite the initial shock of the word, the reader knows that it doesn't hold any true demeaning power, given the courage and strength the women have displayed from the very beginning. No matter what befalls them, whether intentional hardships or natural ones, they fight back admirably.

Saramago is a natural storyteller, and Blindness moves briskly, reading simply, yet is filled with allegorical weight. The examples I've cited don't even come close to demonstrating the full spectrum, especially given Saramago's propensity for religious symbolism. These metaphors and allegories are, in the same breath, part of what brings the novel down at times. Saramago is a gifted writer, yet the plot points almost beg to be the metaphors that they are. Perhaps he wanted the text to raise quick, obvious, and important questions, but given the layers of the story, they didn't have to be as blatant. Being set in a nameless city, the text lends itself to universal connections, whether those be the horrors of war or looks at basic interactions. Returning to Conrad's article, one of Lobo Autune's differences is that his works focus specifically on the trials and landscapes of Portugal. The question open for discussion is: Is it better to use fiction to cover universal problems or only on a given writer's homefront? I hinted at the uplifting ending, which I had some problems with, given its unbearably quick turnaround and resolution. However, the more I thought about it, the more I realized that it made perfect sense in the context of the novel as a whole. As true as the actions feel, it's Saramago's style to have events not completely grounded in physical reality. A final quote from Conrad's article sums this up perfectly, and it can either be a compliment or a criticism, depending on who reads it: