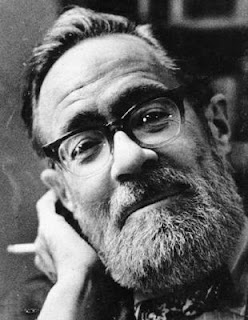 "The reader's resulting uncertainty is just what [John] Berryman intended. A reader was meant to keep wondering who is talking to whom. Berryman believed that the hallucinatory effect of such doubt and ambiguity added to the richness of the passages that produced it (Merwin xxv)."

My past few poetry posts have been focused on, for lack of a better phrase, safe bets. Whether I've looked at T.S. Eliot or Charles Bukowski, I've analyzed works with the best intentions, but highlighted with a quiet understanding of what I was getting myself into, so to speak. These are gifted, honorable poets, for sure. However, in the interest of familiarizing myself with other poets, I asked around for recommendations. A friend of mine immediately suggested John Berryman, which led to me picking The Dream Songs. Going into a work of fiction without any prior knowledge of a given author is exhilarating for me. With poetry, however, there is a deal of trepidation, specifically the fear that I'll miss obvious references or the meaning of the poem altogether.

As I read the poems of Berryman, the trepidations are still present, and I'm sure there are some references and wordplays that I haven't picked up on at first glance. Despite these admissions, Berryman's gifts are on full display. He wrote with an intangible combination of rigid structures and almost freestyle verse and dialogues. While I would have picked up on this notion eventually, W.S. Merwin's introduction is invaluable. He gives insights into Berryman's psyche, yet not to the point of over analysis or intentionally confusing the poet with the poem. Merwin acknowledges the inherent difficulty in studying these poems, but also asks the reader to simply enjoy the language on display. As with any modern poet, there are hints of poets who have come before in Berryman's works (Eliot and Dylan Thomas come to mind).

While linking a writer and a work can be wrong at times, one must realize that Berryman was known for being a Confessional poet, and he himself acknowledged autobiographical meanings in his poems. This idea of 'confession' comes across more as 'contrition,' at least in my mind. Here is a stunning example, especially when viewed with the understanding of Berryman's lifelong battle with alcoholism:

Under the table, no. That last was stunning,
that flagon had breasts. Some men grow down cursed.
Why drink so, two days running?
two months, O seasons, years, two decades running?
I answer (smiles) my question on the cuff:
Man, I been thirsty.

The brake is incomplete, but white costumes
threaten his rum, his cointreau, gin-&-sherry,
his bourbon, bugs um all.
His go-out privilege led to odd red times,
since even or especially in hospital things get hairy.
He makes it back without falling.

He sleep up a short storm.
He wolf his meals, lamb-warm.

Their packs bump on their '-blades, tan canteens swing,
for them this day my dawn's old, Saturday's IT,
through town toward a Scout hike.
For him too, up since two, out for a sit
now in the emptiest freshest park, one sober fling
before correspondence & breakfast (Berryman 113)."

I feel that this poem serves as a sort of composite of the ideas listed above. Along with the notion of the confessional, there are hints of sadness, unapologetic drunkenness, and a sort of common street dialogue. The majority of his poems three six-line stanzas, so the two-line addition (the second to last stanza) seems to break up the rhythm. The phrase that strikes me the most is "one sober fling," as if a moment of sobriety is a wild notion in an otherwise inebriated existence. Overall, it's as if Berryman's style could be a subdued version of Bukowski, a tighter, less obvious look at excess as a regular part of one's daily schedule.