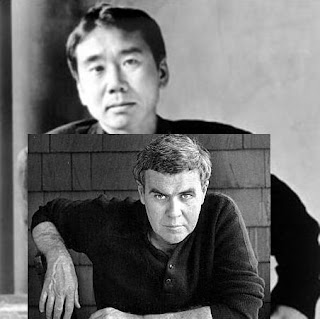 As I hinted with my look at Tropic of Cancer, most of my posts in the coming months will deal with literature, primarily authors whom I may have overlooked thus far, albeit unintentionally. My latest reading, Haruki Murakami's The Elephant Vanishes, turned out to be a stone that killed a few birds. Not only is he an author I should have read years ago, but his works represent international fictions, an area I haven't touched much since my looks at Roberto Bolano. The final side of this stone is that The Elephant Vanishes is a short story collection, and anyone familiar with this blog knows my strong admiration for this art form.

Any discussion of Murakami might very well turn towards the label/designation of his writing as postmodern. While a few of his stories fall into that category, I want to avoid any looks at the notion of postmodernism, only because I feel that it can occasionally be too all-encompassing, sometimes to a fault. Without reviewing some of my older posts, I'm almost certain that I've made this argument before. Postmodernism is an undeniable literary style, but one that tends to be used too frequently. Also, despite Murakami's lauded place in international fictions, my reading brought to mind the idea of "the classic," not in the old-fashioned sense, but in another (sometimes overused) phrase, "the classic short story." One of the best creators of the short story was Raymond Carver, and I noticed striking similarities (this is meant in the best way possible, not to disparage either writer) between the story crafts of Murakami and Carver. A friend of mine brought to my attention that Murakami not only translates Carver's works into Japanese, but professes an admiration for the late writer.

The similarities are not limited to these two men, but rather, they span the details of what most people consider a "good" short story. One of these details is precisely that: a detail. Murakami and Carver undoubtedly prescribe to James Joyce's famous maxim that "a writer should always know how much change a character has in his pocket." These details tend to go overlooked in everyday life, but in the medium of the short story (and, of course, the novel) they are elevated above the everyday and fill in vital details about the characters. For example, a usual feature of anyone's day is food.

"Like a guest invited to dinner by a feuding married couple, Noboru Watanabe tried to come between us by asking me, 'Have you ever thought of marrying?'
'Never had the chance,' I said as I was about to put a chunk of fried potato in my mouth. 'I had to raise my little sister without any help, and then came the long years of war...'
'War? What war?'
'It's just another one of his stupid jokes,' said my sister, shaking the bottle of salad dressing (Murakami 179)."

"My large parties are gone now and also the old couple. The place is emptying out. By the time I serve the fat man his chops and baked potato, along with more bread and butter, he is the only one left.
I drop lots of sour cream onto his potato. I sprinkle bacon and chives over his sour cream. I bring him more bread and butter.
Is everything alright? I say.
Fine, he says, and he puffs. Excellent, thank you, he says, and puffs again.
Enjoy your dinner, I say. I raise the lid of his sugar bowl and look in. He nods and keeps looking at me until I move away (Carver 6)."

Of course, these are not what the respective stories are all about, but in both examples, food highlights the larger themes and activities (more explicitly in the Carver passage). The story, "Fat," focuses on a waiter describing a heavy-set diner, with the unspoken notion of social stigmas. In Murakami's "Family Affair," food is part of a family dinner, with the unspoken notion of blunt conversations not associated with the usual Western assumptions of Japanese societal norms (another point is to note is that criticism of Murakami is that he is too influenced by the Western authors he admires).

This leads to the strong depictions of family life tinged with unhappiness and disappointment. In this sense, Carver and Murakami share a literary version of dynamic equilibrium, i.e. "the more things change, the more they stay the same." Murakami hints at less than stellar relationships with a noticeable degree of tact, whereas Carver is much more blunt and visceral. Is this due to a difference in literary styles, or a difference in society--Western emotions versus Japanese restraint? Arguments could be made for either, although their styles are not completely set in stone. Carver has passages of quiet observation, while Murakami's characters can be very abrasive and occasionally antisocial. Here are examples of Carver's emotion and Murakami's restraint:

"'Listen, listen to me, Ralph,' she whimpered. 'I swear to you he didn't. He didn't come. He didn't come in me.' She rocked from side to side in the chair.
'Oh God! God damn you!' he shrieked.
'God! She said, getting up, holding out her hands, 'Are we crazy, Ralph? Have we lost our minds? Ralph? Forgive me, Ralph. Forgive--'
'Don't touch me! Get away from me!' he screamed. He was screaming (Carver 238)."

"We're still happy, of course. I really do think so. No domestic troubles cast shadows on our home. I love him and trust him. And I'm sure he feels the same about me. But little by little, as the months and years go by, your life changes. That's just how it is. There's nothing you can do about it. Now all the afternoon slots are taken. When we finish eating, my husband brushes his teeth, hurries out to his car, and goes back to the office. He's got all those sick teeth waiting for him. But that's all right. We both know you can't have everything your own way (Murakami 79)."

And here's an example of a calmer Carver and a more agitated Murakami:

"He stood naked on the tiles before getting into the water. He gathered in his fingers the slack flesh over his ribs. He studied his face again in the clouded mirror. He started in fear when Marian called his name.
'Ralph. The children are in their room playing. I called Von Williams and said you wouldn't be in today, and I'm going to stay home.' Then she said, 'I have a nice breakfast on the stove for you, darling, when you're through with your bath. Ralph?'
'Just be quiet, please,' he said (Carver 251)."

"I closed my eyes and kept them shut. Then I opened them and looked at my son's face again. And then it hit me. What bothered me about my son's sleeping face was that it looked exactly like my husband's. And exactly like my mother-in-law's. Stubborn. Self-satisfied. It was in their blood--a kind of arrogance I hated in my husband's family (Murakami 104-105)."

Another proof that struggling relationships transcend regions and emotions is that both of the Murkami passages come from the same story ("Sleep"), the same with the Carver passages ("Will You Please Be Quiet, Please?"). The beauty here is that the emotional hypotheses I presented are both valid and invalid, depending on how one reads the given stories. They can be bent slightly to prove these points or thrown away altogether.

The final idea I'd like to mention is the reoccurring theme of unresolved problems and clashes (a postmodern trait?). With both writers, the usual ending of a given story is very logical, yet the given problems or questions are rarely resolved, thereby making the reader either a.) come up with their own conclusions as to where the characters are headed, or b.) take the story as a small piece of a much larger issue. This is a major part of my fascination with both writers, a fascination that has stretched for a few years now (beginning with early readings of Carver while in college and continuing with the recent readings of Murakami). There is nothing at all wrong with a short story that ends with a satisfactory conclusion, yet I've noticed a trend in my own story writing that follows the same open-ended conclusions...in other words, stories that logically leave someone wanting more information in a bad way should instead be looked at as realism. In everyday life, problems and issues are not resolved within the sum of a few pages. With writers as gifted as Carver was and Murakami is, these gentle and abrupt fadeouts lead to reader discussion and heavy contemplation of what will happen next. Small ideas like these might seem obvious, but can be easily lost in the never-ending discussion of what compromises a good piece of writing.

Carver, Raymond. Will You Please Be Quiet, Please? Copyright 1991 by Tess Gallagher.