"From Here to Eternity"--Revisionist Film History 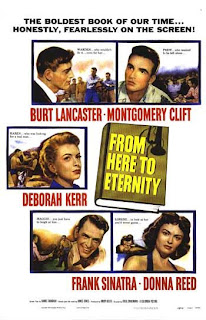 Despite my earlier promise to have more book essays posted (these will be coming in the following weeks), this film piece is something that I've been mentally working on for quite some time. I read James Jones's novel From Here to Eternity in high school, so naturally, my memory of it is hazy at best; therefore, this essay will exclusively examine Fred Zinnemann's 1953 film adaptation. Perhaps the title of this piece is slightly misleading. I'm not so much going against the film as it is generally viewed, but taking another look at the inherent themes. Whether one is discussing books (Ken Kesey, Kurt Vonnegut) or films (Easy Rider, Five Easy Pieces), the general consensus is that the anti-establishment movement had its strongest presence in 1960s and 1970s American culture. This is absolutely true, but I feel that From Here to Eternity is an overlooked precursor to the independent boom of filmmaking in the following decades.

However, at first glance, this is a war film, set in the days before the Japanese attack on Pearl Harbor. Pvt. Robert E. Lee Prewitt (Montgomery Clift) transfers to Schofield Barracks for "personal matters." Almost immediately, he's under the scrutiny of Captain Holmes and Seargant Warden (Burt Lancaster). Prewitt refuses to join the company boxing team, coached by Holmes, due to the aforementioned personal reasons. The plot plays out literally, with the characters all connected to the events and emotions. Warden is of lesser rank than Holmes, but the obvious leader of the company. After Prewitt's cold refusal to Holmes's request to join the boxing team, Warden frankly tells him: "It's my job to keep him happy, see? The more he's happy, the less he bothers me, and the smoother I run his company." Prewitt's only friend is Angelo Maggio (Frank Sinatra), a fun-loving, happy outcast (in his first scene, he's shown sweeping in front of the main office, undoubtedly a punishment for something). As the film progresses, Warden starts a sudden affair with Karen (Deborah Kerr), the cold, unhappy wife of Captain Holmes. Prewitt falls for Lorene (Donna Reed), a prostitute at a brothel frequented by Maggio (of course, in the film, it's a dance hall, but anyone can look past the mild censorship to gauge the actual setting).

This might seem to be a very quick, condensed summary of the major plot points, but in re-screening the film, it's amazing how quickly everything is established. Since this is a character-driven film, the best way to analyze the anti-establishment themes is to look at the characters individually.

Sgt. Warden: Especially portrayed by Burt Lancaster, he's the ultimate military character--strong, assertive, no-nonsense, and efficient (a wonderful word which is employed in his second scene with Karen). However, his hatred and dislike of Captain Holmes manifests itself in his affair with Karen; to put it bluntly, he has sex with her as a way to rebel against his superior, all while maintaining his assertiveness and professionalism while on base. To take this to the extreme, it's a grudge-fuck towards Holmes. His rebellion only goes thus far; he and Karen do not end up together, only because he's in love with the military.

Private Prewitt: He's the victim of extreme hazing, but steadfast in his duties ("I can soldier with any man"). He does his job as best as he can, despite the unfair obstacles placed in front of him, the hazing and "treatment" designed to make him look like a failed soldier. Despite this, he's vastly independent, or at least he should be, given his solitude. (Spoiler alert) Just in the same way Warden's affair with Karen can be seen as rebellion, Prewitt's decision to return to the base during the Japanese attack can be seen as proof that he really wasn't meant for the Army, but instead to be his own man. He returns, critically injured after a knife fight, to do his job, and ends up dying as a result. I'm not saying that his being a soldier ended up killing him. No matter where the film was set, no matter what the occupation, Prewitt never would have lasted in a place that required submission and conservative views.

Lorene: She's a prostitute, therefore immediately placed on the fringes of a conservative society. She fully realizes this, and claims that she's only doing it in order to save money to start a new life. However, in one of the most intense scenes in the movie, she angrily describes a "safe" and "proper" life: country clubs, a successful husband, and proper children. Her voice and the look in her eyes might suggest that she finds this unattainable, but in my view, she doesn't want to be part of what society expects of her. Granted, she obviously doesn't want to be a prostitute the rest of her life, but she strongly rebukes the notion of 1950s suburban America.

Angelo Maggio: Like Prewitt, he was never really meant to be a soldier, seeing that he spends his time looking forward to off-duty carousing with his friends, his women, and his booze. Without Prewitt, one gets the idea that he's a marginal soldier, doing just enough to not be dishonorably discharged, but not enough to be respected in his outfit. Given his free-spirited ways, and given the context of the film, he'd be a perfect fit amongst the beat generation. His desire to be free from responsibility leads to his going AWOL, therefore resulting in his death (after he's beaten and abused by Seargant Judson). It's the opposite of Prewitt, but with the same results. Prewitt returns to what he thinks he's supposed to do, and he dies. Maggio escapes to do what he's supposed to do, and he dies as well.

Karen Holmes: She falls into the anti-establishment theme by completely and unapologetically rebelling against her husband. Their relationship is purely for show, to create the image of a happily married couple in order to advance his military career. Their home life is full of resentment, bitterness, and the complete lack of any sort of intimacy. He sleeps around, but not because he's a great lover, but mainly to compensate the fact that he will never satisfy his wife, both sexually or emotionally. Even without knowing that she's sleeping with Warden, he knows that Warden is more of a man than he is, whether in the Army or in the civilian world. Karen is content to aid in Holmes's complete emasculation.

These notes would obviously be aided by screencaps or more plot discussions, but since From Here to Eternity is such a classic, the elements I've discussed should be understandable to anyone familiar with the film. I consider it part of the anti-establishment era of filmmaking, because of the characters. It doesn't measure as an "anti-war" film, because the war scenes are so fleeting, and come towards the ending. Therefore, we're looking at a film that's not Platoon or Full Metal Jacket, but a character study of people who do not fit the sanitized view of 1940s and 1950s America.
at April 23, 2009

There is a bigger message to this film and to Jones' book - and that is that war or no war, the army is absolute in its power. Those that join it, by oath or by marriage, live the army way or die.

Milt Warden is the closest thing to a survivor in this world, and even he isn't very close. Prewitt and all the others are just getting what the Army had in store for them.