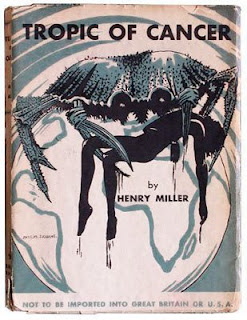 Note: One of the cited passages is Not Safe For Work.


In the coming months, I hope to read and write about more books, both old and new, that have eluded me thus far. This elusion, at least in the immediate sense, was highlighted by Facebook. Anyone familiar with this social networking site knows the sheer volume of lists and notes changing hands and inboxes with much fervor. Last month, several book lists were sent to me, in order to gauge what people have read of the classics, and I was chagrined to have read only seventeen out of one hundred books on one of those lists. While I'm normally pleased with the consistency of my reading, I figured that I needed to get some important works under my belt. This led to my picking up Henry Miller's Tropic Of Cancer.

Going in, my knowledge of the book was its infamy as a banned book (all the more reason to read it), as well as its role as a major plot point in an excellent episode of Seinfeld. In mentally outlining this essay, I wondered if it would be possible to get the "dirty talk" out of the way early, or if it was simply integrated into the story as a whole, essential to any look at any given passage. There is nothing puritanical in my reasoning. Much like the teenage versions of the Seinfeld characters, it's understandable that some people might want to jump ahead to the sexual parts in lieu of taking everything in. With this analysis of Miller, forgive the unintended sexual puns. In fact, the very title of this essay could be a pun itself. My reasoning behind the essay title is my view of Tropic Of Cancer as a whole. I'll get to this in a minute. First, let's talk about sex. Even for someone not familiar with the work, it's well known that Miller's effort was banned in the United States until 1961 under censorship lows, primarily due to its frank descriptions of sexual acts. Forgive the following gratuitous citation, especially coming from an explicit book that doesn't have the slightest air of gratuity:

"A young cunt doesn't have to have any brains. They're better without brains. But an old cunt, even if she's brilliant, even if she's the most charming woman in the world, nothing makes any difference. A young cunt is an investment; an old cunt is a dead loss. All they can do for you is buy you things. But that doesn't put meat on their arms or juice between the legs. She isn't bad, Irene. In fact, I think you'd like her. With you it's different. You don't have to fuck her. You can afford to like her. Maybe you wouldn't like all those dresses and the bottles and what not, but you could be tolerant. She wouldn't bore you, that I can tell you. She's even interesting, I might say. But she's withered (Miller 114-115)."

Since Tropic Of Cancer is so influential, one can see how passages like these set the stage for any future author known for writing so bluntly--everyone from James Jones in the 1950s, Bret Easton Ellis in the 1980s, Chuck Palahniuk in the 1990s, and so on. Isolated, we can see the shock that would have greeted readers in the early/mid-twentieth century. Today, we can pick out the example of misogyny. However, when put back into the context of the whole novel, we as readers get used to it very quickly and we read sordid passages with the same eye as everything else. For any Miller novice, even one accustomed to novels with graphic sex, it's almost impossible to not read the opening pages like a ten year old, giddy over what the hype is about.

The novel is extremely autobiographical, almost to a fault. We're treated to a vibrant supporting cast, seen through the almost skeptical, tongue-bitten eyes of Henry Miller, the narrator:

"I am trying ineffectually to approach Moldorf. It is like trying to approach God, for Moldorf is God--he has never been anything else. I am merely putting down words...
I have had opinions about him which I have discarded; I have had other opinions which I am revising. I have pinned him down only to find that it was not a dung-beetle I had in my hands, but a dragonfly. He has offended me by his coarseness and then overwhelmed me with his delicacy. He has been voluble to the point of suffocation, then quiet as the Jordan.
When I see him trotting forward to greet me, his little paws outstretched, his eyes perspiring, I feel that I am meeting...No, this is not the way to go about it (8-9)!"

These supporting characters are well-written, but there's never any doubt that they're second to Miller. No matter how many pages are devoted to them, Miller is either right there with them or describing them with, at the very least, a heavy air of opinion. What they do, he often does; what they think, he often opines upon; and whom they sleep with, he often has the chance to do the same.

One of Miller's amazing strengths was the ability to write gripping, dream-like passages in the stream of consciousness style. This at times might appear to be easy, but it takes a great writer to place words,which are supposed to feel random, very carefully. I admire the writing of William S. Burroughs, yet I remember feeling bored with some of the drug-hazed passages in Naked Lunch. Miller writes streams of these random thoughts with skill, literary flair, and attention.

"Coming through the high driveway into the quadrangle a sense of abysmal futility always came over me. Outside bleak and empty; inside, bleak and empty. A scummy sterility hanging over the town, a fog of booklearning. Slag and cinders of the past. Around the interior courts were ranged the classrooms, little shacks such as you might see in the North woods, where the pedagogues gave free rein to their voices. On the blackboard the futile abracadabra which the future citizens of the republic would have to spend their lives forgetting. Once in awhile the parents were received in the big reception room just off the driveway, where there were busts of the heroes of antiquity, such as Moliere, Rancine, Corneille, Voltaire, etc., all the scarecrows whom the cabinet ministers mention with moist lips whenever an immortal is added to the waxworks (277-278)."

Despite all of these compliments, and my newfound understanding of Tropic Of Cancer as an American (or should I say French?) classic, I did find the occasional fault in the book. Since the best of Miller's passages are so memorable, these highs can make the connecting passages and pages unintentionally tedious. Granted, rare is the perfect novel that never stumbles. Overall, its brilliance and captivation come in varying frequencies, rising and dipping noticeably. These dips are simply stretches that don't hold attention very well. However, Miller's greatest skill is his writing on human nature and tendencies. He makes no apologies, does not elevate the good deeds, nor does he frown upon the bad ones. The characters are presented honestly, with any opinion left to the reader or anyone with the most basic understanding of said human nature. The best example of this comes toward the end of Tropic Of Cancer. These words might appear simplistic, but don't be fooled. It says everything we need to know about the lives presented in the novel.

"Human beings make a strange fauna and flora. From a distance they appear negligible; close up they are apt to appear ugly and malicious. More than anything they need to be surrounded with sufficient space--space even more than time (318)."