The Man Of the Hour 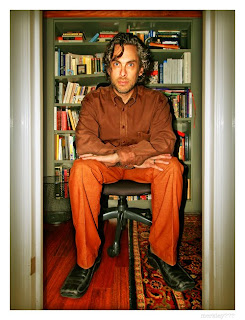 "This is an essential element of the business of being a man: to flood everyone around you in a great radiant arc of bullshit, one whose source and object of greatest intensity is yourself. To behave as if you have everything firmly under control even when you have just sailed your boat over the falls. 'To keep your head,' wrote Rudyard Kipling in his classic poem 'If,' which articulated the code of high-Victorian masculinity in whose fragmentary shadow American men still come of age, 'when all about you are losing theirs'; but in reality, the trick of being a man is to give the appearance of keeping your head when, deep inside, the truest part of you is crying out, Oh, shit! (Chabon 129)"

The above passage does wonders for me. The cultural and genetic aspects of masculinity have long been of interest to me, both in studies and in the writing of my own fiction. Re-read it, and you very well may see some glaze of the cliche of "being a man," as well as the undercurrent of many a tired stand-up comic's jokes. However, on the sheer strength of his writing style, Michael Chabon renders a part of masculinity utterly unique, even though it's been shared by every man at times. With crisp writing, honesty, and a well-placed citation, he's elevated what could very well have been blatantly obvious in lesser hands.

I recently finished reading his latest essay collection, Manhood For Amateurs. During the course of the reading, it struck me that, despite his staggering publication resume, I've never read any of Mr. Chabon's non-fiction. I've read two of his novels and one of his story collections, and despite having some catching up to do with his complete bibliography, I've long counted him as one of my favorites. Happily, this collection reaffirmed this, and elevated him (in my personal views) among the champions of fiction and non-fiction, being able to create stunning paragraphs, "real" or otherwise. In addition, the collection has masculinity as its central theme, even if not every essay deals with it explicitly.

Chabon tackles the usual topics--marriage, youth, and fatherhood--but gives them all a colorful spin, even if the only light that's shed upon the topics are for his own growth and personality. It's a nod to his strengths as a writer that he can make the most mundane occurrences feel vibrant. It also helps that, even when taking on a philosophical hypothesis, he can be hysterically funny without distracting from the subject at hand. For example, in the essay "The Memory Hole," he writes about the act of a parent throwing away a young child's artwork:

"Do I care? Does it pain me to have lost forever this irrefutable evidence of my having been, if neither a prodigy nor an embryonic Matisse, a child? If my mother had held on to more of my childhood artwork, would I be happier now? Would the narrative that I have constructed of the nature and course of my childhood be more complete? I guess ultimately, I have no way of answering these questions. It's like wondering whether sex would be more pleasurable if I had not been worked over by that old Jew with a knife at the age of eight days. How much more pleasurable, really, do I need it to be (38)?"

In addition to his writing prowess, Chabon is also a gifted vocal interpreter of his own essays. Two nights ago, I had the good fortune to see him read two of the essays at Chicago's Harold Washington Library. His timing, enunciation, and inflections provided not only humor to the funny parts of "The Cut" (about his son's circumcision) and "Like, Cosmic" (a wonderful narrative of space travel, the passage of time, and ultimately, masculinity) but somber reflection on the central themes of these works. His reading highlighted quite a few parts that I had missed in my intial reading, as well as highlighting his gift of craft. His prose is almost musical, and even if a given passage is embellished with grand metaphors, not a word feels out of place or overused. Despite being behind on quite a few of the notable books that have been published this year, I can say, with full conviction, that Manhood For Amateurs is one of the best books of 2009.