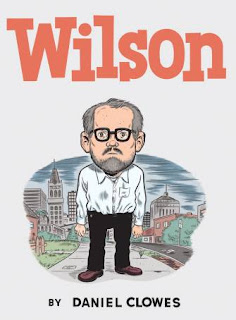 Even for someone like me, a reader who doesn't partake of many comics or graphic novels, Daniel Clowes is an artist who is at least passingly familiar, which might sound like an insult, but is actually a compliment: Clowes is an artist who has a style that is hard to miss. His cover art for several issues of The New Yorker have been excellent examples of what I take to be his signature: bright colors, a slightly exaggerated comic-book tint, and facial expressions that alternate between bemused and utterly horrified over nothing. The above cover of his latest book, Wilson, is another example. Wilson's head is huge, and his background (both literally and figuratively) is drab and depressing. He's not made out to be hideously ugly, but he's just odd-looking enough to be considered an outsider, and his eyes are drawn to look like he might just burst into tears. No, one should never judge a book by its cover, but the cover of Wilson is both an excellent preview of what's inside, as well as giving nothing about the story away. This immediate contradiction lends itself to the book as well. Wilson is a walking contradiction, a figure both repellent and begging for sympathy. 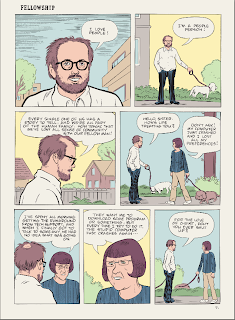 The opening page of Wilson (above) is entitled "Fellowship." While out walking his dog, he calls himself a people person, and one of his comments refers to another motif in Clowes' work, the balancing of contemporary isolation with the realization that most of our contemporary problems are at times silly.
"Every single one of us has a story to tell, and we're all part of the human family. How tragic that we've lost all sense of community with our fellow man (Clowes 7)!"
Wilson's first interaction leads to a woman bitterly complaining about computer problems, and his misanthropic tendencies are revealed immediately when he asks "For the love of Christ, don't you ever shut up?"
The story follows Wilson through his life, from middle-age to old age, detailing his verbal (and sometimes physical) battles with complete strangers, his family, his ex-wife, and his estranged daughter. The chapters are single paged slices, following a more or less chronological pattern, and most of them end with a typical twist, a "telling-it-like-it-is" moment from Wilson, most of which lead to implied awkward silences. The below passage comes from a conversation between Wilson and his daughter, who was put up for adoption when she was a child, about her adoptive parents. The implication was that Wilson and his ex-wife kidnapped her to either create a perverse composite of a family, or to explore and bring closure to the problems that led to all of them breaking apart to begin with early on. However, the true implication is that Wilson's loner tendencies and psychological problems never would have let them become a normal family.

"And I would hope that raising a child would actually enhance one's sense of community, rather than engendering fear and over-compensatory displays of class and wealth...I mean, Jesus, how many cars does one family need? What kind of example is that? Christ, it's like they're laughing at the next generation! 'Ha ha, I used up all your resources! Fuck you!'...But yeah, they're basically really amazing (Clowes 45)."

In virtually every medium, from film to literature to, in this case, graphic novels, the idea of isolation or personal facades is usually done to mask more honest, underlying problems. However, in Wilson, the character's underlying problems are also his blatant problems. I've only read parts of Clowes' Ghost World, but I've screened Terry Zwigoff's 2001 film version several times. In the film (and, while there are major differences between the film and the book), Enid's sarcasm and hipster outside are used to fend off her feelings of depression and a larger quarter-life crisis. As Wilson gets older, he tries to find happiness with a female neighbor, and learns that he has a grandchild. However, his self-destructive personality makes any sort of relationship doomed from the start. Clowes' writing is witty, dark, and thought-provoking at times; his illustrations are vivid and switch between more "realistic" styles and the intentionally cartoonish. However, for all of the great potential flourishes, Wilson is a work that eventually suffers.

I find it difficult to say that I enjoyed Wilson. The plot is very clear, yet is marked by jumps that, while intended to leave specific events to the imagination, make the linear narrative very unsteady. The emotions work much better when the works are taken as single pieces, much like the last one above. Clowes draws with great visuals and emotion, creating everyday scenes that are as weary and uncomfortable as the, well, everyday. His writing is marked by moments of great dark comedy, creating laugh-out-loud situations in the most unlikely of places. However, Wilson's personality is so abrasive, and his life has taken so many wrong turns, that it's hard to find a balance between the aforementioned sympathy and repulsion. It would be an insult to the reader's intelligence to have the book tied up with a satisfying, optimistic conclusion. The whole point of the work is that Wilson will never be satisfied or optimistic, no matter how hard he tries. However, in between moments of dark comedy, Clowes attempts to hint at more philosophical and sociological matters. These never work, since the reader grows accustomed to waiting for Wilson's punchline, the utterance that will upend any carefully crafted thoughts.

The ideas behind Wilson are refreshing. Instead of the graphic novel norms of hipsters and cliched artists, we're confronted with a tortured, depressed individual with no real motivations. It's a difficult work to write about in any real length, partly because, like any visual media, it's best to be read and seen to be fully appreciated. Clowes is very talented, yet Wilson leaves so much to be desired. More continuity wouldn't hurt the offbeat events, nor make them any less surreal. As a collection of individual pieces, this could potentially work. As a scattered story, the problems end up clouding so much of the meaning. Again, I'm still a relative newcomer to the graphic novel genre, but even taking away a literary analysis and viewing the work on its own, the issues don't go away.