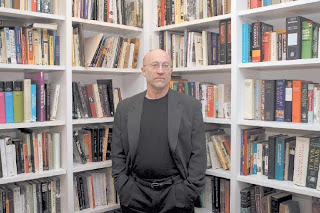 My readings of the late Tony Judt (1948-2010) border, quantity-wise, on the very slim. I've taken in a handful of his essays this past year that were published in The New York Review Of Books, and despite having a lot of catching up to do, his writing style lends itself to a range of feelings. To use a poor metaphor to describe a fine essayist, my introductions to Judt's work was like my introduction to fine scotch. Both educations started off tentatively until the nuances came to fruition, and they took a little bit of time. Judt was a public intellectual in the truest sense, rather than taking the normal pattern of being a talking head. He proved himself to be one of those rare writers with the ability to express complex views while both making them accessible and not dumbing down his tone or language. While it might have made sense to read more of his essays, and therefore gain a better, deeper understanding of his themes, I decided to read Ill Fares the Land, the final book published in his lifetime.

Ill Fares the Land is a rather philosophical look at the sociological, political, and financial woes that have been defining the twenty-first century as of late. This very basic synopsis might make a potential reader take a step back, given that there are literally dozens, if not hundreds of books available that have made attempts to outline or "solve" the American setbacks. Also, much like the political "discourse" as of late, a great too many of these books are carbon-copied conservative screeches and scare-mongering. For a book that has received quiet attention, some of it critical in the past few months, I was struck by how, even with liberal leanings, Judt's writing casts equal blame on both the Left and the Right for the state of the world today. However, said blame never falls into outlandish accusations or name-calling. Judt gives his opinions, but does so with some much-needed constructive criticism. Even from the beginning, the reader gets the feeling that Ill Fares the Land will be an impassioned plea rather than a fall into ridiculous antics. Judt manages to critique both sides in one carefully crafted thought.

"We cannot go on living like this. The little crash of 2008 was a reminder that unregulated capitalism is its own worst enemy: sooner or later it must fall prey to its own excesses and turn again to the state for rescue. But if we do no more than pick up the pieces and carry on as before, we can look forward to greater upheavals in years to come. And yet we seem unable to conceive of alternatives. This too is something new. Until quite recently, public life in liberal societies was conducted in the shadow of a debate between defenders of 'capitalism' and its critics; usually identified with one or another form of 'socialism.' By the 1970s this debate had lost much of its meaning for both sides (Judt 2-3)."

Even in the midst of his histories, examples, and suggestions, Judt makes a recurring theme of the fact that, no matter how saccharine this sentiment may be, we're all in this together. People will always have their own political leanings, the pursuit of wealth will always lends itself to greed and divided classes, and so on and so forth. But, for anybody even remotely interested or concerned about the state of intelligence and communication, Judt's simplicity carries a major punch. From Curtis White to Charles Pierce, I've written about many books that (rightly) decry the lack of intelligence in America's population and mainstream. Judt takes this down a timely path, implicitly decrying the lack of intelligence, but more explicitly decrying the lack of true discourse and discussion in today's political world, especially with all of the problems facing everyone.

"Our disability is discursive: we simply do not know how to talk about these things any more. For the last thirty years, when asking ourselves whether we support a policy, a proposal or an initiative, we have restricted ourselves to issues of profit and loss--economic questions in the narrowest sense. But this is not an instinctive human condition: it is an acquired taste (Judt 34)."

Ideas like these are what elevate this book above the fray; Judt explains that the focus needs to be on human rather than strictly financial levels. However, the financial world needs a lot of work. Using outside quotes and his own views, he states the obvious, yet overlooked, realization that a financial system that consistently widens the gap between the wealthy and the poor is a troublesome system, not one that deserves a shrug and a claim that "oh well, that's capitalism for you...if you don't like it, too bad." He offers his sentiments on the restructuring/redistribution of wealth, but also goes to the basics: economics and finances can be confusing to a layperson (I personally consider myself an excellent example), and not much has been said for more education and understanding of these issues. Again, his writing highlights thoughts that should be common sense but all too often get clouded over.

"Behind every cynical (or merely incompetent) banking executive and trader sits an economist, assuring them (and us) from a position of unchallenged intellectual authority that their actions are publicly useful and should in any case not be subject to collective oversight. Behind that economist and his gullible readers there stand in turn participants in long-dead debates (Judt 105)." 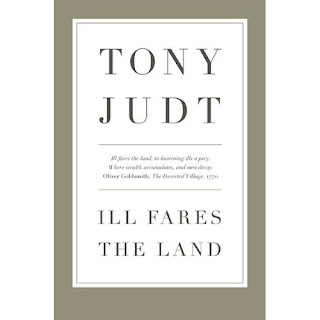 Judt does an excellent job of balancing out his examples. The focus is on the United States, but he does offer historic examples of good and bad financial situations in England, Ireland, and China, to name a few. It goes along with his notion that our current situation simply needs the possibility of what might be outlandish restructuring. At the very least, people need to be open to discussing and thinking about other avenues of change, or other ways of addressing them. If any other public system (he tends to favor and sometimes rely too heavily on the example of public railways) were faltering, it would be relatively easy to address the problem and fix it. But with societies, the ever-growing poor class, and the divide in political life, finding answers can be daunting. However, despite his ease at offering tough, honest condemnations of all political avenues, he does reserve, towards the end, a searing look at the right-wing path and the way discourse is done in that specific arena.

"The perverse effects of this suppression of genuine debate are all around us. In the US today, town hall meetings and 'tea parties' parody and mimic the 18th century originals. Far from opening debate, they close it down. Demagogues tell the crowd what to think; when their phrases are echoed back to them, they boldly announce that they are merely relaying popular sentiment (Judt 172)."

Ill Fares the Land is just as much a written critique of expression as it is of the way society is being run. The above example aside, Judt's argument is that we need to go beyond the traditional paths, as well as explore certain models in their true definitions instead of their twisted meanings in modern discussions (socialism, for example). He's not shy about his opinions, but is also understanding that a lot of people will sit back and assume that everything will right itself again. Divisions between people will always remain, but as he states so eloquently, if they keep growing more strained, the problems that face everyone will only be more divisive. The idea of community has been lost, and its repair is just as, if not more, important as the repair of economic fractures. However, after time, it becomes all too apparent how tightly linked these intangible ideas are.

"If we remain grotesquely unequal, we shall lose all sense of fraternity; and fraternity, for all its fatuity as a political objective, turns out to be the necessary condition of politics itself. The inculcation of a sense of common purpose and mutual dependence has long been regarded as the linchpin of any community. Acting together for a common purpose is the source of enormous satisfaction (Judt 185)."

Another quote from a vastly different source also works as an appropriate closing to these ideas. In an old Calvin & Hobbes strip, in which the two discuss human nature, Calvin asks: "Do you think we'll get smarter?" Hobbes' reply? "That's one of two possibilities."