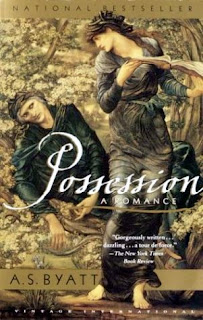 Taking a step back, it's unnerving to imagine what A.S. Byatt's 1990 novel Possession could have been had it been written by someone else. When its themes, genres, and progressions are taken at strict superficial value, we're presented with a book that is heavy on genre fiction, from mystery to thriller, a slight dash of paranormal implications, and a group of characters that virtually wear signs that read "heroic" or "villainous." The full title is Possession: A Romance, and there's plenty of that, from the classic definitions to the contemporary notions. Perhaps I'm beating around the bush--the elements of this novel could have been combined to create a terrible piece, or a work that would be looked at as heavy on the potential, but lacking serious substance. However, when taken in after a full reading, it's just as easy to see how talented A.S. Byatt is as a novelist.

Possession tells the story of Roland Michell and Maud Bailey, two young scholars who come together to research the previously unknown romance between two regarded Victorian poets, Henry Randolph Ash and Christabel LaMotte. Michell is a research assistant to an English Ash scholar, and during his research, he comes across two undated drafts of a letter to a female acquaintance, written in Ash's handwriting. They aren't exactly love letters, but they are undocumented pieces and do hint to the possibility of emotions beyond regular salutations.

"Dear Madam,
Since our extraordinary conversation I have thought of nothing else. It has not often been given to me as a poet, it is perhaps not often given to human beings, to find such ready sympathy, such wit and judgment together. I write with a strong sense of the necessity of continuing our talk, and without premeditation....to ask if it would be possible for me to call on you, perhaps one day next week (Byatt 7)."

Through his inquiries, Roland hypothesizes that Ash's letters were written to LaMotte, and he meets Maud, a feminist scholar, and even before they meet, when her name is first mentioned, the reader has a feeling that something will blossom between the two characters. They're joined by a passion for their respective subjects, and, much like the uncovered romance between the two deceased poets, the reader has to be patient and wait for revelations to be unfolded. Sure, most of them may seem obvious, but Byatt is careful to balance the expected plot developments with the occasional unexpected twist. Once Roland and Maud begin their joint research, the project takes them to LaMotte's former home, where more letters are unearthed. The potential revelations are sure to have a domino effect throughout the literary field, since Ash was supposedly devoted to his wife, and LaMotte, while herself a gifted feminist poet, was thought to have lived her life in social and sexual seclusion. Much like a classic British drama, more characters are introduced, all of whom have their own interests and agendas in the Ash-LaMotte correspondence. In returning to the notion of the "heroic" and "villainous" characters, an excellent example is the terrifically named Mortimer Cropper, an American rival of the professor (James Blackadder) who employs Roland. His introduction is such that, while he's a definite foil, he's created in very sly, revealing tones.

"His face in the mirror was fine and precise, his silver hair most exquisitely and severely cut, his half-glasses gold-rimmed, his mouth pursed, but pursed in American, more generous than English pursing, ready for broader vowels and less mincing sounds. His body was long and lean and trim; he had American hips, ready for a neat belt and the faraway ghost of a gunbelt (Byatt 105)." 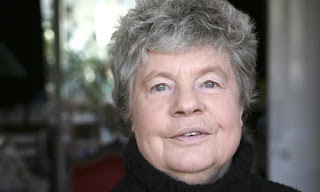 For such a varied plot, Byatt's writing shines in various formats. To begin with the most stunning example, she meticulously "reprints" pages upon pages of poems that were written by the fictional poets. This goes beyond a simple recreation. The poems are beautifully crafted and could easily be actual Victorian citations, not just well-crafted homages to the style. While nobody could blame her for showing off, she's not doing so. Byatt's poems compliment the novel, adding further metaphors to the imagined letters between Ash and LaMotte. To have written such a complex, nuanced novel without fictionalized poetry is a marvel; the combination of the two alone, in this single book, is enough to elevate Byatt's placement among the world's best novelists, male or female.

"What is a House? So strong--so square
Making a Warmth inside the Winds
We walk with lowered eyelids there
And silent go--behind the blinds

Byatt also provides many salutes and winks to the world of academia, specifically in the field of literary and poetic studies. Anyone who has spent any time in a university English Department will appreciate the sometimes tedious nature of research and the understanding that business and funding can sometimes usurp creativity and the bigger picture. The new histories that Roland and Maud uncover, and the way it unfolds, is done very dramatically, almost wistfully. The reality is that a major discovery like that would almost never happen, and the ensuing drama, while sexy, would likely be wishful thinking in real life. However, Byatt rarely veers into truly unrealistic happenings. The bulk of Possession is devoted to the poems and letters of the poets, with the plot serving as a link between the chronology. So while most English majors and PhD candidates would love to have an adventure like Roland and Maud's, the reality is that the true excitement comes from the reading and the research. This serves as excellent ammunition to people who view the Humanities as a waste of time and money. This skepticism is vocalized more than once in the novel, along with the realistic tedium that flares up in even the most passionate personal studies.

"'Funny way to spend your life, though, studying another chap's versifying. We had a sort of poet in this house once. I expect you'd think nothing to her. Terrible sentimental stuff about God and Death and the dew and fairies. Nauseating (Byatt 88).'"

"Much of his writing met this fate. It was set down, depersonalised, and then erased. Much of his time was spent deciding whether or not to erase things. He usually did (Byatt 325)."

Could some of the letters and poems been scaled back, quantity-wise? It's possible, but then again, it would have taken away from Byatt's definite, albeit fictionalized, bibliography. The Victorian words, poems, and even the names of critical texts feel terrifically authentic, and much like real bibliographies, sometimes the extent can be daunting, if not exasperating. This intense attention to detail, coupled with the beautiful writing, is what elevates Possession beyond the aforementioned realm of disposable genre fiction. For a work so steeped in the classics, it's definitely experimental even in the face of the classic story arc. However, while many writers would have the audacity to attempt this, only a select few would be able to make it feel this authentic. There are many plot elements that I haven't explored in this essay, but much like what the characters go through, the joy is in the surprises.