Fear and Loathing, Past and Present 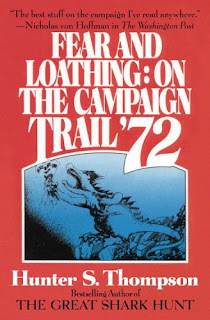 For the past month, I've been reading Hunter S. Thompson's Fear and Loathing: On the Campaign Trail '72 in little bursts, and I coincidentally finished it a couple of days before the 2010 midterm elections. Even before completing it, the phrase "dynamic equilibrium" kept popping up in my head. While I'm sure it has been used in social contexts before, my introduction to the idea came in one of my high school physics classes. I very nearly failed the class, but the definition of dynamic equilibrium amazed me at the time in philosophical ways, rather than scientific. The more things change, the more they stay the same. Thompson's book is full of passages that, while discussing names from the past, could very easily apply to today's political landscape. I've read many articles that attempt to pinpoint the moment in which American politics became such a divide between ideologies, dominated by media (both left and right-wing), and left discussions behind in favor of smear campaigns and, for all intents and purposes, name-calling. In harsh reality, it's been that way for a long time.

"No, this would never do. Not for George McGovern--at least not in May of '72, and probably never. He has spent the past week traveling around Nebraska and pausing at every opportunity to explain that he is flatly opposed to the legalization of marijuana. He is also opposed to putting people in prison for mere possession, which he thinks should be re-classified as a misdemeanor instead of a felony.
And even this went down hard in Nebraska. He came into this state with a comfortable lead, and just barely escaped with a six percentage-point (41 percent to 35) win over Hubert Humphrey--who did everything possible, short of making the accusations on his own, to identify McGovern as a Trojan Horse full of dope dealers and abortionists (Thompson 202-203)."

Smear campaigns? Check. Politicians carefully dancing around issues lest they offend every side of said issue? Check. This description of McGovern (the eventual Democratic Presidential candidate in 1972) mirrors that of President Obama. Before taking office, Obama presented many platforms on gay rights and marriage equality; after taking office, I remember watching one of his speeches, and when he was called upon his views on gay marriage, he was almost at a loss for words, coming up with vague comments on equality and domestic partner benefits. I fully believe that President Obama supports gay and lesbian citizens. McGovern apparently didn't demonize marijuana, but in both cases, it's an example of having to be, well, political. With the opposition ready to jump on your every statement, speaking in cliches and non-opinions becomes the norm.

Thompson supported McGovern, and while the 1972 election was criticized for the way journalists and writers placed themselves among the candidates, Thompson never put McGovern on a pedestal. Like any candidate, he had his strengths and weaknesses. However, one gets the feeling that, much like John Kerry in 2004, the Democratic nominee was viewed not as the best candidate, but rather the anti-thesis to to Republican incumbent. The loss aside, Kerry didn't exactly sweep voters off their feet; rather, it was a case of "well, we need somebody besides George W. Bush." Despite the GOP wins this week, perhaps the outlook for Obama will be better in 2012. Will the following statement hold true for him? Every recent President has had his share of scandal or crisis. The problem with the critiques of President Obama is that the criticisms have veered into conspiracy and false accusations. If the economy brightens, perhaps this opinion from Thompson will hold true for a Democratic President.

"Any incumbent President is unbeatable, except in a time of mushrooming national crisis or a scandal so heinous--and with such obvious roots in the White House--as to pose a clear and present danger to the financial security and/or physical safety of millions of voters in every corner of the country (Thompson 466)." 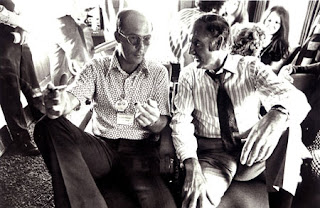 Even before Nixon's re-election, the somber realization was that right-wing ideologies were taking hold in drastic numbers. Some of the passages in Fear and Loathing are extremely prophetic, even in a time before Tea Parties and anti-Obama backlash. Some of the similarities are tame:

"The pervasive sense of gloom among the press/media crowd in Miami was only slightly less obvious than the gung-ho, breast-beating arrogance of the Nixon delegates themselves. That was the real story of the convention: the strident, loutish confidence of the whole GOP machinery, from top to bottom (Thompson 352)."

And some of the similarities are scary, whether looking back or looking ahead:

"Until then, it had not been considered entirely fashionable to go around calling ex-Attorney General John Mitchell a 'prophet' because of his smiling prediction, in the summer of 1970, that 'This country is going so far to the right that you won't recognize it (Thompson 467).'"

These past and present connections are the bulk of what I wanted to present in this post. These may be basic or, if one wanted to be particularly harsh, mere generalizations of party politics. When I looked back at my previous essay on Hunter S. Thompson, I realized that today, just as much as two years ago, he's a difficult writer to truly analyze. He's long been one of my favorites, and as I mentioned before, he's the sort of writer whose image can cloud his actual output. He was opinionated and rarely objective, but he would have been the first one to admit this. But lost (again) in his public image was the fact that he was a brilliant journalist, and his intelligence on his various subjects was unmatched. He described himself as a political junkie, and made the important note that, no matter how one is affiliated with politics or an election, whether as a candidate or a journalist, it brings out the worst in people, sometimes to the breaking point. And really, since all of us are affected by politics, it's one of the few realms in which its impossible to remain emotionally detached. That said, given Thompson's rancor, I would have loved to read his thoughts on Sarah Palin or Rand Paul. I'm sure his opinions on them would have made his views on Richard Nixon seem like a pat on the back.