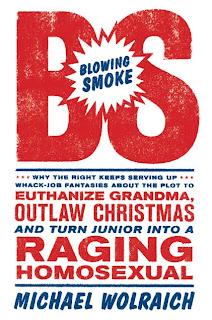 Roughly halfway through my reading of Michael Wolraich's Blowing Smoke: Why the Right Keeps Serving Up Whack-Job Fantasies About the Plot to Euthanize Grandma, Outlaw Christmas, and Turn Junior Into a Raging Homosexual, I realized that the majority of my non-fiction readings in the past few months have been political works. I read books based on a variety of emotions or intentions, and the recent political bent has been no different. I read Hunter S. Thompson around the time of the November midterm elections and found some great parallels; I went into Tony Judt's final book with the hope of better understanding his philosophies. My reasons for reading Mr. Wolraich's book might not be as noble, but sometimes, offbeat reasoning can be beneficial. I selected the book based on its title, and because I felt that it would be a quick read before getting into some more complex writings. This could have been an insult to a relatively unknown writer, along with the fact that I knew from the outset that it would lean toward my own political views; in other words, I knew it would be a work that I would digest in agreement. However, I was pleasantly surprised. Yes, bookshelves across the country sag (literally) with left and right-wing rantings. However, in Wolraich, there's a new voice that's often lacking in political discourse. He's not going to win any friends on the right, but he goes into his critiques with a smile and a big dose of research. A lot of these issues are not laughing matters, but sometimes, one has to laugh even in the face of a scary national landscape.

Blowing Smoke presents a lot of examples of conservative paranoia, most of which are linked by the idea of persecution politics. It's not always the case, but for the most part, right-wing supporters and commentators take critiques and dissent very personally, sometimes morphing them into reverse discrimination. Disagreements become persecutions of someone's (in this case, "someone" being the conservative base) livelihood. The below example is a look at the early Christian right's battle against secular life. It's also an excellent example of Wolraich's use of sly humor, noted when he mentions former Dallas Cowboys coach Tom Landry:

"In addition to the IRS and the Department of Education, conservatives hunted down secular humanists in the courts and in nonprofit organizations like the National Education Association, the American Library Association, NOW, the NAACP, the ACLU, Planned Parenthood, and People For an American Way, to name a few. They also accused secular humanists of controlling the United Nations, Hollywood, and the media. Dallas Cowboys coach Tom Landry, whose political opinions were important because of his coaching record, warned the audience of a massive prayer rally that secular humanism was 'sweeping America (Wolraich 43)."

The notion of being persecuted can also manifest itself as paranoia and conspiracy theories. I would imagine that Wolraich would agree with Charles P. Pierce in the opinion that conspiracies and wildly outlandish ideas are essential parts of the First Amendment. Americans are free to think whatever they'd like. However, while Pierce's entire book was devoted to the notion that the problem starts when the outlandish ideas are thought of as public policy. This is just one of many ideas also presented by Wolraich, that the line between falsehoods, conspiracies, and fringe groups is becoming blurred. A random Google search would reveal many conspiracy theories from both the left and the right, but more and more, the right-wingers are trying to present these notions as facts.

"First, the conspirators plan to deliberately devalue the dollar in order to force Americans to accept a new common currency, called the Amero. (Like the Euro, get it?) The conspirators include the Federal Reserve and numerous foreign entities. Ron Paul speaks vaguely of 'an unholy alliance of foreign consortiums and officials from several governments.' Others name the Rothschilds. Many also suspect King Juan Carlos of Spain for no obvious reason (Wolraich 179)."

Most liberals can just shake their heads at these ideas. But sadly, it does become graver, depending on the subject. It's one thing to feel persecuted when you're disagreed with, and another thing to shamelessly work agendas into serious issues and legislation.

"It is difficult to imagine a more perfect example of right-wing persecution politics than the opposition to the Matthew Shepard Act. A bill designed to discourage hate-fueled violence against homosexuals is represented as a malicious, discriminatory assault on Christians masterminded by the people it was designed to protect. Those who subscribe to this point of view categorically reject the possibility of discrimination against homosexuals in general and Matthew Shepard in particular. Rep. Virginia Foxx (R-NC), for example, insisted that Shepard's murder was a simple burglary gone awry. (No homophobia here, folks, just the bloody pulp of a dying gay man tied to a fence, move along) (Wolraich 74)."

Michael Wolraich is a blogger and contributor to other notable websites, including CNN.com. While Blowing Smoke isn't a collection of previously published material, it's refreshing that, in a sea of bad writing, the stigma of a blogger writing a book is slowly being lifted. This is a thought-provoking work, and not the usual reprinting of cute animal photos from the Internet. His writing isn't perfect; he has a tendency to repeat some of his ideas almost verbatim from page to page and between chapters. However, I found his writing to be very refreshing, in the sense that his book is a plea for level-headed thinking, not just a shake of the finger towards the right (although there is plenty of that). Towards the end of the book, he acknowledges the rational, moderate Republicans who do not subscribe to lies and conspiracy. Has Ann Coulter ever done that for liberals? The scary, sad fact is that conservative commentators, especially Glenn Beck, form a tie to conservative politicians and the conservative public. It's at the point that even in-house critiques become lambasted.

"Rep. Phil Gingrey (R-GA) didn't even last twenty-four hours after belittling right-wing media stars. He too apologized and wrote 'Rush Limbaugh, Sean Hannity, Newt Gingrich, and other conservative giants are voices of the conservative movement's conscience. Every day, millions and millions of Americans--myself included--turn on their radios and televisions to listen to what they have to say, and we are inspired by their words and by their determination (Wolraich 276).'"

In my review of Ill Fares the Land, I cited Tony Judt's opinion that conservative commentators and leaders claim that their views are the majority when they're parroted back by their constituents and audiences. If someone wanted to criticize my enthusiasm for Blowing Smoke, they could easily say that I'm just parroting views that I agree with; hell, I even admitted as much in the first paragraph. However, I wouldn't claim that there's a conspiracy theory to silence my views. Yes, there are fringe groups on the left that have outlandish theories. For example, the liberal majority doesn't think that the George W. Bush administration orchestrated 9/11, but there are handfuls of people who believe this. The fact is, lies are being spread, and voices like Wolraich are not being liberal zombies. Blowing Smoke reminded me of Roger Ebert's stunning essay entitled "Put Up Or Shut Up." One of his quotes that has stuck in my head should be a rallying cry against conservative conspiracies. A difference of opinion is necessary in any discourse, but some people and groups are working to make false claims viewed as unvarnished truth. To close, this is the phrase by Ebert that is a fitting conclusion to any piece like this:

"The time is here for responsible Americans to put up or shut up. I refer specifically to those who have credibility among the guileless and credulous citizens who have been infected with notions so carefully nurtured. We cannot afford to allow the next election to proceed under a cloud of falsehood and delusion."

Work Cited:
Wolraich, Michael. Blowing Smoke: Why the Right Keeps Serving Up Whack-Job Fantasies About the Plot to Euthanize Grandma, Outlaw Christmas, and Turn Junior Into a Raging Homosexual. Copyright 2010 by Michael Wolraich.
at November 21, 2010