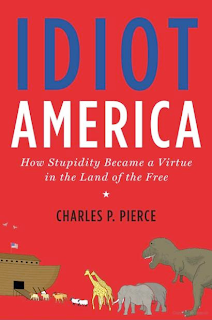 Since I'm currently planning some longer projects, I was recently looking for something quick to read, and I stumbled upon Charles P. Pierce's Idiot America. The book jumped out at me for a few reasons, and seemed to confirm an earlier hypothesis that I read about a few months back. I try to balance my readings of fiction and non-fiction, usually with a ratio of about 2:1. The full title is Idiot America: How Stupidity Became a Virtue In the Land Of the Free, so naturally it kept with my normal interests in studying intelligence and learning, with a strong dash of contemporary American culture mixed in for good measure. There is a left-leaning political bent, but saying that this book is about politics is like saying Pulp Fiction is about boxing. I knew this going in, and the aforementioned hypothesis came from an article in The New Yorker a few months ago. With such a recent wealth of political (right or left) mediums, from books to blogs to television and radio shows, the seemingly understandable assumption that information from all angles could lead to people becoming well-rounded is considerably false. I'm implicating myself in my selection of Idiot America, but people will naturally gravitate towards authors and forums that they know support their given beliefs. I'm sure that Pierce had a number of critics of this book, but I found that, despite my expectations of the subject matter, he highlighted certain ideas and definitions that go beyond simplified "people on the right are wrong."

Right away, and continuing throughout the work, Pierce stresses that it's possible (contrary to what some may believe) to be a liberal, a critic of certain segments of American life, and still be patriotic. He takes care to differentiate between the notion of "idiots" and "cranks." According to him, there's nothing wrong at all with people sharing far-fetched, even downright crazy ideas, provided that said ideas don't eventually take root and become common beliefs or national causes. Being a crank is protected by the First Amendment, and Pierce thinks that this is something to be celebrated.

"This is a great country, in no small part because it is the best country ever devised in which to be a public crank. Never has a nation so dedicated itself to the proposition that not only should people hold nutty ideas, but they should cultivate them, treasure them, shine them up, and put them right up there on the mantelpiece. This is still the best country ever in which to peddle complete public lunacy. In fact, it's the only country to enshrine that right in its founding documents (Pierce 27)."

The above quote may very well sound like pandering to some, but Pierce is right. In some countries, outlandish ideas could have very dangerous consequences. However, when the "nutty ideas" are disguised as common sense, then they move from being the ideas of mere cranks and into the foundation of Idiot America. According to Pierce, the three foundations of Idiot America are: "1.) Any theory is valid if it sells books, soaks up ratings, or otherwise moves units. 2.) Fact is that which enough people believe. Truth is determined by how fervently they believe it. 3.) Anything can be true if someone says it loudly enough." This is where a lot of the critique of the right comes into play.

There are many ways in which this could go, and Pierce covers quite a few of them. His best analysis (or rather, critique) comes from the battle over the teaching of intelligent design. While this may seem commonplace, given that it's been written about and dissected numerous times by numerous sources, it takes on new meaning when applied to the above hallmarks of Idiot America. The current battle over secular policy and the ever-growing Christian right is not new. Once of Pierce's favorite sources is President James Madison and his writings/opinions on freedom of speech and the separation of church and state.

"Citizens had a right to follow any religion they wanted, Madison wrote. They had a right to follow no religion at all. The primacy of the individual conscience was paramount. His language was unsparing. Religion established by the state is of necessity corrupted. Madison 'argues that religion will best support morality if it is free and pure, working up from its independent and spontaneous roots,' observes the historian Garry Wills. Moreover, Madison contends, the commingling of religion and government is inevitably a recipe for civic discord (Pierce 129.)

Other subjects are covered in great detail: the travesty that was the Terri Schiavo circus, the debate between the realities of global warming and global warming deniers, and the aftermath of Operation Iraqi Freedom. However, Pierce's most scathing criticisms go after the rise of conservative talk radio, and how it has shaped the current political landscape.

"Talk radio was the driving force in changing American debate into American argument. It moved discussion southward from the brain to the Gut. Debate no longer consists of thesis and antithesis, moving forward to synthesis; it is now a matter of choosing up sides, finding someone on your team to sally forth, and then laying the wood to each other in between commercials for male-enhancement products.
Talk radio provides a template for the clamorous rise of pundit television and the the even swifter interactivity on the Internet. And, because the field of play has moved from the brain to the Gut, talk radio has helped shove the way we talk to each other about even the most important topics almost entirely into the field of entertainment (104)."

That last word is the most important: entertainment. The landscape (not just on talk radio) reduces important topics to mere soundbites, and as Pierce warns, it's not just the spread of wrong ideas that is dangerous, it's the notion that intelligence is being replaced by stupidity and pandering. People have a right to believe what they want, but the mass simplicity and ignorance spewed by Glenn Beck and Michael Savage are being accepted as truth by a large segment of the populace. On a side note, it's quite telling (for both sides of the political spectrum) that in the same year, 2009, Pierce published Idiot America while Glenn Beck published a book called Arguing With Idiots.

Subject matter aside, I found Pierce's writing style to be quite effective. His research and journalism are strong, but he's best when introducing the stories that shape his themes. He never embellishes his descriptions, but crafts them so they almost read like a sort of storytelling, which in some hands could be very poor. However, Pierce focuses on details, without going overboard, but laced with great creativity. At times, I found myself pleasantly lost in a great narrative while at the same time never forgetting that this is a non-fiction work.

"The Chukchi Sea is a southern child of the Arctic Ocean. The great Pacific storms that barrel through the tropics and then swing north to devastate China and Japan keep coming, roiling and merciless, until they spend themselves in the Chukchi, battering against the hard barrier islands in the far northwest of Alaska. The storms roar themselves hoarse, having finally found a place as implacable as they are. This is where typhoons come to die (Pierce 195)."

Idiot America , as I mentioned before, has its share of critics, and I imagine that a lot of them haven't actually read the book. However, I'm guilty of that too; I criticized Michael Savage on the basis of articles, not the actual content of his political books. I plan on following Pierce's writings and articles in the future. He's a contributor to Esquire magazine, which, along with GQ, can be an overlooked source for well-written, compelling articles. Pierce, like his target audience, is not afraid to let his opinions be known. However, unless the situation calls for it, he's not needlessly angry or insulting. He gives strong examples of past and current cultural problems, and his overall style speaks of something that he says is lost nowadays: common sense. But most importantly, Idiot America is a call for intelligence in discourse, a call for less shouting and more research. People will always disagree on something, but arguments can be thought-provoking instead of crumbling into idiotic name-calling and the spread of false ideals.

Work Cited:
Pierce, Charles P. Idiot America: How Stupidity Became a Virtue In the Land of the Free. Copyright 2010 by Charles P. Pierce.
at June 14, 2010