The Cost Of Perfection 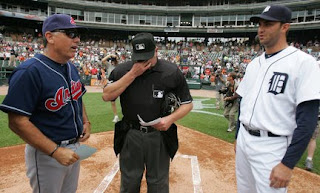 The ninth inning of Tuesday's baseball game between the Cleveland Indians and the Detroit Tigers has been discussed, tweeted, blogged, analyzed, and ripped apart in a few ways in the past two days. My goal for this piece is not to add yet another small part of cyberspace to the discussions of Jim Joyce, but to open, it will help to recap the events. At Detroit's Comerica Park, right-handed pitcher Armando Galarraga was one out away from pitching a perfect game (twenty-seven batters faced, twenty-seven batters retired); this has happened only twenty times in Major League Baseball history. Indians shortstop Jason Donald hit a hard ground ball to Tigers first baseman Miguel Cabrera, who threw to Galarraga at first base. The throw beat the runner by a full step, but first base umpire Joyce blew the call and signaled safe, ending both a perfect game and a no-hitter. Galaragga ended up pitching a fine 1-hit shutout, but immediately following the game, there was a surge in media, with the majority of people calling for either a reverse ruling from Commissioner Bug Selig, the firing of Joyce, or both.

Just as quickly, Joyce acknowledged his error, and before the Indians-Tigers game on Thursday, Galarraga met with Joyce at home plate, giving him the lineup card, and symbolically forgiving the man for the mistake. Selig decided against an executive decision to award Galarraga a perfect game, and for the most part, all seems to be forgiven, if not forgotten. Tigers manager Jim Leyland stressed that everyone in baseball makes mistakes, and while it would have been a historic feat, the Tigers won 3-0 and remain just a few games out of first place in the American League Central Division. Had Joyce clenched his fist for an out call instead of waving his arms for a safe call, it would have marked the third perfect game in the 2010 season. The previous two were thrown by two vastly different pitchers, showing both the "obvious" expectations and the randomness of such a feat. 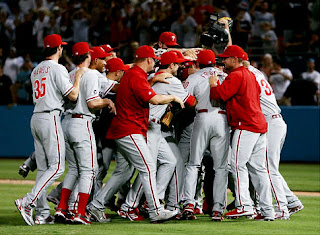 Roy Halladay of the Philadelphia Phillies threw a 1-0 perfect game against the Florida Marlins on May 29th, and his career is such that he's the type of pitcher one would "expect" to throw a perfect game (forgive the constant quotation marks; what I love about baseball is that certain ideas have to be marked with them, combining normal statements and what could be perceived as far-fetched opinions). He's a former Cy Young winner with dominant pitches, and he routinely throws complete games in an era that doesn't allow that to happen as often. Halladay has accumulated many shut-out games, and has come close to throwing a no-hitter before. The coverage of his May 29th game was normal, but in the back of my mind, it was almost an anti-climax, along the lines of "well, it's Roy Halladay. It was bound to happen sooner or later." See also: Randy Johnson's perfect game in 2004. 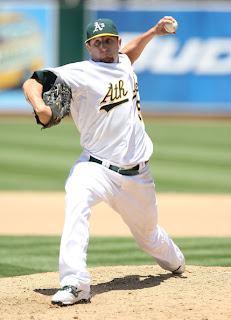 But nobody expects a perfect game, especially not the fans who saw Dallas Braden pitch one on May 9th. Not only was Braden barely known outside of the Oakland area, his game came with the kind of supporting stories that almost seem fictional: he pitched his perfect game on Mother's Day, years after losing his mother to cancer. Before, after an on-field argument with Yankees' third baseman Alex Rodriguez, Rodriguez said that he didn't want to increase Braden's "fifteen minutes of fame." Assuming that Braden's career stays along its course (he's currently 4-5 with a 3.77 ERA), he'll retire with that perfect game being his major feat. That's not necessarily a bad thing, depending on how much he wants to publicize it. Don Larsen threw a perfect game in the 1956 World Series and has spent decades enjoying that publicity. See also: David Wells' perfect game in 1998.

So what if Galarraga had officially been perfect on Tuesday night? The excitement and attention would have been the same, but, and this is not meant to be pessimistic, it might have been lacking. Wells' perfect game was followed the next year by David Cone's, and at the time, it was shocking that two rare pitching milestones had been reached in such a short timespan. After Braden's gem, it was less than a full year since the previous perfect game, thrown by Chicago White Sox ace Mark Buehrle. Once Halladay became the twentieth man to tally one, it was generally agreed that it would never happen again in such a short span. Then, a week later, Galarraga almost made history.

The 2010 season has been dominated by pitching, but that has no bearing on these rare games. It's a combination of great pitching, great fielding, and the occasional break in which a hit ball or a strike call could go either way. Had Joyce properly called Jason Donald out, baseball fans would have been spoiled yet again, after the exciting hangover of the past month. But, it might have been lackluster. When a rarity happens too often, it's not nearly as exciting. The 1990s saw four perfect games; the 2000s saw two; and the 2010s have seen almost three in less than a month. Maybe Galarraga would have been the last for twenty years, or maybe there will be another one thrown in August. But even though he lost out, his interactions with Joyce has gained the young pitcher even more respect, when he rightfully could have been sulking over his lost chance at history.

But now, more than ever, when fans settle in for the first pitch, the looming idea of random magic will be even more palpable this season. For a game of numbers, there are plenty of wonderful intangibles to be rightfully discussed. And even though it won't go in the record books, Galaragga was perfect on Tuesday night, even if he gave up that one "hit."
at June 04, 2010