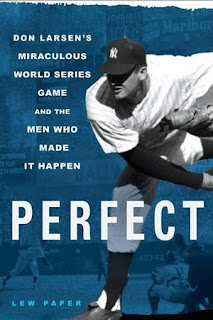 So far in 2009, the book world has seen a stunning wealth of baseball books, spanning an excellent, diverse array of subjects that appear fitting for involved, book-length studies--Thurmon Munson, Satchel Paige, and a joint interview between Bob Gibson and Reggie Jackson. However, the one baseball book that I've read so far this year would, at first glance, seem like a tired subject: a New York Yankees championship team. After the Yankees won their 27th World Series last night, I'm sure that most people (myself included) have had their fill of superlatives and outlandish hyperbole, and aren't interested in books or reviews about the team, no matter what era is being discussed. With baseball season now over, the focus will and should shift completely to football and basketball. However, Lew Paper's Perfect: Don Larsen's Miraculous World Series Game and the Men Who Made It Happen proved irresistable for me. The subject (Don Larsen's perfect game in the 1956 World Series) is well known to baseball fans, but lends itself to wanting more analysis and facts. On top of that, Chuck Klosterman gave the book a strong review in Esquire magazine.

Despite my interest, I nearly stopped reading this book after only half a page. The prologue is entitled "The Moment Of Truth," and begins with this opening:

"The tall right-hander peers down at the catcher from his perch on the pitcher's mound under the fading afternoon sun in the cavernous environs of Yankee Stadium (Paper 1)."

The tired title, coupled with the even more tired description of Yankee Stadium as "cavernous" made me worry that the rest of the book would be filled with obvious metaphors and overwrought attempts to convey the "magic of baseball's Golden Age." Even as someone in my mid-20s who never saw baseball in the 1950s, there are enough books and documentaries that depict baseball at its acme in the mid twentieth century. I kept going, and was happy to find that the book provides extremely detailed biographies of the players on both teams (the Yankees and the Brooklyn Dodgers). For baseball fans, some of these are well-known (Mickey Mantle's alcoholism, the stunning racism expressed towards Jackie Robinson), but Paper does a great job of giving the lesser known players the same amount of coverage as the legends. For example, before picking this book up, I had never heard of Dodgers outfielder Carl Furillo, and Paper's profiles work extremely well, educating the reader on the backgrounds of the players. The chapter on Furillo depicts him as an above-average baseball player, even if he's not as well known as some of the other men from that era:

"Furillo knew all about the trickery of the right-field wall [of Ebbets Field], and he meant to master it. 'He was a workman,' teammate Carl Erskine later said of Furillo. 'I studied every angle of that fucking wall,' Furillo later explained. He would have teammates hit him flies so that he could see how the ball responded to different situations. In time, he knew every quirk. When a sportswriter later asked him how he learned to play the wall so well, he had a simple response: 'I worked. That's fucking how.'(83)."

Paper also does a commendable job as a journalist, showing an unbiased look at both the positives and negatives of the individuals. Furillo made an off-hand, negative comment about Jackie Robinson, and, regardless of his views on race, found himself linked to the racism of the era.

"...Furillo later said that he had no interest in signing the petition that Dixie Walker circulated among the team to say that they did not want to play with Robinson. Having grown up in a small community where Italians were a distinct minority, Furillo knew that ethnic and racial discrimination was not confined to blacks (81)."

Despite these compelling insights, the actual game that's supposed to be the subject seems to be lost at times. Don Larsen gets the same amount of coverage as the others when he should be the primary focus. A lifelong average pitcher dealing with a failing marriage and alcoholism pitches the only perfect game in postseason history? This should be receiving the most attention, despite the excellent backstories of the players on both teams. Paper profiles Larsen in the beginning of the book, and occasionally returns to him. What brings the book down the most is the style that Paper employs at the end of each chapter, detailing every at-bat of the game.

"Jim Gilliam is more concerned with getting on base than retaliating against a knockdown pitch as he steps into the batter's box in the top of the seventh inning of the fifth game of the 1956 World Series. But Don Larsen is not making it easy for him. The Dodger second baseman takes a called strike, watches another pitch go by for a ball, and then fouls off a pitch (224-225)."

Paper is obviously trying to create what feels like a radio play-by-play, and this ends up being incredibly distracting. Personally, I've never been a fan of present-tense writing, and this is made worse by Paper injecting the perceived emotions of the particular players in the various parts of the game. While these emotional assumptions are understandable, it feels like Paper is trying to create fictionalized scenes in a book that is otherwise a strong history text. Overall, Perfect is amazingly well-researched, but is weighed down by these little problems. Had Paper focused more on Don Larsen and strictly adhered to his journalistic tendencies, this pivotal game account would have been so much better.