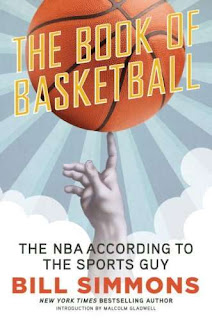 As I was reading Bill Simmons's The Book Of Basketball, I realized that writing about it would coincide, seasonally, with my previous post. My review of Lew Paper's Perfect came the day after the 2009 Major League Baseball season ended. Today, I'm looking at a book about professional basketball when the 2009-10 NBA season is less than a month old. This will surely be the last sports book that I'll read this year, and having back-to-back looks at my two favorite sports was entirely coincidental. However, with one season gone and one season underway, I couldn't help but notice this chronological symbolism.

I've spent quite a few months waiting for the publication of The Book Of Basketball, but in spite of my excitement, I realized that I wouldn't immediately call myself a "fan" of Bill Simmons. I read his Page 2 columns on ESPN.com whenever I see them linked, but they've never been an essential part of my online readings. The more I thought about it, the more I realized that I've never read a bad article by him (given my admitted sporadic patronage, I'm sure he has a few duds). My eagerness to read the book stemmed not so much from the author, but rather the subject. As I've mentioned a few times, passionate NBA fans are sometimes hard to find, since the prevailing assumption is that NCAA basketball is superior, and that the professional ranks are easier to criticize. The example I usually fall back on is writer Chuck Klosterman, a writer I deeply respect for his intelligence, humor, and love of NBA basketball. Now, I'm happy to include Bill Simmons in this category as one of my two favorite basketball writers, based on the strength of his latest book. Two weeks after publication, The Book Of Basketball already ranks as one of the best works on the sport, and the research that went into it is commendable on its own.

The title is perfect in all of its simplicity. This isn't a strict history of basketball, nor is it merely a collection of anecdotes and memories. While these are featured prominently, for all intents, this is a book of basketball in every sense, and from every angle. Simmons discusses the evolution of the professional game, analyzing everything from single games, players, drafts, and happenings. He also deftly shows how aspects of the game cannot be immediately compared throughout the eras. This refers mainly to statistics, and how averages from the 1950s and 1960s cannot be adequately compared to the stats of today's game.

"[Celtics guard Bob] Cousy got screwed historically by his first four years (the pre-shot-clock era, when nobody scored more than 75-85 points a game) and the last five years (when they started counting assists differently). Cousy averaged 8.9 assists for a '59 Celtics team that averaged 116.4 points per game; John Stockton averaged 12.4 assists for a '94 Jazz team that averaged 101.9 points per game. How am I supposed to make sense of that? How do we know Cousy wasn't averaging 15-16 assists per game if we applied the current criteria (Simmons 492-493)?"

Refreshingly, Simmons does not shy away from the racial areas of the game. He gives stunning accounts of the racism in basketball, injustices experienced by such legends as Kareem Abdul-Jabbar and Oscar Robertson. "When Oscar's Crispus Attucks High School became the first all-black champion in state history in 1955, Indianapolis rerouted its annual championship parade toward the ghetto, with the implication being, We don't trust the blacks to behave themselves, so let's keep this self-contained. Oscar never got over it. Nor did he get over Indiana University's coach, Branch McCracken, for recruting him by saying, 'I hope you're not the kind of kid who wants money to go to school' (559-560)."
According to Simmons, the rise of pro basketball correlates with the rise in black players, athletes who were able to add speed and creativity to the game even while facing prejudice on and off the court. These realizations and stories are not new; however, basketball history and racism are not as well known as baseball. Baseball players weren't the only ones who dealt with (and overcame) such injustices.

The bulk of the book is devoted to Simmons's excellent idea of the Pyramid, a combination hypothetical revision of the Basketball Hall Of Fame/detailed history and rankings of the best players of all-time. This is not the obvious list that might appear in lesser hands; Simmons has done staggering amounts of research, reading dozens of books and watching hours of seemingly forgotten game films. Even the players ranked in his Pyramid aren't exempt from harsh criticism. All of it is constructive, however. Take his look at former Indiana Pacers guard Reggie Miller, a player recognized as one of the best in the modern game:

"At no point was Reggie considered one of the NBA's top ten players for a single season. Nine of his contemporaries at shooting guard made All-NBA (first or second): Jordan, Drexler, Dumars, Latrell Sprewell, Mitch Richmond, Kobe [Bryant], T-Mac [Tracy McGrady], [Allen] Iverson, and Ray Allen. Reggie only made third-team All-NBA three times ('95, '96, and '98). That's it. And his reputation as a "great" Playoffs player has been slightly overblown. The Pacers were bounced from the first round in his first four trips to the Playoffs (344-345)."

These examples are just a fraction of the topics covered. The Book Of Basketball is the type of book that needs to be read in its entirety for one to fully appreciate its scope and research. Also, Simmons's style might not be for everyone--he's serious when he needs to be, but the statistics and analyses are kept humorous and light, and are marked with hundreds of footnotes that often deal with funny stories or far-reaching pop culture references. This is not to say that this isn't a serious work. As opposed to other sports books, however, Simmons thankfully keeps a lot of cliche and melodrama under wraps. He's a naturally funny writer and is able to mesh this comedy with basketball issues that are never trivialized, unless he does so intentionally. Perhaps I spoke too soon when I claimed that this work is already one of the best basketball books ever written. However, in time, I feel that the research and opinions will still hold up.

Good review. I'm not sure I'm interested enough in the NBA to read the whole thing, but maybe.

Just tell me this: How many pages does he spend writing about how pissed he is that Dennis Johnson isn't in the HOF? That argument drives me crazy. Simmons considers Bird to be Jesus. He thinks that McHale is nearly as good. Parish he thinks is great, too. And on and on. So I look at it this way: How hard is it to be a great point guard if you're the fourth best player on a team that has two of the 50 best players of all time on the floor? I'll have to skip that chapter.

Oh, the bile and venom over Dennis Johnson's HOF snub is written about extensively!

I was too young to see the 80s Celtics in their prime; however, Simmons at least doesn't hide his fan bias.