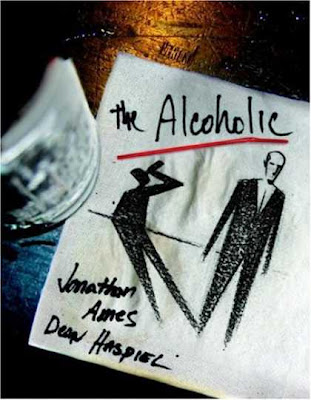 My recent reading of the graphic novel The Alcoholic was done in the interest of satisfying two slightly different goals. First, as I've mentioned here once in awhile, I'm woefully behind on readings in the graphic novel genre/format. This applies to both major works and less heralded ones. Quite a few of my friends have given me a lot of suggestions in order for me to get a few titles knocked out, and I figured that The Alcoholic would be a decent place to start. The second goal was to familiarize myself with the writings of Jonathan Ames. For someone who has been writing for as long as he has, it seems that a lot of his mainstream and everday attention has been intesified recently. Undoubtedly, this has a lot to do with "Bored To Death," the HBO series that he created. The Alcoholic has its share of brilliance in small flashes, but I do have a few criticisms with the text, ones that I'll address shortly. Normally, I wouldn't have to preface this in any way; I'd simply go about my analysis as I've always done. However, since I'm so new to the form, I had to think about my reaction to the book a little more than usual, to make sure that I wasn't missing anything or looking at the book differently merely because of a format change.

The story tells about the life and substances of a "fictional" writer, Jonathan A., and how his missteps, problems, and social woes can be tied into his alcoholism. The protagonist never hides his disease. He shares his thoughts immediately, after a blackout finds him in a very precarious situation. "I have a lot of problems. Not more than the average person, really, but I have a propensity for getting into trouble, especially when I've been drinking. This one night, I came out of a blackout and I was with this old, exceedingly tiny lady in a station wagon (Ames 6)."

The reader then goes on a dizzying journey of Jonathan's life and relationships, with three people sharing the duties as the most important in his life, for better or for worse. His childhood friend Sal attempts to make love to Jonathan in high school, leading to an unspoken attraction between the two that's marked by their friendship growing increasingly sparse and fractured over the years, with the occasional reunion that goes nowhere. After Jonathan's parents die, he grows closer to his Aunt Sadie, sharing (and hiding) his problems with her, and sharing a relationship that toes the line between genuinely touching and subconsciously incestuous. Whether sober or drunk, he carries a torch for a dead relationship with a younger woman whom he refers to by the name of the current city in which she lives after their relationship ends (San Francisco, Seattle, etc.). Jonathan not only has to deal with his alcoholism, but also with increasing forays into cocaine. Even his respect as a novelist cannot compensate for his substance abuses. It leads to him losing potential teaching jobs and acting with low social decorum.

This might seem like a simplified overview of the plot, but it's difficult to give too much away, especially when the words need to be read in conjunction with the illustrations by Dean Haspiel. Also, since this is a graphic novel, it's imporant to realize that these sketches, both logistically and formally, don't give nearly as much away as it may seem in the above paragraph. Returning to the notion that I don't want any of my critiques to be a result of my simply being a novice to the form, I'll understand if anyone reading this takes my opinions with a grain of salt. That said, I had some problems with Ames's vision of the character. The best, strongest moments in The Alcoholic come when he reveals Jonathan's deepest, most open thoughts regarding his relationships. Sal is the best example. In the early developments of the relationship, as well as Jonathan's subsequent attempts to reconnect with him, Ames's attention to emotional detail is beautiful as well as saddening. There's a definite love between the two, and whether or not they're both gay (Sal definitely is) is besides the point. It's a love, platonic or otherwise, that's nearly tragic in its depiction. Combined with Haspiel's gift of facial nuances (see the image below for a semi-decent example), the full, combined effect truly hits the intended chords. Nothing is embellished on the page.

What hurts the text the most is the constant winking between the author and the reader. Ames names his character 'Jonathan A.," and as Neil Gaman is quoted in his blurb in the book, "I don't know how much Jonathan A. is Jonathan Ames. I'm not sure I want to." Yes, there are two equal hypotheses at play. Perhaps Ames is giving a genuine autobiographical sketch, or maybe he wants the reader to merely think as much. There's also the excellent chance that he's turning the dynamic of "don't confuse the author with the protagonist" on its head. This literary style has the potential to be a great branch in postmodernism. However, I found it more distracting than anything else. The book also sets up what could have been more in-depth plotlines (a shady drug dealer named Art, and the aftermath of September 11th), but these are immediately dropped for other developments. Perhaps more expansion would have taken away from the immediacy of the main plotline, but the effect is jarring. 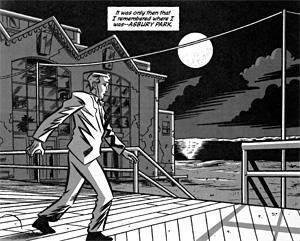 However, I highly enjoyed my introduction to the art of Dean Haspiel. His drawings are heavy on small details, especially the aforementioned facial expressions. The pictures are an almost flawless blend of noir atmospheres and shadings with almost cartoon-like evocations of the major actions. This is all done in the most serious way, allowing him to capture both the drama of the actions as well as the absurdity of some of Jonathan's more shocking escapades. I know that I have a lot of ground to cover in this genre, and hopefully in due time I'll have some more works to write about as I increase my knowledge of the graphic novel medium. The Alcoholic is not completely lacking in worth, not in the slighest bit. I'm also curious to see how Ames's writings work in longer formats. I'm sure others would be able to suggest better introductions, but this slim volume at least has the foundation for what I'm sure to discover in the future.