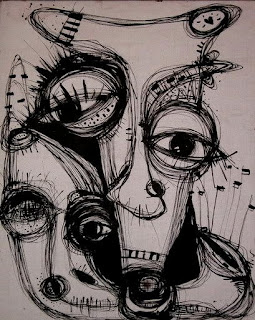 (SPOILERS)
Anyone familiar with Facebook has surely come across online campaigns by Facebook users, demanding the addition of a "dislike" button to go along with the "like" feature. Supposedly, this is done a.) to show disapproval for bad news and to make sure that other Facebook users understand that news such as a broken leg or a crashed computer is nothing to be liked, and b.) because some people waste too much time on said website (I'll cast the first stone at myself). Perhaps it's saddening that such a widespread social media diversion was the first thing that popped into my head upon reading about Blank Line Collective's latest installment, "Likes/Dislikes." One final word about Facebook before I get into the more relevant thoughts: at best, the website can foster quick, yet inventive collaborations, with long-running commentaries and notes sometimes leading to a wonderful exchange of ideas. "Likes/Dislikes" is the epitome of collaborative creation, from its theatrical interpretation to its happenstance origins.

Amanda Lucas and Erica Barnes (the actresses in "Likes/Dislikes") found themselves looking through the zine collections housed by Chicago Underground Library, and stumbled upon a zine called "Likes/Dislikes" by Lacey Prpić Hedtke, an artist/writer based in Minnesota. The subject is a massive collection of simple statements, all beginning with either "she likes" or "she dislikes." There are hundreds of such phrases in the zine, and it's refreshing to find that, after a recent Google search, none of Hedtke's zine work is immediately available, given the creative intent of zines, normally available for modest payments or creative exchanges. Chicago Underground Library (an organization that I'm still planning on being involved with, even though I wrote that several months ago) rarely, if ever, turns down any submissions to their ever-growing database, thus explaining how a tiny, self-created work was in their possession in the first place. Blank Line decided to adapt the work into their latest piece, and the result is a quick, almost avant-garde performance, and a small link in a much larger piece. 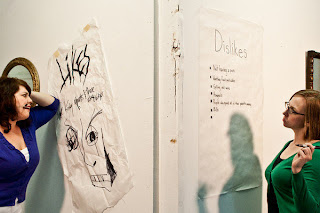 The audience is led into the performance space by The Expert (Stephanie Brown), and immediately thrust into a white space completely covered with ink, pastel marks, mirrors, and paintings, with Lucas and Barnes writing, shouting, and sharing various ideas in the vein of "likes/dislikes." There is no seating, and the audience has complete control of where they view the performance, if at all; there's nothing stopping anyone from exploring the art on the walls and just listening to the ideas being exchanged in the background. Furthering the idea of links and collaborations, the audience is part of the creation, functioning as a sort of background to the ongoing movements. The "likes/dislikes" are often hilariously funny, but tinted with some sadness, despondency, anger, and subtle hopes that the various declarations won't be met with jeers or disbelief. Lucas and Barnes work their physical and emotive energies quickly, their "characters" (possible metaphors for the right and left sides of the brain) rarely stopping for any reflection or insinuations to sink in; ideas are tossed about, sometimes with some breathing room, but more often than not written down and discarded for the next round of ideas. The performance was very evocative of the Blank Line production of Eugene Ionesco's The New Tenant, heavy on the action and letting the implications stand on their own.

The beauty of the audience interaction continued on Saturday with a group discussion of the meanings behind "Likes/Dislikes." Questions, complaints and discussions were welcome, and to me, was still a part of the original performance. Every aspect of "Likes/Dislikes" is based on shared creativity, and the decision by Lucas, Barnes, and Brown to open up the floor to the audience was a wonderful combination of shared artistic intent and personal meanings garnered by the people in attendance. Zines are meant to be shared, Chicago Underground Library is meant to be a physical and mental colloquium, and "Likes/Dislikes" is merely an extension of those missions. The performance may lead to some initial confusion and questions, but in reality, that's the whole point.