A Play On Words 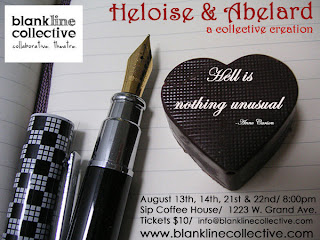 "What if you could write a letter to that one person? What would you write? What if you had to re-live the entirety of that relationship from start to finish as you write? Would this be the letter where you finally get to say everything you ever needed to say?"

While killing time before Saturday night's performance of Heloise & Abelard, I had one of those moments that are equal parts serendipitous and just plain creepy. Reading Don DeLillo's novel Underworld, I stumbled across this particular passage about ten minutes before showtime, and I had to re-read it a few times:

"She stood on the roof of a factory building, a space made available for the evening so that a small theater group might launch a fund drive, and fifty people drank tepid wine out of plastic cups and said, We need theater."

Yes, there's potential to read way too much into this chance paragraph, so I'll keep it to a grateful minimum. Heloise & Abelard is being staged at Sip Coffee (1223 W. Grand), not on a rooftop, and while the audience sipped coffees instead of wines, the inherent message, namely in the final three words, is the same, no matter which direction it is taken. Chicago, even with its thriving theater companies both large and small, needs theater. Local ensemble members will tell you the same thing, for a myriad of creative and communal reasons.

The play is loosely based on the emotions and ideas behind the love letters between titular 12th century couple, a doomed love long before the fictional Romeo and Juliet, and a lot less hammered into popular consciousness. The performance revolves around the notion of having to remember, summarize, heal, and comes to terms with a failed relationship, and to do so via letter-writing. In this play, this comes down to one final letter, and the drastic range of emotions that swell once a love affair comes to an end. It opens with Heloise (Amanda Lucas) storming into her apartment, pulling a letter out of an envelope. The letter is crumpled, and as she reads it, her energy is both sapped and invigorated, all while her emotions visibly rise. Initially, there is little doubt that the letter is from the unseen Abelard, and she goes about writing her own response. In this process, there are hints to not only the sympathy for a woman scorned, but also traces of mental instability and obsessive-compulsive behaviors. She gets her typewriter set up, sits down, and says "Dear Abelard." A voiceover, both echoing and haunting, repeats this phrase. She types some more, gets up and paces nervously, and goes about some odd routines.

She replaces a wine glass on her table with one that looks identical. A hand towel is replaced with another one next to an ewer and wash basin. As she looks over what she has written thus far, she smiles coyly and becomes enraged, often within the span of a few seconds. The voiceover gives more hints to what is written on the page, and as this scene progresses, it grows into a long monologue detailing their relationship. It alternates slyly between imagined scenes of genuine love and connection, but laced with anger, not only with the apparent break-up, but also with the everyday "chores" and assumptions that go into any relationship. As the voiceover continues, it leads to the performance's most powerful scene, as Heloise delicately peels a mango, and ends up devouring it, tearing it apart, and becoming awash in the juices with equal parts anger and unbridled lust.

Some may be reading this with a hint of skepticism, assuming that a "modern interpretation" of a piece of history has been done a million and one times. However, Heloise and Abelard, is much more than that; it depicts reality and emotional distress that everyone has at least felt internally, even if they haven't "acted out" (no pun intended) Heloise's particular actions. The production design is fairly minimal, given the performance space and the forty-five minute run time. However, despite this minimalism, not a single piece is unnecessary. Heloise uses her typewriter, but also a Mac laptop. A few feet away from the wash basin is a CD player (which is used for a very effective few moments, playing a few strains of Neko Case's "Outro With Bees").

Carrying a one-act play, Amanda Lucas does a phenomenal job with next to no dialogue, committing her range to pure facial expressions and physical actions. Her scenes could have easily been over-acted or played for unintentional laughs in the wrong hands, given the fact that it's a performance piece in a virtually literal definition. At her most volatile and broken, she never gives too much, and at times makes her performance very unsettling, as if the audience is spying on some very private actions that shouldn't be viewed by anyone else.

Heloise & Abelard takes an interesting turn in its final climax, leaving the audience with quite a few unanswered questions, but in the best ways possible. This is the point of the play, to inspire discussions and personal interpretations, none of which can be outlandish in the proper context. In addition to being genuinely moved and thoughtful afterwards, I did some research into the lives of the actual Heloise and Abelard in order to put some of the scenes into context. If a performance can inspire deep thought, intentional discomfort and education, then there's no doubt as to its success.