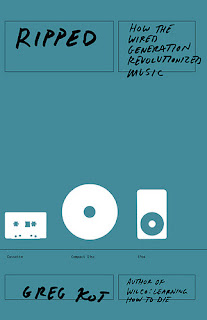 Last week, I read Greg Kot's Ripped during some pretty appropriate times. In between chapters, I used some free time to e-mail song files to a friend of mine for the Aught Music blog. In addition to this, I burned a handful of CDs for a co-worker as part of a music exchange. Today, these actions can be done with minimal thought, with most of the concentration being put into which songs to select. However, the more I thought about it, the more I realized that sharing music files and making my own CDs would have seemed almost incomprehensible ten years ago. To say that technology has changed music in the past decade (both conceptually and from a distribution standpoint) is akin to declaring that "the sky is blue" or "Tuesday tends to follow Monday on the calendar." While the remarks are true, there's much more detail and explanation below the surface. In his book, Kot gives a detailed, expansive history of the relationship between music and technological advances in the past decade. Again, said relationship may already seem well-known and documented, but like knowing that the sky is blue, we still need to refer to earth science texts from time to time.

Kot devotes ample discussion to the software developments (Napster, iTunes, etc.) and lawsuits filed by the major record labels. When one thinks of music and technology, these are probably (and rightfully so) the first ideas that might come to mind. However, there's much more to explain. Many of the monopolistic labels and corporations merely assumed that the money would continually come in via physical CD sales and concert revenues. This might seem obvious, but no matter how important the creative process is to music, the bottom line is always a deciding factor.

"With consolidation came pressure to produce profit. The multinationals were effectively run by their shareholders, who wanted a steady flow of quarterly returns to justify their investment. But in an industry supposedly devoted to creating a highly volatile and unpredictable product--music--this was hardly a sound strategy. How to reconcile the whims of creativity with the need for producing profit on a prescribed schedule (Kot 7)?"

The ability to download music for free led (and still leads) to two aspects, one of which is undoubtedly healthy, while the other one is still in a gray area. Kot supplies some anonymous quotes from music downloaders, and their opinions tend to fall into a creative category or a financial one. With a good portion of radio stations only playing mainstream hits, the Internet exposed people to independent and underground music that otherwise may have remained elusive. However, some browsers just didn't want to pay, especially with the rising costs of CDs, even with production costs being lowered. It's a classic example of taking the (potentially) bad (people 'stealing' music) with the good (people discovering new artists). Yet at the same time, there's potential for listeners to actually increase their music purchases when it's available for free.

"Within a week, I'll get four to five albums from friends like that. If I like the band, most of the time it leads to going to a concert. I will buy later CDs from the band or I'll buy previous CDs..."--Adam, college student in Seattle, born 1988 (68)."

These sections of the book are heavy on morals, pros, and cons, but the best sections are the ones I wasn't expecting when I picked it up. Kot details quite a few bands and their debt to the Internet. Some acts have become huge, and it all started with downloads and small yet feverish fan bases doing their part to help. Examples range from well-known (by today's standards) bands like Death Cab For Cutie:

"And in many ways a typical [year] for a struggling independent band with no major-label budget from which to siphon. On tour, the band was making $50 a night, barely enough to cover fuel expenses to get to the next town. Paying for a hotel was out of the question, so they'd shack up with fans, sleeping on floors and couches. That's when it became apparent that something else was going on, something they couldn't control but that was benefiting them in ways they couldn't quite yet fully grasp (73-74)."

...to lesser known musicians who use the Internet and developments to the best of their abilities, such as Dan Deacon:

"'If my album didn't leak [on the Internet] as far in advance as it did, not as many people would have heard it and the shows I did over the summer wouldn't have been as well attended. All these markets that the music industry has ignored are now being exploited by people you would not think of as pop stars (174).'"

Kot closes the book on the expected note, with the rise of bands (namely Radiohead) offering their work for free or for suggested donations. The beauty of his writing is that it's pure journalism. The actions of record labels and file sharers leave themselves open for a myriad of opinions, both postive and negative. Kot doesn't judge one way or another (even though it's obvious that he sides with the listeners), but rather presents the history of the Internet's mark on the music industry. As evidenced in his last book on Wilco (Learning How To Die), he's skilled at documenting individual bands both historically and emotionally, which can be difficult at times given the intangible qualities of the art form. Ripped is a very quick read, but there's no doubt that Kot knows his subject. He can write about artists as different as Bright Eyes and Nine Inch Nails, and his tone never changes, only the necessary details. I've only hinted at a few of the subjects and topics of the book. There will undoubtedly be more concise looks at the varying ideas, but Kot hits his marks, presenting a varied history with detail, but moving at a brisk pace without sacrificing style or major points.