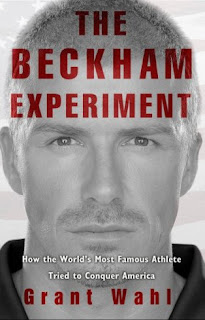 Earlier this year, I felt out of place among a few of my co-workers, in that I wasn't excited about the inaugural season of the Seattle Sounders FC. It's not that I was opposed to it, but when one of my co-workers excitedly announced that she had season tickets, I could do nothing but smile and nod in genuine happiness for her exuberance, but that was the extent. She had played soccer in college and now played on a weekly rec team, so her association with the game was well-founded. Another friend, it turned out, had a brother who covered soccer for Sports Illustrated. I did my best to give it a shot: I read about the Sounders' signings and roster developments in the newspaper and online. Once the season started, I read the game recaps. However, soccer still fell into the category of sports that I simply cannot get into, a category that also includes golf, lacrosse, auto-racing, or X Games-style sports. However, being both American and a non-fan of soccer always seems to carry a sociological and cultural stigma. Simply put, it's difficult to express honest indifference without coming across like a typical "Ugly American."

Merely because of working with his brother, I began to read Grant Wahl's soccer coverage in SI, and recently read what very well could be the most anticipated book on soccer in America, The Beckham Experiment. It chronicles the very up-and-down relationship between David Beckham and the Los Angeles Galaxy of Major League Soccer. I went into the book determined to remain objective, especially since I tend to come away disappointed by sports biographies, even ones concerning my favorite sports, baseball and basketball. If a given book chronicles a specific player, the formula tends to be consistent: it's a look at their accomplishments, but layered with the usual exposes and dirty laundry that are no longer, in our culture, the shocks that publishers and writers want them to be. However, Wahl does some very impressive balancing acts. This is not a tell-all; this is a genuine, journalistic look at the personalities of a successful (yet struggling) sports franchise seemingly "blessed" with one of the greatest soccer stars to ever play the game.

Realizing that the book would appeal to knowledgeable soccer fans as well as people who merely appreciate the sex symbol and Us Weekly side of Beckham, Wahl gives enough information on the rules, regulations, and dizzying corporate facets of an MLS team to educate (let's just say it) people like me, but not so much as to bore the true aficionados. The true focus of the book is on the benefits and problems of Beckham the footballer, not Beckham the international, cultural enigma. However, because Beckham is so famous and so recognized by people who do not follow international soccer, at times it can be next to impossible to discuss his athletic side without at least nodding to his celebrity side. If Beckham wasn't the icon that he is, it's very unlikely that he would have come to Major League Soccer in the first place, at least not with the goals that he, his handlers, and the Galaxy executives had in mind. The initial hope was that his appeal would translate into MLS becoming as popular and lucrative as the NBA or NFL. Despite this hope, the task proved very lofty, even before Beckham set foot on an MLS field.

"Yet the task facing Beckham--to make soccer matter on a regular basis in the U.S.--would be enormous. The greatest player of all time, Pele, couldn't turn soccer into the daily religion that it is nearly everywhere else in the world when he played with the New York Cosmos in the late 1970s. (His league, the NASL, folded a few years after he retired). Nor did the U.S.' hosting of the 1994 World Cup. Since its inception in 1996, Major League Soccer had gained stability and produced competent young players, but it was still losing money and had yet to advance beyond niche status (Wahl 3)."

Whether it's because MLS is still a relatively small league (in stature and finances), or because Wahl had complete insider access to virtually every member of the Galaxy organization, we're treated to some very dynamic personalities, including Tim Lieweke, the CEO of the company that owns the Galaxy, and Simon Fuller, Beckham's manager. It's almost perversely fitting that major executives in sports franchises or athletic managers, no matter which league, always seem to be outlandish personalities, equal parts George Steinbrenner, Al Davis, and Bill Veeck.

However, despite the dozens of people involved in The Beckham Experiment, the most compelling figure in the book is not the man himself, but rather teammate Landon Donovan. Having already established himself as one of America's greatest soccer players, not to mention the leader of the Galaxy, almost from the beginning, he was "asked" to immediately play Scottie Pippen to Beckham's Michael Jordan, with one major difference:

"Let him [Beckham] be the captain. You [Donovan] be the star. [Galaxy President Alexi] Lala's challenge to Donovan was sincere, even if Lalas neglected to mention that the impetus for the captain switch was coming from Beckham's own handlers. But what if Donovan did become the star? What if he--and not Beckham--ended up being the Galaxy's best player? One of the cardinal rules of professional sports is this: Never bring in a new player on a higher salary than your best player if the new guy isn't better himself. It's a recipe for resentment in the locker room. And while Donovan made sure to acknowledge Beckham's lengthy credentials and the special circumstances of American soccer--Beckham could fill stadiums and sell 250,000 jersey; Donovan couldn't--there was no guarantee that Beckham would be the Galaxy's best player (80-81)."

Moments like these define the book. Yes, it's about Beckham's attempt to bring recognition to a sport that doesn't always register with American consciousness. However, the actions and opinions of the people around Beckham--especially his teammates--register strongly, especially given the candid nature of some of Wahl's quotes. In baseball, for example, if a teammate were to call out another teammate publically, the media coverage would be intense. However, since MLS still hasn't attained the status that its members would prefer, public frustrations are vented, and the results are surprisingly...normal. Sports are not always the dramatic, metaphor-laden diversions that they're made out to be. Teams are composed just like any other workforce. Personalities dominate, not everyone gets along, and some people receive preferential treatment, much to the chagrin of fellow employees. Wahl's profiles of players such as Donovan and Alan Gordon are much more compelling at times than David Beckham. MLS players often play for stunningly low annual salaries, and their day-to-day financial struggles and devotion to something (the game of soccer) speak much more clearly than the actions of an international icon.

I still don't consider myself a soccer fan, but Wahl's account of the Los Angeles Galaxy is a piece of excellent reporting. I'm already looking forward to the paperback edition, considering Beckham's angry reception by L.A. fans after his return from the Italian Club A.C. Milan. I'm sure a lot of American sports fans consider soccer "boring," but the management and the day-to-day actions of the MLS teams are just as compelling as the major leagues of baseball, basketball, and American football.