As I've mentioned quite a few times in various posts, I worked for the Chicago Flame newspaper (the student newspaper of the University of Illinois at Chicago) from 2002-2005, beginning as a writer for "The Inferno," the paper's entertainment supplement, before rounding out my tenure as the entertainment editor. Recently, the Flame's website has been retooled, and my old archives have been difficult to find. I've decided to save my physical copies of the old issues, and as I continue my ongoing job search, I'm hoping to scan the papers into a portfolio, but I also feel that it would be a good idea to archive them on this blog.

Throughout the summer, I'll be sharing my old pieces, but I must issue this caveat: with the very rare exception, these are not thrilling writing examples. I wrote for the paper between the ages of nineteen and twenty-two, a young age period that saw me struggling with my creative voice, and simply not having enough experience, media exposure, and points of reference to begin a journalism career (I still cringe when I read the end of this article, in which I gush that author Chuck Palahniuk is one of America's greatest novelists). I'll do my best to check my self-deprecation at the door. For my first archival piece, I present my interview with Palahniuk, conducted in August of 2002 at the Swissotel in downtown Chicago. As I've also mentioned in previous writings about Palahniuk, my literary tastes have changed in the last nine years, but he was one of the most polite, gracious interviewees one could ever hope to encounter.

Chuck Palahniuk: Up Close and Not Too Personal (originally published in the Chicago Flame, August 27, 2002) 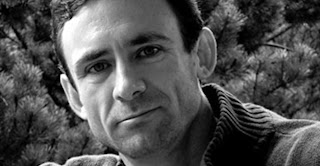 Here's a word of advice. Try not to get too sappy with Chuck Palahniuk, because he will get sick of it mighty quickly. Palahniuk believes that today's literature and fiction contains too much emphasis on sentimentality, relationships, and overall predictable niceness.

This is where he comes in, being a writer famous for presenting characters and situations that are anything but wholesome. In the remaining months before the release of Lullaby, his highly awaited fifth novel, Palahniuk sounds off on several topics, including today's fiction.

"I'm sick of it," he says, commenting on the prevalent themes of today's literature. "It's all about family and looking for Mr. Right. There's way too much sweetness and reflection. Also, people define peer groups as family, and [literature] is blatantly about relationships."

Palahniuk feels strong dissatisfaction with actual topics as well as themes. "There's so much focus on parental issues and teen rebellion, also on memoirs. You have teenagers writing memoirs now. It's more about resolving the past than on looking at the future."

With that in mind, the premise of Lullaby is attributable to Palahniuk's knack of writing with graphic themes and mentalities. "It's sort of an evil Harry Potter. We all have fantasies of power and control, and this novel shows what could happen if we really had these powers, possibilities of our dark sides." He keeps comments on Lullaby to a bare minimum, relying instead on the publicity department of Doubleday Publishing to do that job. Instead, he is much more open to discussions on his previously published works.

Undoubtedly, his most famous novel is 1996's Fight Club, fueled by the movie version in 1999 starring Brad Pitt and Edward Norton. Despite the fame, he expresses frustration with the ongoing mystique of the book and the film. To Palahniuk, Fight Club is an example of a silver cloud with a dark lining. "I should have quit writing and stayed as a mechanic," he says, referring to his previous job. "I had a good job as a mechanic, but had to quit because people were constantly calling me about Fight Club. I took my boss out to lunch so I could tell him I was quitting. He put his hands over his ears and said he didn't want to hear it."

Palahniuk also feels a stigma with his constantly being referred to as 'the author of Fight Club.' "It's going to say that on my tombstone," he says with a laugh. "Yes, I want to get beyond the point where Fight Club does not need to be mentioned."

Even today, fans and critics believe he harbors an underground secret. "At book signings, people will come up to me and ask 'So where's the fight club meeting afterwards?' I tell them that there is no fight club, and they'll say 'Oh, I know you're not supposed to talk about it.' Then they get pissed because I don't tell them. Also, newspapers want to send reporters to do exposes on fight clubs. They call me and ask where the fight club in Sarasota, Florida is located. I'm like 'Dude, I don't even know where Sarasota is.' Then they get pissed and hang up."

With Fight Club and Choke, the New York Times bestseller, Palahniuk expresses a fascination with support groups. "I like the dynamic of twelve-step and support groups, because they replace modern religion. You used to go to church, confess, and have all of your sins absolved. Now that happens with support groups."

Choke tells the story of Victor Mancini, a man swept up in a parallel world of sin and highly debatable goodness. Victor is intended to be a representation of a modern day Jesus Christ. "I wanted Victor Mancini to have a tendency to be Jesus for other people," says Palahniuk. "People have a desire to be divine for others." Palahniuk also downplays statements by fans and critics that he is a sort of messenger and critic of society's problems, despite evidence to the contrary in his works. "I don't think that society is going downhill anymore than it has been," he says.

The novel Invisible Monsters is probably the most daring novel he has written, and also the least-praised one at that. It tells the tale of a mutilated fashion model, her friend and cohort (a sex-changed bombshell, Brandy Alexander) as well as their encounters with colorful supporting characters. Subtle criticisms on the world of fashion are weaved into the plot. "I find all these attributes to a piece of fabric [silly]," says Palahniuk. Instead, the main intention of Invisible Monsters is a complete attack on gender roles and norms. Palahniuk has strong, almost controversial opinions on the characteristics of men and women in our society.

"Women watch Lifetime for information on relationships, and men watch The History Channel so they feel as if new information on actions has been taken away." Chuck Palahniuk is not a chauvinist. He is not a radical prophet for 21st century America. Above all, he is a writer, one with simple beliefs on writing that make for the gripping results. The main tool for Palahniuk is the heavy use of non-fictional elements in the fictional settings.

"I love the process of writing," he explains. On the use of non-fiction, he comments "It makes the realistic seem real in an unrealistic situation."

For someone who believes that his skills as a mechanic were more important than the writing talents, Chuck Palahniuk has had tremendous success with the latter. He is unfazed by worldwide recognition, a cult following of fans, and a major motion picture based on his very first novel. Palahniuk is a modest craftsman of words, quietly and calming continuing his establishment as one of America's greatest novelists.
at June 01, 2011