"Everything Must Go (To Extremes)" 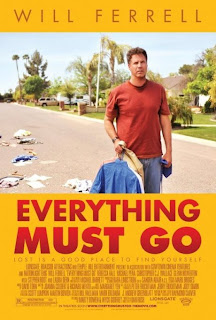 There is no shortage of potential, literal ways to define what the film Everything Must Go is "about." Going with the depicted events, good cases can be made for the theme being a.) the effects of alcoholism, b.) the crumbling of a marriage, or c.) the growth and study of interpersonal relationships. However, much like a good short story (the film is loosely based on Raymond Carver's "Why Don't You Dance?", a selection from What We Talk About When We Talk About Love), the events provide the journey and the hints of the resolution, but the development ultimately refuses to make any concrete assumptions or tidy explanations. This is not a perfect film, yet it wisely goes about showing the actions while at the same time resisting any moralizing or cheap surprises.

In the span of one day, Nick Halsey (Will Ferrell) loses his job in the midst of relapsing into drinking. Upon returning home, he finds every lock on the house changed, a "Dear John" letter from his wife taped to the front door, and all of his possessions scattered on the front lawn. His credit cards and joint bank account are frozen. His immediate solution to all of this is to head to the store to buy some beer, which, his alcoholism aside, isn't so bad, seeing that having all of those happenings piled into span of a few hours would be too much for anybody to process. He encounters a young boy named Kenny who aimlessly rides his bicycle around the street, passing time while his mother cares for a terminally ill woman down the street. A run-in with the police is avoided when Nick calls upon local detective Frank Garcia (an excellent performance by Michael Peña), who happens to be his AA sponsor. Garcia's solution is to have Nick sell his personal items in a yard sale, as a way to clean up the mess and begin sorting his life out. Nick enlists the help of Kenny, and in the process begins conversations with Samantha (Rebecca Hall), a young pregnant wife waiting for her husband to join her in their new house. These secondary characters (including an old high school classmate played by Laura Dern, and a comedic May-December couple next door) provide interactions and realizations for Nick, not in the expected roles of helping him "find himself," but more in the sense of helping him understand his problems and weaknesses. There is a major difference.

Dan Rush is a first-time film director, as well as the writer of the screenplay. His direction is admirable and not overly flashy, focusing on excellent close-up shots of the character's faces, which, aided immensely by the commendable acting, carefully shows the inner problems that plague every character: Nick's nighttime sweating in the depths of withdrawal; Rebecca's unhappiness and unease in her domestic life, which she tries her best to hide; Kenny's isolation from kids his own age. Everything Must Go was shot and set in Arizona, and Rush includes some occasionally grand wide shots of the region's long roads and rural terrain, which somehow blend nicely into the smaller scenes of everyday suburbia. With the occasional exception, there are no dramatic revelations in the film. Therefore, Rush wisely keeps the direction to the minimum, allowing the story to be told without resorting to trick shots or mixed-up story lines.

The screenplay is a source of both the film's strength and its major weaknesses. Adapting a very brief Raymond Carver story is an excellent example of a new filmmaker tapping into a reservoir of terrific material (and I'll now confess that I haven't seen Robert Altman's Shortcuts). I'm still amazed at the wealth of classic short stories and novels that still have not been adapted into films, but that is a different tangent altogether. Carver's stories, including "Why Don't You Dance?", are more often than not minimalist, open-ended expressions that one wouldn't immediately assume could transfer well to film. Rush is able to express Carver's hallmarks--male isolation, alcoholism, and suburban dissatisfaction--while at the same time leaving virtually none of the events or pieces of the story in the film, with the exception of the idea of an impromptu yard sale and the appearance of a record player and vinyls. In the story, the man is left unnamed, and only interacts with a young couple who stumble upon his possessions on the lawn (they play some records, which leads to the story's title question). At the same time, while Rush skillfully evokes Carver's atmospheres, the screenplay has some nagging problems. The piling of a broken marriage, a man falling off the wagon, and the loss of a job all in the span of a single day might not be totally impossible in real life, but seems to be an exaggerated, hasty introduction to Nick's current state. Everything Must Go is a tidy hour-and-a-half film, but would have been better served with some of Nick's woes drawn out more realistically. Later in the film, the audience is shown two concurrent scenes that are blatantly confusing. In one late night scene, Nick is sweating and trembling from alcohol withdrawal, leading to a revealing confrontation with Samantha. The very next night, he's shown looking strong and avoiding another relapse while out to dinner. The inclusion of a brief scene with Delilah (Laura Dern) is well-crafted and marked by terrific acting, but somehow feels out of place, or, more appropriately, tossed in. It avoids some obvious film cliches, yet its very subversion of expectations leads to its being a strange aside in a generally smooth time line. One of Rush's best decisions was to leave Nick's estranged wife out of the picture, literally: she's discussed and hinted at, and plays a major role in one of the film's later conflicts, yet works amazingly well as an unseen character, with her problems with Nick shown in retrospect, rather than in concrete scenes. 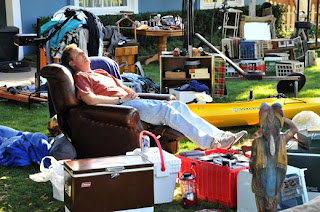 Even with these faults, the acting is nearly pitch-perfect, beginning with the wonderful performance by Will Ferrell. In his review of the film, Roger Ebert gives mentions and examples of comedians who have made the turn into respected dramatic acting. The beauty of Ferrell's performance is its understatement, since Nick's mental state would be perfect for over-acting. Ferrell is somber without being melodramatic, and even expresses Nick's withdrawal impressively, opting for a simple, saddening descent, and using his eyes to convey weariness and depression. There are occasional humorous moments in the film, but these are situational, rather than slapstick. In Stranger Than Fiction, Ferrell combined some excellent acting with scenes that called for his gifted, physical/facial comedy. In this film, however, it's a complete dramatic role, and the ultimate compliment is that audiences can easily get lost in the acting and story, rather than referring to a subliminal understanding that Ferrell is a comedian playing a serious role. Rebecca Hall makes the most of a poorly sketched character, and much like Ferrell, she evokes a lot without resorting to too much emotion, with the exception of one scene. However, much like her role in Ben Affleck's The Town, she's playing a strong woman with recurring troubles, and in both films, she doesn't have the fortune of a screenplay that gives her a chance to realistically overcome her character's problems. Again, this could be another tangent for another essay, namely the often-discussed lack of realistic female roles in contemporary cinema. Then again, she doesn't falter; it's only the screenplay that gives the character the limitations, not the actress herself. Christopher Jordan Wallace's portrayal is sympathetic, and works as a good example of adolescent loneliness and turmoil. He's basically an innocent version of Nick, without the alcohol or the life experience, striving to understand where he belongs. While Nick grows towards acceptance of his changes, Kenny's redemption comes in more confidence. Rush writes the character well, avoiding teenage stereotypes.

With bad acting, Everything Must Go would have been a bland, tiresome indie drama. However, drawing on the actors' strengths, Dan Rush was able to create a vivid film that wasn't weighed down with the occasional limitations of the screenplay. As a feature film debut, it's the sign of a potential budding talent, especially since using Raymond Carver as a basis shows bravery and determination in a first-time adaptation. I'm curious to see if Rush ever develops any original screenplays. Even if he continues to work with adaptations, some stronger drafts will help immensely, and it's not at all inconceivable that he could eventually create even better films. As a start, he aims high and generally hits his targeted goals. With more focus, he could become a highly respected filmmaker, and audiences could eventually look back upon Everything Must Go as an early, noble step in his development.
at June 10, 2011