"As She Climbed Across the Table:" Science Dictions 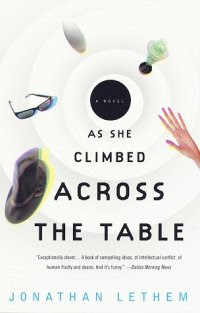 Jonathan Lethem's forays into literary-cum-genre fiction are admirable not only as hints of his eclectic tastes, but as proof that good writing can elevate any plot setting or supposedly "lesser" style (science fiction, mystery, and the like). Gun, With Occasional Music was his debut, and its combination of a futuristic society overrun with anthropomorphic animals and an old-school detective novel worked amazingly well; the two different genres were meant to assimilate, and they did, without being distracting and without taking away from the novel's serious tone and mystery. The Fortress Of Solitude elevated the beaten-horse style of "coming of age fiction", added a dash of mysticism, and still did not feel contrived or unnecessarily outlandish. A better way of saying this: Lethem takes the obvious and makes it unique. Even without being strictly genre-based, the uniqueness of his 1997 novel As She Climbed Across the Table follows the aforementioned patterns. It's science fiction, but in a strictly literal sense: it's fiction, there's a heavy dose science, and the plot revolves around the potential of other worlds. However, these do not add up to an expected result.

At a California university, professors/lovers Philip Engstrand and Alice Coombs are at an impasse. Their relationship is unstable, and takes a serious blow when Alice and her fellow particle physicists create "Lack," a black hole situated in the physics lab. Philip's attempts to win her back are fraught with problems, none greater than the realization (and admission) that Alice has fallen in love with Lack, both as a potential scientific breakthrough and as an organism that, even without having physical qualities, seems to have a defined taste in what it allows to be absorbed. It "eats" various things such as a cat (which leads to a wonderful spoof of a typical campus protest), but repels things such as aluminum foil and a batter's helmet. As Alice falls deeper in love and deeper in delusion, a cast of secondary characters provide the links between the estranged couple. Evan and Garth, two blind men recruited by Alice for their potential ways of "seeing" various particles, eventually move into the apartment at Alice's request; Professor Soft, Alice's mentor, understands her problems and attempts to recruit Philip's help; a team of Italian physicists, led by Braxia, visit the campus to study Lack; and a woman named Cynthia Jalter serves as a potential new love interest for the spurned Philip.

At its heart, As She Climbed Across the Table is a love story. With the surrounding elements stripped away, the interactions between Philip and Alice are saddening, especially since Lethem does an excellent job of evoking the fact that their relationship used to be healthy. They both know it's going downhill, fast, and the dialogue reflects crumbling unions without resorting to cliche or climatic confrontations. They speak honestly, and at times, it's easy for the reader to lose track of the absurdity of the situation, that Alice is falling for nothingness as opposed to a physical lover.

"Don't address me, I wanted to say. Philip isn't here. This is Omnipotent Voice you're speaking with.
'You're in love with someone else,' I heard myself say.
'Yes.'
A change came over me, a phase transition. A flush rose through my chest and neck.
'You're in love with Lack,' I said.
'Yes.'
Should I have known sooner?
Love is self-deception, remember. And my competition was so improbable.
But now that it was named, Alice's Lack-love seemed obvious, a foregone conclusion. Probably the whole campus buzzed with it, and I was the last to know (Lethem 75)."

Some of the novel's most vibrant passages are the recreations and careful satires of academia and college life. In one chapter opening, Lethem summarizes the passage of time on a university campus, and it manages to be comical and true at the same time.

"Days passed. Classes were taught, seminars held. Papers were handed in, graded, and returned. The team won something, and the trees filled with garlands of toilet paper. It rained, and the toilet paper dripped to the pathways, and into the wiper blades of parked cars. A group of students seized the Frank J. Bellhope Memorial Aquarium to protest the treatment of Roberta, the manatee savant. The protest was a failure. I called a symposium on the history of studen seizure of campus buildings. The symposium was a success. In the larger world, the team invaded something, some hapless island or isthmus. A letter of protest by the faculty was drafted, revised, and scrapped. Bins of swollen pumpkins appeared in the produce sections of Fastway and Look 'n' Like (Lethem 25)."


In addition to providing the major rift between Philip and Alice, Lack's presence also offers a lot of scientific and philosophical hypotheses. It's decried as inhumane for enveloping the cat, but it's also a source of potential as a scientific breakthrough. What is the meaning behind its tastes? Does it lead to another world or dimension? The far-fetched nature of having a black hole situated across a table in a science lab is rendered realistically. The existence of Lack isn't meant to be critiqued or viewed through a lens of literal science fiction. Even the most educated physics professors are baffled by its actions. However, Alice isn't the only person mystically drawn to its power. Its seduction is both scientific and paranormal, a specific metaphor for the wildly unspecific mysteries of life.

" I went back to my seat, heart pounding. Lack would take Alice, he said. The worst possible news. At the same time, I was flattered by Lack's cooperation. I had a scoop. Lack was a Ouija board, and I was the medium. I felt possessive. This was the first time Lack had aimed his seductiveness at me directly. I understood Soft, and Braxia, and De Tooth, and even Alice, a little better.
I couldn't understand this enemy. The temptation I felt was proof of his power (Lethem 154-155)." 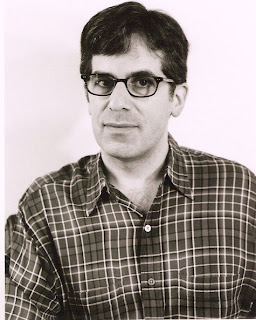 I haven't done a complete reading of Lethem's bibliography, but As She Climbed Across the Table is the second novel of his that I've read from the 1990s. Unlike Gun, With Occasional Music, this work is both assured as well as an example of a new author venturing out with some trepidation. The chapters are short, 2-3 page increments, and the work as a whole is a very quick, easy read. This isn't to say that Lethem wrote was if he was unsure of his talents, but in my opinion, his early style is one of great care, since he's introducing and exploring a myriad of topics that have the potential to be unbelievable in a negative way. However, As She Climbed Across The Table is also a sign of his early talents, and his love of science fiction is evident. Being able to master a basic love story with a backdrop of fantastical scientific explorations is no small feat. This isn't his best novel, but in a very positive way, it works as a piece that is both a light read as well as an exploration of scientific and metaphysical questions. At the very least, it proves that fun reading doesn't have to insult a reader's intelligence. If one could create a flowchart of his novels, there would be consistent correlations of themes, but also a definite rise in scope as he grows older. Some novelists tend to avoid discussions of their earlier works. With Lethem, his early writings are vibrant foundations for what he currently creates.

Work Cited:
Lethem, Jonathan. As She Climbed Across the Table. Copyright 1997 by Jonathan Lethem.
at June 29, 2011

I liked "Gun, with Occasional Music", but couldn't escape the feeling that it was better in principle than in practice. I will give this one a shot.
Also,the authors photograph is independent literature incarnate. Do you think Lethem and Franzen knowingly bought the same glasses in an attempt to confuse us? If only Eggers wore glasses, it could be a trifecta of confusion.