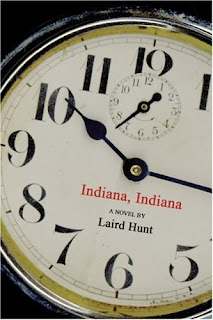 My reading of Laird Hunt's 2003 novel Indiana, Indiana made me think about the idea of "Midwestern literature." Generally, there isn't much of a niche genre for Midwestern lit, whereas there's long been a fascination with Southern Gothic and certain pockets of West Coast writing (I'll leave Brooklyn and New York out of this due to sheer obviousness). Of course, there are many, many books set in the Midwest, yet there doesn't seem to be any overt designation for the literature set in the area. This even goes for Midwestern writers--for example, as much as David Foster Wallace is loved, and for the amount of his writing (fiction and nonfiction) focused on central Illinois, he's generally not referred to as a Midwestern author. I'm mentioning these ideas because as I read Indiana, Indiana, I kept having a general feeling of "this is a wholly Midwestern novel," and not just because of the title and setting.

The novel tells the story of Noah Summers, a simple Indiana man with traces of paranormal senses, who longs to have his wife Opal returned home from her stay in a mental institution. Opal is a pyromaniac, and evidence is given for this trait being literal as well as supernatural. Noah lives his life, stays in touch with Opal via letters, and engages in various interactions with his parents and the occasional acquaintance. He's very much a product of his upbringing on an Indiana farm, yet his visions, which he takes in stride, hint to a much more complex mentality. In Hunt's writing, these visions are intense metaphors but could also be taken literally. The reader sees and feels what Noah sees and feels, even if there's obviously much more to explore and examine than what's presented.

"For many years, Noah saw things, all kinds of things, had visions, dreamed things while he was awake. Now, if he sees anything worth mentioning, he generally sees it, like most people, when he is asleep, but for a long time when he was wide awake interesting things would appear. Once, out in the south field, for example, Noah saw a clock. He did not ask Virgil, who was driving the tractor, if he could see it--he knew he couldn't--but he did ask him to stop.

What kind of clock?

It's tall. Old looking. Flowers carved into it. It's got one of them things. It's moving back and forth.

You say it's moving back and forth?

Virgil stopped the tractor and Noah jumped off and walked over to the clock, which Virgil could not see and which, Noah told him, was standing taller than either of them at the edge of the field.

Virgil nodded. Virgil smiled. What time does it say (Hunt 49)?"

Opal appears in the occasional flashback, but for the most part, she's presented from the letters she writes to Noah. At first, these messages are beautiful, innocent, and sweet, but once more examples are given as to her mental state and obsession with fire, they take on a spooky atmosphere. The letters are amazingly detailed and evocative, and it's a challenge to assess the complexities behind them. We're not meant to question whether her memories are real or not, but how they fit into the context of her sometimes dangerous personality. This takes on an even more heartbreaking atmosphere as the reader finds out just how devoted Noah is to her. He knows she has problems, but in his mind, she's his wife and should be with him no matter what. Opal's letters are full of images and an imagination that one can easily fall in love with, despite the outside problems.

Do you remember when we went to the cave? Do you remember how we walked down into the ground and the ceiling dripped and part of the time it was stone? I like how a drip can come up out of the floor. I know it doesn't really. But I like how it can. Do you know what I pretended? I told the doctor I was pretending. I pretended we were in the cave. I pretended I was on the ceiling and you were on the floor. I smiled and the smile dripped onto your head and stretched me and you grew. Then I grew and you stretched. I told the doctor. I said our heads had dripped into each other. He wrote this down on a pad. He said there was nothing wrong with this and had the nurse give me a glass of milk. He asked me if such thoughts made me happy or sad. I laughed. I told him I wanted to stand up and dance. I told him we were a single column now. 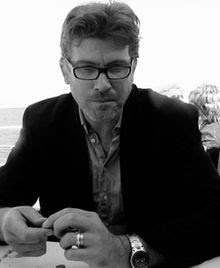 What makes Indiana, Indiana such an amazing reading experience is its balance of the literal and the symbolic. Hunt is a storyteller as well as an artist. His style is painstaking and unique, with beautiful, very carefully written and edited sentences. Some writers make the reader aware of the structure in a distracting manner; with Hunt, you take note, but it only adds to the amazing storytelling. Some of the passages are mini poems, but he's not showing off. The entire novel is so structurally sound that I never paused and wonder where he was going or what he was doing. So when a chapter opens with a poetic format, it's accepted as part of the longer narrative.

"Sometimes, as he sits in the shed, as he does now, Noah closes his eyes and listens, and, after a moment, though he has not stopped listening, the sounds of the shed, of the surrounding night, of his own faint, rough breathing fall far away, and every sound he hears is remembered.

Or spring. Spring and the rain falling

As original as Hunt's writing is, I couldn't help but be reminded of another favorite, Ben Marcus, and I mean that with all due respect to both writers. Whereas Marcus goes all out for surreal symbolism and reinvention to create plausible worlds, Hunt's Indiana is a wholly real place that gets reinvented by the surrealism. The novel doesn't namedrop any specific Indiana locales or citizens (save for the fictional family members and neighbors), nor is it any kind of love letter to the area. However, we're so drawn into Noah's world that his Indiana becomes unique and mystical without any sentimentality. In my mind, this is a landmark of Midwestern literature, whatever that means or encompasses. At the same time, Hunt's minute details are just as evocative as the bigger landscapes. Even a seemingly random (again, nothing is random or thrown in here; Hunt sets up every chapter with almost religious meticulousness) paragraph about food is written in such a stunning format that it becomes intensely realistic.

"It suddenly occurs to Noah that he is hungry, that he can't remember when or what he last ate, that the situation should be dealt with as quickly as possible. He would like to eat some corn, or peas, though not the frozen kind that sits in small plastic boxes in the deep freeze. What he wants is an ear of sweet corn, its kernels bursting with moisture and sweetness, or a tomato so ripe it has split in two or three places, or a fistful of raw snow peas with their ends snapped off. A melon would be nice. A juicy muskmelon pulled out of the garden that morning and setting in the refrigerator all day to chill. Or spinach. Huge sweet leaves of spinach tossed into a salad. Noah has the fixings, he must have, somewhere in the kitchen. Even a carrot would do. Not some wilty old thing that's been sitting in the crisper next to some played-out celery and apples for weeks, but an honest to goodness garden-fresh carrot ready to scrub and peel and eat (Hunt 145)."

As I tend to do in some of my reviews, I've been so focused on the smaller details that I've left the more concrete aspects of the plot untouched (for example, I've only casually mentioned Noah's relationship to his parents, and I haven't mentioned whether or not he sees Opal again). These details can be easily ascertained through a reading of the novel, but the real highlight were the smaller, more technical parts of Hunt's prose. I follow many writers who speak of Laird Hunt in almost reverential tones, and I've been aware of his gift as a sentence craftsman for some time. I've read two or three of his short stories and was impressed, and I checked out Indiana, Indiana on a whim. I was in the middle of other projects and getting ready to move, and I didn't think I'd have the time to devote to a reading. But I was hooked immediately and finished the novel very quickly. And now, I can't wait to read more. The novel showcases Hunt's complexities in ways that his excellent short stories can't do. I'm almost positive that I'll end up counting him among my favorite writers, and in a way, he already is: this slim, out of print novel from 2003 is one of the best reading experiences I've had in 2013. I'm glad I listened to my whim.