Book Forms: "How Literature Saved My Life" by David Shields 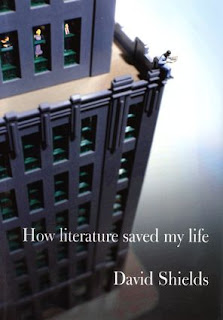 "What I believe about memoir is that you just happen to be using the nuts and bolts of your own life to illustrate your vision. It isn't really me; it's a character based on myself that I made up in order to illustrate things I want to say. In other words, I think memoir is as far from real life as fiction is. I think you're obligated to use accurate details, but selection is as important a process as imagination."

I stumbled upon this quote as I reviewed my essay on David Shield's 2010 manifesto Reality Hunger. I don't remember if Shields wrote this himself, or if it was one of the hundreds of quotes culled and reused from other sources. However, it's an apt introduction to a look at his latest book, How Literature Saved My Life, a work that is almost jarringly straightforward when paired with his often-criticized, often-praised previous work. I'm not sure if this newest book is a personal endeavor for Shields or a sort of backlash against the people who heavily dismissed his manifesto. To recap: in 2010, Shields made the claim that current literature was dead, and would eventually be replaced by memoirs, essays, and collages/remixes/sampling. Three years later, the novel is still alive and well, balanced between experimental artists and contemporary writers who are able to explore reality and create complex sociological conversations within the "confines" of a standard narrative. Today, the question is whether or not the short story has a future, but I imagine that in 2016, that form will be fine, and we'll be wringing our hands over another form (I often wonder if poetry have this problem). If all of this seems like I'm picking on Shields' argument, I'm not. As my link above shows, I loved Reality Hunger, even if I disagreed with some of his assertions. That's what made it such a satisfying experience--he formed his arguments and opinions very carefully and confidently, creating a work that truly meant to foster discussions rather than bitter arguments. In How Literature Saved My Life, Shields creates a sort of autobiographical manifesto. This isn't the writing of a person who hates or dismisses literature, but of someone with a major debt to how the form has changed and shaped him. Sure, there may be some embellishments, but the statements are refreshingly honest.

How Literature Saved My Life is written with progressions, but also goes back and forth between passages of memory and critical analysis of various texts, not so much to provide written examples of how literature reflects the reality of life (Shields is too smart to take such an obvious path), but to provide ideas he can shape into his account of his development. He mentions the reaction to Reality Hunger, but also writes many passages that reflect how art and memory are not concrete:

Shields' memories are painstakingly precise, and when he pairs them up with passages from literature, he's not going for the obvious links. Yes, there are dozens, probably hundreds, of literary memoirs out there, books on literature as life, on writing as therapy, on the world explained through select texts, etc. But Shields aims for an atmosphere of reality. This isn't a love letter to literature so much as it's an intense account of literature illuminating the truth about various life events, not just for Shields, but for everyone. For anyone who considers him/herself a writer or a serious reader, it's inescapable.

"As a nine-year-old, I would awake and spend the entire night sitting cross-legged on the landing of the stairs to my basement bedroom, unable to fathom that one day I'd cease to be. I remember being mesmerized by a neighbor's tattoo of a death's-head, underneath which were the words 'As I am, you shall someday be.' (Now, do I yearn for this state, the peace that passeth all understanding? What if death is my Santa Claus?) Cormac McCarthy: 'Death is the major issue in the world. For you, for me, for all of us. It just is. To not be able to talk about it is very odd.' I'm trying to do a very un-American thing here: talk about it. Why? Pynchon: 'When we speak of 'seriousness,' ultimately we are talking about an attitude toward death, how we act in its presence, for example, or how we handle it when it isn't so immediate (Shields 100).'"

Mixed in within longer passages are some beautiful vignettes, none of which are throwaway memories, but rather essential pieces to Shields' longer goal.

"Entering St. Francis Hospital to receive some not particularly crucial test results, I thought What the hell and crossed myself. A beatific nun passed me and said, with astonishing intensity, 'Good morning'--as close as I'll ever get to religion (Shields 118)."

"The question I've been trying to ask all along

Do I love art anymore, or only artfully arranged life (Shields 183)?" 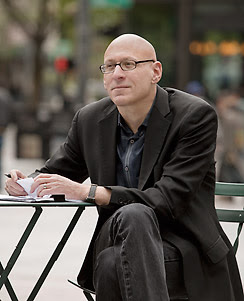 I can't imagine How Literature Saved My Life will generate the same attention (or, more appropriately, the same controversy) as Reality Hunger, but I can see people familiar with Shields reading this and pausing. However, the reader needs to realize that definitions are flexible. This isn't a book that merely defends the novel, but takes into account the written word in all of its forms--novels, stories, documents, and essays. In one of the more compelling sections, Shields records "Fifty-Five Works I Swear By." Some of these are novels and some are even television shows (Curb Your Enthusiasm). To use a very tired phrase, Shields explores these works in small snippets, but shows how they've been life-affirming for him. He's almost intimidating as far as how well-read he is, and he gets inspiration out of some very different texts. This isn't a "Top Fifty-Five," and he never claims that readers will reap the same benefits out of these works that he does. Also, some of the descriptions are intensely short and say nothing about the text except for a brief explanation. Like anyone, I imagine that Shields came to this list after years of trial and error. In my own case, my "favorite writings" have drastically fluctuated over the last ten years or so. I get the impression that Shields doesn't care what anyone thinks of this list, but at the same time, he's not disregarding the reader's feelings--it's just fiercely personal.

"Charles Lamb, Essays of Elia. The freest form: the essay.
Philip Larkin, The Whitsun Weddings. Both poetry and the essay come from the same impulse--to think about something and at the same time see it closely and carefully and enact it. An odd feature of poetry is that it's all 'true': there's no nonfiction poetry and fiction poetry. Whether it's Larkin or Neruda, it all goes into the poetry section of the bookstore (Shields 149)."

And as with Reality Hunger, I disagreed with some of Shields' opinions. Perhaps this is just a difference in opinion, but even if I understand where Shields is coming from, I can't get behind assertions such as

"The undergraduates I teach are much more open to a new reading experience when it's a blog. I know there have to be a hundred complex reasons as to why that is, but none of them change the fact that un- or even anti-literary types haven't stopped reading. They just don't get as excited about the book form. The blog form: immediacy, relative lack of scrim between writer and reader, promised delivery of unmediated reality, pseudo-artlessness, comedy, naked feeling (Shields 168)."

Nor was I drawn to detailed accounts of his early sex life. The autobiographical details are brutally honest, always tied into the text and his points, but I found myself less concerned with Shields as a person and more interested in Shields as a literary critic. In a way, despite his coming to a relatively satisfactory conclusion, How Literature Saved My Life reads as an artist's struggle with what defines art, especially in literary forms. As his two latest books show, the definition of the novel and the written word can be expanded to include a dizzying array of ideas, but the beauty comes from the constant bending, breaking, and re-imagining. When Shields ventures into old age, I can see him writing a follow-up to this, and his opinions might very well be different then. For as much as he strives for concrete answers about literature's place in today's world, he arrives at no definite assertion. And I think he knew this going in, but as any writer/reader can tell you, it's impossible not to try. I admire Shields' devotion to the subject, even if I disagree with him. Again, it's about discussions and ideas, not any face-off between ideologies.