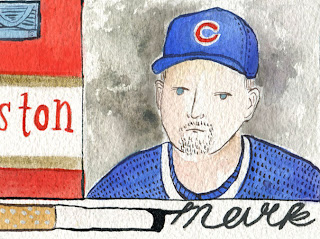 Well, I'm very excited and humbled today. Aaron Burch and the editors of Hobart published my first short story this morning. It's a feature for their April-long baseball feature, and it's called "Hands of Grace." The story went through multiple drafts and even started as something completely different from the finished piece. It's a story about an unhappy marriage and a man's obsession/crush with former Chicago Cubs first baseman Mark Grace. I'm also thrilled that it's accompanied by the terrific illustration above, by New York-based artist Katie Gross. She's a Phillies fan, but I won't hold that against her. Yet. But seriously, thank you, Katie!

Back in 2008, I remember making this ridiculous declaration to a friend of mine, claiming I'd have my first story published by the end of that year. Well, here we are, five years later. I've gone through a lot of changes since then, yet I kept focused, understood the rejections, and now I can say I've had a story published. There will be many more rejections to come, but also more publications. This is a great way to lead into my MFA Candidacy this fall.


Murphy's was packed beyond any regard to occupancy regulations, and this made Evan both grateful and concerned. (Okay, that was just a teaser. To read my whole story, click here. And click HERE for a roundup of Hobart's superior baseball pieces that have been published this month.)
at April 26, 2013