places, peoples, ghosts: Joshua Young's "To the Chapel Of Light" 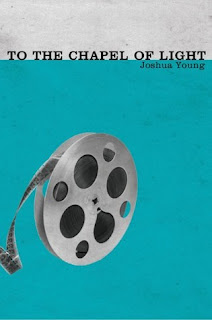 Some months ago, I attended a release party for The Diegesis, a poetry collaboration between Joshua Young and Chas Hoppe. After a late-night marathon of great readings at the party (by Young and a group of poets from Chicago's Columbia College), I ended up buying a copy of the book with the intention of reviewing it here. As is normally the case, I got sidetracked with other projects, and then I realized April is National Poetry Month. What was supposed to be a series of several poetry reviews has turned into just this single one, but I'm pleased that it's going in the opposite direction from the one I intended. I found The Diegesis to be a terrific, challenging project, but as much as I admit my shortcomings in poetry, I felt any review I'd do wouldn't serve the collection well. And, as much as the poets I know stress the universality of their work (that is, even challenging works can and should be enjoyed by people not necessarily inclined toward poetry), my limitations in being able to truly analyze the forms would show. Also, I found myself unsure where Young's work ended and Hoppe's began, and vice versa, and I would have wanted to give both writers equal footing in my own writings. In addition to The Diegesis, I also bought To the Chapel Of Light, one of Young's chapbooks. This tiny volume, picked up on a whim, ended up hooking me greatly. I've now read it three times, and for someone like myself who feels the need to stress a lack of knowledge about poetry, I was amazed at what Young packed into less than 80 pages. The book takes the form of a screenplay with a sort of road narrative, with the poems evoking prose, settings, and sometimes fictional intentions. Like any terrific work in any genre, I found myself discovering something new in my subsequent readings. Also, my last reading was bittersweet: as I started to draft this essay, I discovered that Mud Luscious Press, the publishing company that put out To the Chapel Of Light under its Nephew label, is closing shop. More on that later.

To the Chapel Of Light opens with a cast of characters, some of whom appear readily within the text, some of whom don't. The following scene is a fantastic, surreal description, drawing the reader into what appears to be a strange fantasy world. Scenes like these appear elsewhere in the text, but for the most part, Young focuses on smaller, more atmospheric details. The opening is a serious attention-grabber before more "regular" happenings ensue.

a poet comes to my door with snakes wrapped around his arms and says he's gonna pull a fiddle from the throat of a sparrow. no one believes him. his friend--another poet--makes everything worse, keeps saying, 'I like it when a camera stops outside the door like this & just waits a moment, listens.' and then he tries to pull an organ from the speakers of the stereo.

rubbing the snakes wrapped around his arms, the poet says, 'that's not what we came here for.' and so, the friend of the poet closes his eyes and opens his mouth to speak, but the words sound like mud sliding off of a roof.

he clears his throat and waits a moment.

and then, he starts talking about the camera.

After this, the travel begins: the journey is set to the chapel of light. This journey could be read literally or metaphorically. The beauty of Young's writing is that, for a book rife with potential metaphors and imagery, nothing is meant to hit the reader over the head. Some of the potential meanings are explored carefully while other meanings are casually mentioned. In one of my favorite passages/stanzas, Young explores the way a reader could potentially read the book. There are clues, but they shouldn't always be taken at face value. There's no true map, but the destinations aren't meant to be obvious.

no, we did not get a map, but we nodded as if what they said were lines and x's drawn on paper, something that could guide us. before they left, the poet said, 'the road is not your friend. no matter what you see or hear, it is simply a guide, or maybe you can look at it as the tracks hunters follow to the watering hole. so, follow it, but do not trust it. it might leave breadcrumbs to keep you lost, but only follow its sound and movement, not ever what it has left behind.'

so, here we are chasing...what? 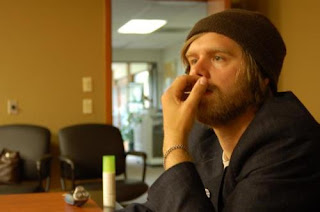 The screenplay format (interiors, exteriors, fades to black, etc.) could potentially be distracting if handled differently, but Young (a filmmaker as well as a poet), aside from the cinematic cues, isn't making this strictly a poetic imagining of a film. At times, it feels like an interpretation of what most of us have done on a boring day, namely imagining our lives as moments in a movie. Young's screenplay notations are really just a guide to the final pages. The poems, and the scenes/people therein, appear and recede. A striking, unexpected twist comes through Young's imaginings of Americana. The journey is a play on every road trip or movie set during one. Young's details are sometimes easy to miss (again, some of them didn't appear to me until my second or third reading), but he's skewering the American landscape, honoring it, and slightly lampooning its pedestal status all at once. There are even religious hints as well.

out before the horizon spreads, an old man keeps preaching about the new floods and the bursting and building of damns. but he doesn't remember that if you reach the ocean by sun up, and turn to face the land, a camera might be there to move in and hold. catch all that western dying light, the last hope for that one southern American dream that keeps tugging at the shirt sleeve of your jacket. but now, there's nothing to stop the fall, just a curtain slowly drooping into darkness. you'll still remember the light, 'cause the sun left spots in everyone's eyes.

Young's poetry is striking and can stand alone out of context to the rest of the book. The passage below is an excellent example of this, even with the explicit mention of the chapel of light. I found myself rereading passages like these and being amazed at their tangible and intangible meanings.

"to the chapel of light

if you start at the road leading up to the armory, you can hear the followers off in the trees, around a fire, dressed in dirty white, singing about god's wrath and love, and how it all coincides with the washing of sins. if you look east at dark you can see the flicker of their fire like a candle in the belly of a whale.

they keep pulling at the wire leading to the shoreline as if it is attached to the toes of god, or at least some kind of monster waiting to sink its teeth, but the wire is nothing more than a guideline for failure, or a path to salt, or even a string to sand where strangers dance on the roofs of rusted cars like they just saw the pale horse descend into the fields across town (Young 36-37)."

I tend to shy away from reviews that describe a piece of fiction as "poetic," and I honestly don't know if poets feel the same way (i.e. "your poems read like a novel"). However, Young's prose gave me that feeling. It's not that I was reading his work as fiction, but instead, it made me tune in to how my own fiction can use such vivid imagery without pointing obvious signs at it (as in "hey, look at these landscapes and tiny details"). Right now, I'm reading Laird Hunt's 2003 novel Indiana, Indiana, and I'm noticing some similarities between that particular fiction and Young's poetry. Both use evocations of American landscapes in sometimes surreal patterns, and both are are careful combination of the literal and the fantastical. I'm grateful that I ended up grabbing a copy of To the Chapel Of Light, and I'm still amazed at how such a small chapbook can do so much.

And now for a sad closing. A few days ago, Mud Luscious Press announced its closing. Founded by J.A. Tyler (an amazing writer in his own right), Mud Luscious published some stellar work, including Young's chapbook and Matt Bell's Cataclysm Baby, one of the best books of 2012. There's really nothing I can say that hasn't been said already, but I'll close on this plea: if you support a literary magazine or publisher, don't disregard any of their calls for donations or mentions of financial struggle. The end of Mud Luscious Press has been mentioned by a lot of writers as if it were a death in the family. They did some marvelous work, and it's awful to realize they won't be publishing more amazing work. Kudos to everyone involved in that organization. You were an asset to literature.