Football's Head Games (For Whom the Bell Tolls) 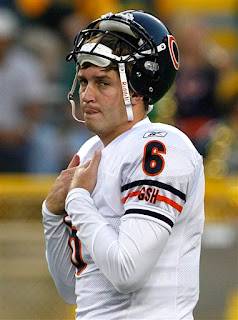 Even with (or, depending on how one looks at it, because of) Super Bowl XLV being two days away, the city of Chicago seems to have moved on from the Bears' loss to the Green Bay Packers in the NFC Championship game. It has been even more noticeable in the past few days, with Chicagoans being more concerned with digging out from the massive blizzard on Tuesday and Wednesday that effectively shut down the city. Personally, I bounced back from the loss to Green Bay very quickly, since I've never been shy about my preference for baseball and basketball, with football being a very distant third in my sports-watching hierarchy. This puts me in a minority within my own city, and also puts me at a slight disadvantage for this article. I'm a passive football fan, and there are a lot of aspects to the game that are often lost on me. Then again, my curiousness and interest in other subjects (sociology and current events, for example) can be applied to football in a more encompassing fashion. Despite the lead photograph, this piece will open about Chicago Bears quarterback Jay Cutler, but it is not about him. However, the attention he received during and after the NFC Championship game ties into a layered subject of the mentality of football, especially given a much-discussed topic that Cutler knows firsthand: concussions.

During the NFC Championship game on January 23rd, Cutler suffered an MCL tear in his knee and missed most of the second half as backups Todd Collins (completely ineffective) and Caleb Hanie (effective, but too late in the game) tried to keep Chicago within comeback distance in a game they ultimately lost, 21-14. Even before the game ended, Cutler was the recipient of immense backlash, especially since he was shown walking along the Chicago sidelines and not talking to his backups. Current and former NFL players questioned his toughness, claiming that they themselves would have to be physically dragged off the field in such a major playoff game. The news of the MCL tear wasn't made public until after the game, but Cutler's image, not that he was revered beforehand, had taken a major hit. Even news reports about the serious damage that could have been inflicted had he stayed in the game did nothing to ease the perception that Cutler gave up and wasn't trying his hardest to get Chicago into the Super Bowl.

Even non-sports bloggers were caught up in the moment. Horatio, a contributor to Careful With That Blog, Eugene, expressed these sentiments:

"For two seasons in Denver, this was Jay Cutler's permanent pose. And it didn't stop when he got traded to Chicago either. In Week 4 of the 2010 season, he was sacked for a record NINE times in the first half when the Bears were up three to zip. He left the field bawling his eyes out and didn't even come back to the bench to even support his team. Reporters were quickly dismissed, saying that Cutler had suffered a concussion and would not be returning.

Even if this is true, I refuse to believe this, if only for the idea that football players should only show three emotions. Happy, Angry, and Ambivalent. Never sadness. If any man cried as much as Jay Cutler does for getting sacked and picked, you'd kick that dude in the balls just to check to see if he was still a man."

Granted, Cutler wasn't ENTIRELY to blame for getting sacked nine times by the New York Giants; his offensive line wasn't exactly stellar. However, Horatio's opinions bring up another aspect of football: men are supposed to play through pain. It's a tough game, and if one can't handle the pressure, then get out. Masculinity has long been a favorite subject of mine on this page, and reading between the lines, Horatio's sentiments echo loudly throughout football's culture: man up. 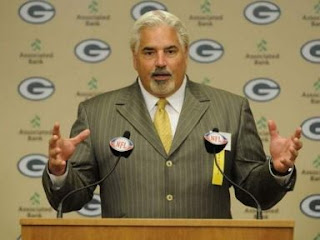 The most shocking comments came from former Packer lineman Greg Koch (pictured to the left), comments that have received surprisingly little backlash, despite their sexism and shots at Chicago's head coach:
"Man, I just never thought that his tampon would fall out on national TV...If you're a professional athlete, you answer the bell until they tell you there's no way you can play. You can brace that thing. Nobody would have kept Tom Brady off the field if he wanted to play. Nobody would've kept Peyton Manning off the field. Then you don't just sit there on the sideline and ride a bike like a little girl...I've never seen anything like it. If that's the guy leading your team, you deserve a coach named Lovie [Smith]."

Despite the insulting nature of Koch's beliefs, his notion of "answering the bell" hits close to the aforementioned subject of concussions. It's now an NFL rule that any player suffering an in-game concussion is ruled medically ineligible to play the following week. In the January 31st issue of The New Yorker, writer Ben McGrath published "Does Football Have a Future?", a stunning profile on the concussion crisis, as well as more hinting at football's toughness and masculine expectations that end up causing more problems, even in the face of a true medical epidemic.

"What was missing from this picture was the effect of all that impact on the brain. You got your 'bell rung,' they used to say. You're 'just a little dinged up.' This was not merely macho sideline-speak; it was, as recently as a decade and a half ago, the language of the NFL's leading doctors (McGrath 43)."

While concussions are serious, is this why Cutler received so much flak? Had he received a concussion instead of a potentially career-altering knee injury, would players have taken to Twitter to question his heart and his manhood? The NFL is trying to address the concussion problem while also trying to increase the regular season and, therefore, the further potential for threatening injuries. However, the resistance to changing the NFL's culture boils down to perceived toughness. Players, executives, and fans are accustomed to tough contests, even though potentially life-threatening ailments shouldn't be "just part of the game." Just below that surface, it's a question of masculinity; players don't want to be perceived as weak or scared:

"If the reaction of the league--levying a hundred and seventy-five thousand dollars in fines on three hard hitters and threatening suspensions for future infractions--could be considered excessive, then so, certainly, were the inevitable gripes that followed, about putting pink skirts on the players. October is a month in which the NFL has taken to courting female fans by celebrating breast-cancer awareness. A number of players, victims, and offenders alike, were already wearing pink accessories (gloves, cleats, chinstraps) in honor of the cause (McGrath 45)."

Given my admission of being a passive football fan, I would expect more die hard NFL fans to scoff at these assessments, especially since the week leading up to the Super Bowl is normally used to celebrate the game, not to criticize it. But as McGrath's article explains, it is possible for the game to maintain its quickness and artistry, not to mention its toughness, even with changes to minimize the potential for brain injuries. However, rule changes and even helmet redesigns are years away, and even immediate changes might prove irrelevant. Some have even called for the banning of football in the face of the concussion epidemic; this will never happen, since the NFL is a multi-billion dollar empire. My humble opinion is that athletes should be able to address the severity of the game without their masculinity immediately being called into question, especially in the minutes and hours following a game. Greg Koch probably didn't know about the severity of Cutler's knee injury, but even if he had, I suspect that he would have made the same comments. While some may laugh and say "boys will be boys," McGrath's article cuts through any gender-related implications, and while the effects of concussions are long-term, there is the potential for immediate outcomes:

"Go to You Tube and search for 'Austin Collie 3rd Concussion.' Look at the faces of the fans, many of them with their hands instinctively covering their mouths, as medics attend to the felled Indianapolis Colts receiver. Those aren't expressions of morbid curiosity. They reflect a guilty fear that, one of these days, millions of us are going to watch a man die on the turf (McGrath 51)."