The Fall Of Borders

I'm going to be unemployed in roughly six weeks. While the true magnitude of this idea has not fully hit me, the days following Borders Group Inc. filing for Chapter 11 bankruptcy have had their own moments of recognition, especially when, for better and for worse, Borders has been a part of my life for the last eight years. In all honesty, the fact that I'm acknowledging my employment with the company is against policy, since they frown upon social networking comments and blogging. While making this acknowledgment has no legal weight as a disclaimer, I feel I have the right to share my opinions in essay form. There will be no name-calling, no major revelations of confidential company policies or news (not that I have any tidbits of that nature anyhow), and nothing that can be misconstrued as anything but tough love. In essence, I'm merely writing about the collapsing world of book-selling, mirrored through a large chapter of my life. Borders is not completely going out of business, although over 200 locations are being liquidated in the coming weeks, including my Chicago location and my former store in Lynnwood, Washington.

As a teenager, I discovered my passion for writing and reading, and even at the age of eighteen, I knew that, no matter what the form, I was going to devote my life to these mediums. At that time, I daydreamed of working in a bookstore. I'd browse Borders, Barnes & Noble, and Chicago's plethora of independent shops, and imagine reading as much as I could, and sharing the joys with other readers and writers. I began filling out applications rapidly, sometimes with multiple submissions at the same location, until, at age twenty, I was finally called for an interview with Borders. The interview was focused on books, my reading habits, and how I'd go about sharing my love of books with other people. When I was offered the cashier job, I took it immediately, even taking a pay cut from my previous part-time job, just to be able to work in a bookstore.

What I didn't anticipate was the closeness of the staff. Like any company, retail or otherwise, there are co-workers who heavily dislike each other and do not get along. For the most part, Borders fostered some of the greatest friendships I've ever had. When people are drawn together in an environment based on the arts--books, music, and cinema--there's an excellent chance of having things in common. Booksellers laugh together, bond together, cry together, drink together, sleep together and become friends, partners, lovers, roommates, spouses, and allies. Personally, I know not one, but two couples, one married, one engaged, where the relationships blossomed when working as fellow booksellers. My best friend and former roommate was my old supervisor. I fell hard for a female co-worker, dated her, lost her, and after time, she became one of my closest friends.

None of this changed, but the culture of book-selling began to crack a few years ago. In the face of a struggling economy, Borders (like any major corporation) began to panic and look for outside influences for their leadership. What began as a true bookstore became overrun with people who had backgrounds in everything besides literature. They believed that they could increase sales and save the company by focusing on everything besides books. Terrance Terich, the creator of Blogsmos and a co-founder of Treblezine, is my former manager in Washington, and can recommend a book like nobody else. After he left Borders, he wrote about the troubling trends of chain bookstores. The full article can be read here, and his points are essential, even if they'd be shrugged off by corporate leaders who view books as merely an item, and not a way of life.

"When I left, the chain bookstores were coming dangerously close to devoting more space to 'other stuff' than the books. Overpriced candy lined the register aisle, knick-knacks and tchotchkes took up a whole department, and the kids section was converted into a toy warehouse. How could customers take us seriously as a bookstore if we couldn't?"

A lot of critics will make the valid point that Borders failed to make its online and digital presence known. While this is true in some capacity, any serious bookseller or book buyer will tell you that books are what make a bookstore special. Yes, it was a financial necessity to stock the stores with the 'other stuff,' but when that happened, the soul of the bookstore was lost. Yes, Borders and Barnes & Noble killed off a lot of venerable, respected independent bookstores. But in its heyday, Borders had the atmosphere of an independent shop. Even today, look at the music world. Yes, record shops are not nearly as frequent as they used to be, especially in the face of torrents, iTunes, and the Internet. But vinyl sales have increased, and local record stores are still respected, because in the end, it's not about the format, but the content. In private meetings, message boards, and casual conversations, people can and will come up with endless reasons as to why Borders had to eventually come to its lowest point and file bankruptcy. The photo below has been featured in a few news articles, and it's still shocking that this is what my co-workers and I will see in the coming weeks: 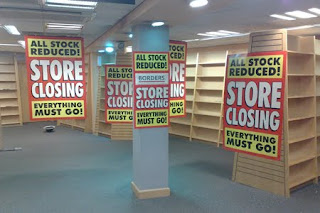 It's really like a slow death of a family member. However, I'll still have the memories of the great books that I've read and owned thanks to Borders and my co-workers, past and present. Books will never die out, and even as I begin to explore the next phase of my career and income, I'm going to be carrying a lot of happy memories with me, and the friendships that I made thanks to Borders are the ultimate employment benefits that are never listed in any employee handbook or list of guidelines. And to everyone who reads: PLEASE support your local bookstores, whether chain or independent. There can be a balance between online sales and actual buildings. Record stores were diminished, but never completely eliminated. Think about that the next time you stop into a bookstore on a whim and find yourself losing track of the time as you skim through the shelves.

And to my fellow co-workers who will also be unemployed soon: Good luck, and keep your heads up. We were never paid well financially, but none of us did it for the money. It was ultimately for the books, the people, and the atmosphere. Let's never forget that.
at February 18, 2011