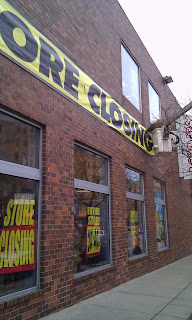 Last week, I scribbled down some gut reactions to my impending unemployment, as well as the loss of a community space and haven for friends and artists that was cleverly disguised as a retail outlet. I got some thoughts out of my system, vented some quick critiques of upper management, and paid tribute to some of the close friends I've made thanks to my (soon to be former) company. If I remember correctly, I wrote the entire piece in roughly one hour. While I'm a stickler for editing and transition, I wasn't going for anything academic or scholarly; it was one of my rare public writings that was done out of passion and stress. I posted it, linked it on Facebook, and figured that would be the end of it.

I was wrong. A lot of my friends (most of whom are former or current Borders employees) took the essay to heart, and after a week, "The Fall Of Borders" has proven to be very popular. Anyone who knows me will understand that I'm not stating this out of glee or to stroke my ego; I'm usually the opposite in that I'm normally too self-deprecating for my own good, especially where my own writing is concerned. I use the word 'popular' in the terms of hitting nerves that a lot of Borders employees felt. While I never expected this blog to have a large audience, nearly sixty people, most of them complete strangers, have posted my essay on Facebook and who knows where else. I would assume that most of the re-posts were done by friends of friends as a sort of domino effect: I posted my piece, my friends re-posted, and their friends re-posted, and so on. However, what strikes me as most touching and beneficial is that some of my close friends have written their own takes on the situation. I want to share these other opinions. Yes, I'm linking these pieces because they were written by my friends, but I'm also doing this because these essays are emotional in the literal sense. As my best friend and former supervisor told me: "Like it or not, that place was a big chunk of my life."

Soon after I posted my piece, Terrance Terich took to his blog to offer a much more detailed look at the downfall of Borders, alternating between honestly scathing critiques of company management as well as an ode to serious readers who call bookstores home. I was humbled by his decision to cite my piece just as equally as I had cited one of his previous pieces. Without hyperbole, he was one the greatest managers, both from a personal and business standpoint, that anyone could care to have. And his writing is superb:

Blogsmos: Readers Without Borders: A Diatribe and Manifesto

"But, the truth is, these self-same commenters most likely didn’t purchase books there, and in their comments about ‘hanging out’ prove that the stores were more used as libraries and social centers as opposed to community businesses. Both the corporation and the customer were complicit in this arrangement, purposefully providing an atmosphere for reading as opposed to buying, complete with comfortable chairs and cafés. What should have been emphasized is the culture and enjoyment of reading, or even building a personal library, which, in my sixteen years in the business, I never saw from a corporate bookstore."

This was followed by Jamie Thomas, a close friend who experienced a rush of sadness, not because she's losing her job, but because she's going to miss seeing some of her friends everyday. She just started her own blog as a public notebook and personal guide to the new phase in her life once our Borders location has closed. Allow me a moment of being self-serving, since I'm quoting my cameo in her list of Borders allies. But the end of the citation made me misty-eyed when I read it, since she met her husband Andrew at a Borders in Georgia, and their transfer to Chicago gave me the opportunity to meet two of the smartest, kindest, hilarious people I know:

"I met a fellow book nerd, a person who makes me eternally optimistic about my ability to read Ulysses one day, at a book store. To him I say this: our staff pick endcaps are already empty, even at just 20% off. That proves that we have good choices and that there are people out there who value our thoughts. We did everything we could, sir. Keep up the fight.

Last but not least, Jennifer Diers, a former co-worker of mine, explores the lack of serious bookstore patronage, the serious view that books will never die out, and how working at Borders mirrored a revelatory period of her life:

"I found myself while working at Borders. That sounds really stupid. Ugh. Well, it's basically true. I went into that job a nervous actress-singer-painter-writer-poet with an unfinished manuscript and a chip on my shoulder. I didn't really know who or what I wanted to be when I grew up, or when I was going to grow up, or how. Working for that bookstore, surrounded by people who love the arts and love literature, made me happy every day. I loved my job in a way that I had never really loved acting, or even singing. I finished my book while working there. I started another. I worked through my screenplays and made decisions about grad school. I got married while working there. I became a grown-up while working for Borders, and I appreciate that so much. I am thankful to the staff I got to work with, who are, for the most part, incredibly giving human beings. They love books, and they loved their jobs, and they're really hurting now (even if they won't admit it). I know, because I'm really hurting too."

I think this will be my last blog post about the demise of this corporation, but I didn't want these excellent, touching voices to go unmentioned. I cannot thank them enough for being so open and honest, and in all honesty, it's proof that an underpaid retail establishment often houses intelligent, creative people who are worth a hell of a lot more than they are paid or acknowledged. These are just a sample of the many great people I know thanks to that place. You are all eloquent, and I'm grateful to have worked with you.
at February 24, 2011