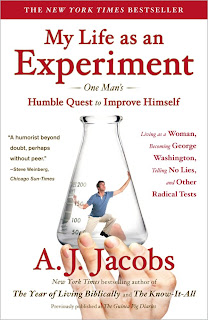 With the exception of The New Yorker, I don't read enough magazines, or at least enough of the same ones, to be able to pick a columnist whom I follow closely or admire. While this idea is slightly pessimistic, I can easily rattle off a few magazine writers who irk me more than they educate me (Malcolm Gladwell and James Wood come to mind very quickly). However, there are exceptions to this: for years, I have admired Tom Carson's film essays in GQ, and Zadie Smith's occasional writings for The New York Review Of Books have been, in their non-cliched definitions, equal parts illuminating and challenging. For the past few months, I've been making mental notes to read more writings of A.J. Jacobs, an editor/writer for Esquire. I've taken in various handfuls of his columns over the years, and in that time, he has published three books: The Know-It-All, The Year Of Living Biblically, and, most recently, My Life As An Experiment. At first glance, Jacobs doesn't seem to be the type of writer that one could analyze for a full-length review. However, I found a lot of pleasant surprises in My Life As An Experiment, as well as a few essay themes that I would personally like to see more writers attempt.

Jacobs is an excellent contemporary representation of the old adage: "it's not what you say, but how you say it." In regard to other writers, I've mentioned in the past how I've enjoyed a given book or piece or writing, but could not help but wonder how terrible it would be had it been written by another (read: lesser) writer. My Life As An Experiment is a collection of essays documenting Jacobs's attempts to apply sociological experiments to his own daily life: he does a nude photo shoot for Esquire (at the request of actress Mary-Louise Parker, who wants him to feel the vulnerability and objectification that women feel during nude pictorials); he outsources daily tasks to a team in India; he applies George Washington's moral code to his own activities, and so on. With few exceptions, these experiments could be done by any writer. Jacobs manages to elevate himself beyond the basic label of humorist with some timely phrases and understandings. For example, I remember reading the essay "My Life As a Beautiful Woman" when it first appeared in Esquire. In this piece, Jacobs sets up an online dating profile for his son's nanny, helps her write her responses, and in the process, explores some of the less-than-favorable techniques of men in the dating world. But one of the opening paragraphs has stayed with me, and reading it a second time, it maintains its subtlety and humor.

"No one can believe quite how beautiful my nanny is. Among our friends, my wife's sanity is questioned about twice a week. Michelle [the nanny] is so enchanting, my wife has actually given me permission to have an affair with her, a la Curb Your Enthusiasm. Of course, she made the offer only because she knew there was no chance Michelle would ever be interested. Michelle is too sweet, too Catholic, too loyal, too young. It's like giving me permission to become a linebacker for the Dolphins (Jacobs 160)."

Going back a little farther to his introduction, my appreciation for Jacobs's style is also based on a belief that he and I happen to share. As I've mentioned many times, I've long despised the old rule of "write what you know," since I've also long championed the idea that writers (and really, people in general) should never stop educating themselves and doing their best to gain insights into ideas, places, and people. "Write what you know" should mean "write what you now know," not "accept being limited in your scope." Granted, most writers don't have the means to drop everything to immerse themselves in a new culture, but this can be done in smaller ways.

"But I'm addicted to these experiments. I've come to believe that if you really want to learn about a topic, you should get on-the-job training. You should dive in and try to live that topic. If you're interested in Rome, you can look at maps and postcards and read census date. Or you can actually go to Italy and taste the pesto gnocchi. As the old saying goes: To understand the Italians, you must walk a mile in their loafers.
You have to be interested in the topic. That's rule number one. If you aren't passionate, it shows. But if you are committed to the possibility of change, then there's nothing like it (Jacobs xii-xiii)." 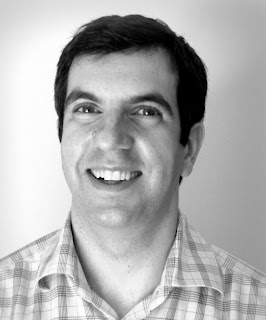 The other theme that I admire is how, whether intentionally or not, Jacobs's essays are also explorations of masculinity. In one of the intentional pieces, "Whipped," Jacobs attempts to placate his wife at every turn, to appeal to her every whim. The essay has the occasional turn into the tired "battle of the sexes" motif that has been beaten into the ground by every magazine, television show, and comic strip throughout history. However, instead of just playing it for laughs, Jacobs injects an impressive amount of research into the topic, making a normally tired subject just a bit more thought-provoking. Like any good researcher, Jacobs offers a lot of secondary sources for further reading.

"In fact, wifely obedience was pretty much synonymous with marriage. Confucius defined a wife as 'one who submits to another.' [Stephanie Coontz, author of Marriage, a History] writes that ancient Romans opposed gay marriage not because of homosexuality, which they had no problem with, but because 'no real man would ever agree to play the subordinate role of a Roman wife.'
Throughout most of history, I'd be seen as a traitor to my gender (Jacobs 184-185)."

There's a fair amount of science, too. Arguably the best essay in the book is "The Rationality Project," in which Jacobs attempts to avoid every sociological, psychological, and cognitive bias that he can think of; naturally, given human nature, this is virtually impossible. As Jacobs identifies the dozens of everyday biases "Source Amnesia," "Confirmation Bias," and "The Texas Sharpshooter Fallacy," to name a few, it becomes difficult to avoid applying such mental tics to everyday activities and consumptions.

"What makes news? The unusual and the spectacular, which by their nature distort reality and pervert our decisions. You read headlines like 15 KILLED IN PLANE CRASH IN WYOMING. You don't read headlines like ANOTHER 2,000 DIED OF HEART DISEASE YESTERDAY. This leads to the Availability Fallacy. Our lazy mind gloms on to the most vivid, emotional examples. When we think of danger, we think of hideous plane crashes or acts of terrorism, even though boring old cars kill eight-four times more people (91)."

My Life As An Experiment has its share of occasional stumbles. "My Outsourced Life," for example, could have been elevated with more citations or personal opinions as to how outsourcing has affected the current American economy. "What Would George Washington Do?" would have worked much better has a strictly historical essay, although Jacobs's attempts to live by Washington's moral code does provide an occasional chuckle. However, even that fault is a highlight of Jacobs's skills as a writer. I'm currently between major reading projects, and opted to read this book as a sort of "break" between other essays and books. This is not meant to be an insult to Mr. Jacobs, but I wasn't expecting the wealth of research and intelligence that went into these essays. It's easy on the scholarly aspects, but provides just enough to warrant further research and studies for anyone who is so inclined. My admiration for his style has increased, especially with his gentle nudges to his readers. He's subconsciously urging us to learn more, and with the well-placed information he provides, his writings are infused with just enough outside information to satisfy a casual reader, but also to satisfy people who want substance, even if they view this as a "casual read."

Pleasantly surprised describes me upon finishing "The Year of Living Biblically." I knew it would be humorous but didn't expect the extent of factual research, his humility and self awareness. One of my favorite pieces of advice (source unknown) is "Write what you don't know about what you know": Jacobs does that very well.

"Write what you don't know about what you know." That's brilliant.

I can't help but wonder if my being 'pleasantly surprised' by My Life As An Experiment comes across as insulting to Jacobs; that's obvious not my intention.

I actually just received a nice 'thank you' e-mail from Mr. Jacobs, so I guess it didn't come across that way. I sent him a link to this post, but hesitated to do so. Thanks to the Internet, I like being able to contact writers to express my admiration, but I never want it to come across like I'm doing it to get attention, if that makes sense.