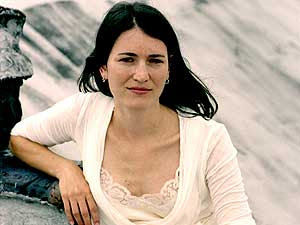 "But, as every writer knows, there can be magic in rules and conventions."
This sentence appeared in the June 21st issue of The New Yorker, in an article explaining the process of that magazine's selection of the twenty best writers under the age of 40. This may seem like a familiar mention, seeing that said list appeared, coincidentally, as I wrote about Wells Tower's Everything Ravaged, Everything Burned. After reading through that list, and catching up on some short stories written by some of those talented individuals, I wanted to read a novel by one of them, and I came across Nicole Krauss's The History Of Love. In the case, coincidence turned into intention, which then revealed itself as a pleasant mistake. A close friend of mine, with similar literary tastes, had been gushing over the fiction of Karen Russell, a woman who also appears on The New Yorker's list. Embarrassingly, I got the two names mixed up, and decided to read The History Of Love by Nicole Krauss, subliminally thinking that it was her, and not Karen Russell, whom my friend had recommended. However, after reading excerpts of Russell's work, it's obvious that both women are incredibly talented. In addition to being referred to as "genre-bending," I found that Krauss's 2005 novel was best described in terms of the magic in rules and conventions.

The History Of Love weaves together the tales of Alma Singer, a precocious teenager who's trying to explain to herself the death of her father, as well as her mother's blatant unhappiness. Her mother is translating a work (The History Of Love), and Alma ventures that the man who commissioned the translation may be a suitable match for her. Various family members are introduced, either in passing or with sizable parts, especially her brother, affectionately known as Bird, whose coping mechanisms eventually morph into a believe that he is a "lamed vovnik," a spiritual figure in the Jewish religion. Alma narrates her own parts of the novel, and Krauss does an admirable job of creating a teenage character who's equal parts regular teenager and wise beyond her years. Either character trait could easily have fallen into a sort of grandiose sketch, but, in keeping with the idea of "magical conventions," Alma is both heightened and realistic. She takes an interest in wilderness survival, since it was a passion of her father. This hobby is expressed both earnestly and with a tint of sadness, since the death of her father hovers over most of Alma's activities. However, it becomes a deft blend of obsessive list-making (a prevalent occurrence in the book), intelligence, and a realization of her still being a child.

"I kept Edible Plants and Flowers in North America under my bed in a backpack that also had my father's Swiss Army knife, a flashlight, a plastic tarp, a compass, a box of granola bars, two bags of peanut M&M's, three cans of tuna, a can opener, Band-Aids, a snakebite kit, a change of underwear, and a New York City map...
...For Chanukah I asked for a sleeping bag. The one my mother got me had pink hearts on it, was made of flannel, and would keep me alive for about five seconds in subzero temperatures before I died of hypothermia (Krauss 44-45)." 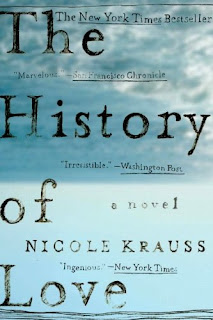 The other main character, and probably one of the most sympathetic characters in recent fiction, is an aging former writer and locksmith named Leo Gursky. He used to be in love in Poland before moving to America, and eventually lost the woman to unforeseen circumstances. This love led to the writing of a book that he long assumed had been lost, not to mention a son that grew up to become a writer, never knowing who his true biological father was. Leo's book makes its way to Chile, published under the name Zvi Litvinoff, and he eventually encounters his son at a book signing, both wishing to reach out to him, but also oddly comfortable in his usual invisible state. Leo occasionally draws attention to himself with mild accidents in public, and his every action is, at least subliminally, a way of coping with the loss of his former love. Again, much like the characterization of Alma (Alma and Leo are connected in much more profound ways), Leo is utterly convincing as a part of the novel. He's an aching combination of imminent death and past despair, without being the least bit melodramatic or overstated about his mindset. In this passage, he recalls watching his son.

"Every time Isaac moved, I mapped out the route between my place and his. The first time he was eleven. I used to stand across the street from his school in Brooklyn and wait for him, just to catch a glimpse, maybe, if I was lucky, hear the sound of his voice. One day I waited as usual, but he didn't come out. I thought maybe he'd gotten into trouble and had to stay late. It got dark, they turned off the lights, and still he didn't come. I went back the next day, and again I waited, and again he didn't come. That night I imagined the worst, I couldn't sleep, imagining all the awful things that might have happened to my child (Krauss 162)."

Given these introductions and sketches, two things should be clear. One, I'm obviously not doing the entire novel justice. At the heart of the book is a slight mystery, but one that should be semi-obvious, based on what I've written; it's even spelled out on the book's back cover synopsis. While the statute of limitations on a spoiler is long gone, part of The History Of Love's benefits are seeing the problems unfold. Two, someone unfamiliar with the book would be right in assuming, again based on my summaries, that it's one of the more depressing books written in recent years. Granted, large sections of the book are either saddening, or hinted with either symbolic or literal depression: Leo and Alma's mother are two perfect examples. Even the flashback scenes are glossed with references to the Holocaust.

"Even during the years when I hid in the forest, in trees, holes, and cellars, with death breathing down my neck, I still never thought about the truth: that I was going to die. Only after my heart attack, when the stones of the wall that separated me from childhood began to crumble at last, did the fear of death return to me. And it was just as frightening as it ever was (Krauss 129)."

However, and there's really no way to write this without being either cliched or making The History Of Love sound like a combination of a thousand other novels, in spite of the melancholy that permeates the characters, there's a definite sense of hope, at least in part because the reader can guess what the final outcome of the book will be. The fun, however, is the journey. Krauss's prose is extremely meticulous, but never borders on either mundane or careless. And, as she showed recently in her latest short story "The Young Painters," she can balance a straightforward narrative that also serves as its own mystery, in the sense of leaving the conclusion unforeseeable until the end. Her writing in this novel is an excellent mix, combining both contemporary settings and historical narratives, as well as sections that are composed exclusively as lists, and an ending broken up into careful parts, working as a stunning buildup to a satisfying, emotional ending. Much like the aforementioned Wells Tower, her plots sometimes take a backseat to structure, and while I feel it would be a stretch to call her experimental, she obviously knows what she's doing, and her voice is strong enough to break parts of the novel up aesthetically without having it be a distraction. The History Of Love is an excellent work, but, in the best of ways, I feel that her best writings are ahead of her. I feel that, despite the unanimous praise for this novel upon its publication, readers will look back at this one as a fine compliment to a more stunning bibliography.