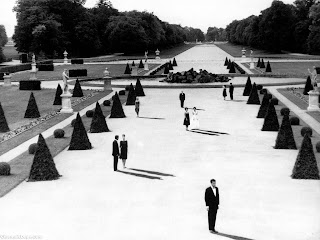 "[Art] is based on no truth that exists before it; and one may say that it expresses nothing but itself. It creates its own equilibrium and its own meaning. It stands all by itself, like the zebra; or else it falls."--Alain Robbe-Grillet

Earlier this year, I began, for lack of a better term, sporadic readings of Alain Robbe-Grillet's literary manifesto For a New Novel. While many of his assertions and hypotheses make much more sense now than they did when I was in college, it didn't hook me as much as the theory works of Italo Calvino or Milan Kundera, to name a few. His fictional works are much more satisfying, and I have thoroughly enjoyed two readings of Snapshots, a slim short story collection that is heavy on descriptions and forms, rather than plots, but still works both emotionally and aesthetically. For example, this passage from "The Shore" has long struck me as a particularly vivid piece of writing:

"In front of them, a flock of sea birds walk briskly along the shore, just at the edge of the waves. They move parallel with the children, in the same direction, about a hundred yards farther on. But, as the birds do not move as fast as they, the children again gain upon them. And while the sea constantly wipes out the starry tracks of the birds, the children's footsteps remain clearly inscribed in the barely damp sand, in which the three lines of footsteps grow longer and longer (Robbe-Grillet 41)."

I'm not at all ruling out a return to a more detail analysis of Robbe-Grillet's fiction or literary theories; however, I felt that these were essential introductions to this piece, a look at the 1961 film Last Year at Marienbad, directed by Alain Resnais and written by Robbe-Grillet. I was tempted to merge some thoughts on this film along with the book writings of Robbe-Grillet, but realized that the film is meant to stand as its own piece of art. However, the opening quote (taken from For a New Novel offers one of the best introductions to the film, a work that is polarizing, unabashedly (even insistently) confusing, and constructed as an almost literal definition of postmodernism.

The film takes place inside and outside of a grand hotel, full of vast, winding corridors, intricate, priceless decor, and a garden that seems to stretch for miles, even maintaining an almost canvas-like vanishing point. The hotel is patronized by upper-class visitors, but the primary ones are a man (unnamed, but dubbed 'X' in the screenplay), who consistently pursues a woman ('A'), claiming that they met the previous year, that they shared a brief fling (or, depending on the various interpretations of the narrative structure, he raped her), and were planning on going off together. Consistently looming in the background is another man ('M'), possibly the lover of 'A,' or her husband, a virtually silent, cold figure who seems to hypnotize the other two whenever he's present. Giving letter designations to these characters could also stretch the idea that their various interactions could be worked out into various mathematical formulas. This could literally be a stretch, but after one screening of the film, the idea that any hypothesis can be applied becomes logical.

The film opens with a consistently repeated voice-over, offering a poetic description of the hotel, including mentions of the corridors, the black mirrors, and the footstep-muffling carpeting. This then blends into a scene in which the hotel guests are watching a play, giving the film its potential turn into a standard narrative: perhaps the voice-over was part of an avant-garde play. But, just as quickly, the viewer is thrust into continuing motifs and alternating emotions, with scenes both beautiful, playful, and downright discomforting. Any attempts to keep track of the time, the man's claims, and the linear narrative become blurred very quickly, and, for at least the first screening, it helps to get lost in the shifts. 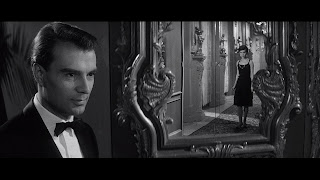 The above still is merely a hint of the film's visual pleasures. 'X' (Giorgio Albertazzi) stares at 'M' (Delphine Seyrig), who approaches down the hall in a black dress. Her face and body language is apprehensive, given that 'X' has not stopped insisting upon their past rendezvous, and at times has been either creepy or aggressive in his insistence. His look could be read as either flirtatious or lustful, appropriate given that his actions in the film border on either one of those descriptions, never occupying a happy medium. Even though the mirror stages her away from him, the shot is set as if they're standing next to each other. Other examples of Renais's direction involve scenes that begin as freeze frames before moving into fluid action; single frames of 'M' with a white dress quickly inserted into scenes of her standing at the hotel's bar in a black dress, with the single frames flashing more and more quickly, alluding to either a flashback or 'X''s fabricated memories of her; and one of my favorite shots in the film, an inexplicable lineup of men turning, almost ballet-style, shooting guns into a shooting range behind them. No dialogue, no explanations. Just symmetrical actions that are both beautiful and jarring.

Two other key contributors to Last Year At Marienbad are cinematographer Sacha Vierny and music composer Francis Seyrig. The cinematography, combined with the film's black and white footage, is lush, but also just as jarring as the actions on screen. Some of the scenes are lit almost blindingly bright, but can also move, sometimes as quickly as the next shot, to almost pitch-black hues. Granted, quite a bit of this was probably done under the guidance of Resnais, but Vierny's touches are, whether obviously or subliminally, constantly noticeable throughout the film. Seyrig's compositions are sometimes evocative of horror movies: shrieking violins and dramatic rises accompany some of the more frenetic actions, and I found myself almost expecting a "jump" moment that is usually indicated in horror. Instead of just working as a pleasant background diversion, the music is essential, not in making the audiences feel what they "should," but becoming another part of the screen, "acting" just as much as the characters. These elements are just parts of what make Last Year At Marienbad such a mental exercise.

So the question that invariably arises in any discussion of this work: What is it all about? What actually happened (or will happen) between 'X' and 'A'? The original trailer for the film is almost a spoiler, with its heavy indications that the audience becomes a part of the narrative, and it's up a given viewer to "decide" what happens or what the film is about. It's not so much a mystery or a puzzle, but mainly an exercise in perception. So many elements are intentionally left blank (such as the theme or rape, or of 'M''s true identity), and so many elements are repeated. It's virtually impossible to give any clues to anyone who hasn't seen the film. Despite my earlier claim of separating Alain Robbe-Grillet's non-film writings from his screenplay, another passage will serve as yet another introduction to the film. View it as a mystery, a surrealist art piece (although I find that classifying Last Year At Marienbad as a surrealist picture), or a Memento-like cutup. What it really boils down to is suspending any dependence on traditional narratives. Robbe-Grillet says it best. This passage is about fiction, but aptly describes the experience of the film classic. And if one is to take this below citation at face value, it renders my even attempting to describe this film as pointless. And this is a chance I'll gladly take, at least to add another layer to this mental exercise.

"But we are so accustomed to discussions of 'character,' 'atmosphere,' 'form,' and 'content,' of 'message' and 'narrative ability' and 'true novelists' that it requires an effort to free ourselves from this spider web and realize that it represents an idea about the novel (a ready-made idea, which everyone admits without argument, hence a dead idea), and not at all that so-called 'nature' of the novel in which we are supposed to believe (Robbe-Grillet 25)."