One Night Without the King 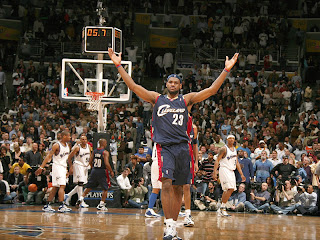 Last night, I took my dog for a walk, enjoying a rare July evening not weighed down with excessive humidity, a rarity in Chicago. After returning to my apartment, I made a light dinner and had a few hours' worth of conversation and beer with my older brother, who's visiting from Seattle. This all came after an easy day at work, and I don't think that too many people would disagree that the aforementioned activities were the ingredients of a nearly perfect summer night. However, the only real deviation came in the middle, when I excused myself to check ESPN.com, and found out that LeBron James had announced his intention to sign with the Miami Heat for the upcoming 2010-2011 NBA season. I watched a thirty second video clip of the moment of his announcement, and then got up from my desk to resume the more noble activities.

For the past week, I've unabashedly been a part of the herd, checking websites, reading about rumors, and keeping on top of all of the NBA free agents. Hell, I even found myself partaking in the ESPN page that was modeled after a slot machine, clicking the button to see the possible destinations of James, Dwyane Wade, Chris Bosh, Amare Stoudemire, and even David Lee. As you very well may know, I'm a Chicago Bulls fan, and I've spent the last week daydreaming about the possibility of James teaming up with Derrick Rose and Joakim Noah, adding scoring and an interior presence to a young, playoff-tested team. As the days went on, the possibility of James signing with the Bulls seemed less and less likely, but my enthusiasm didn't waver. In all likelihood, based on my personal hunches (not to mention way too many readings of every possible basketball writer available on the Web), I thought the likely choice would be for James to remain a Cleveland Cavalier. Of course, this didn't happen, but the fact that he chose the Heat is not the problem. The problem was his decision to announce this as a one-hour special entitled "The Decision."

And with that, the floodgates opened, and within the course of a day, he went from being one of the most well-liked athletes to one of the most despised (at least outside of South Florida). While I refused to watch the TV special, something was made painfully clear, but should be obvious--LeBron James is an entertainer above being a basketball player.

Of course, he's a phenomenally talented basketball player, if not the best living player right now. For all that the Cleveland franchise has done to bring in complimentary players, James hasn't played on a great team; he's only reached the NBA Finals once in his career. Like any player, he claims that his goal is to win championships, nothing more. And his signing with Miami proves that it's not about the money, since he could have earned $30 million more by signing with the Cavaliers. And it's very likely that the Heat will win at least one championship, if not more. The NBA's Eastern Conference is stronger, but still lacks the team depth of the Western Conference. If I were a coach or executive with the Heat, I'd be concerned about the team's chemistry. After re-signing guard Dwyane Wade and forward Chris Bosh, the Heat now have three players who are used to being the best on their former teams. One of those players isn't going to get the ball as much as he wants, which, if a championship is truly the goal, shouldn't be that big of an issue. However, the Heat are now like an exaggerated fantasy team. Someone's numbers are going to dip, and time will tell if that leads to any friction during a long season.

My decision (no pun intended) to not watch James' TV special was due to the fact that the off-season free agent parade had become a show in its own right, rather than a true look at how a given player could make a new team even better. The day before, the Bulls signed forward Carlos Boozer. In any other off-season, this would have been phenomenal news, since Boozer gives the Bulls some much-needed inside presence to compliment Noah, and his playoff numbers are seriously higher than his regular season totals. However, this signing took a backseat to "LeBron Watch," and it was then that I decided to save my energies for actually watching the games when the new season begins.

In watching the brief clip of James, the notion that he's an entertainer was never in doubt. He says everything that anyone would expect him to say, and the segment with Jim Gray comes across like every pre- or post-game interview given by any basketball player. James is a consummate professional, and as he rightfully states, the country (not just Ohio) has seen him grow from "an 18-year old kid to a 25-year old man."

The media will continue to feed on this for several weeks, and by even posting any thoughts about this, I've voluntarily included my voice in the millions that have shot opinions back and forth. However, I reached my limit and decided to extend my energies last night to more satisfying activities. And when I do resume focusing on this year's NBA season, I will give more attention to more worthy, and less expected story lines. The Bulls are a much better team with Carlos Boozer, and the Oklahoma City Thunder have wisely locked up star Kevin Durant to a long-term contract. But more importantly, the Heat won't be the only story. The younger, hungrier teams will be waiting once the season kicks off in October.
at July 09, 2010