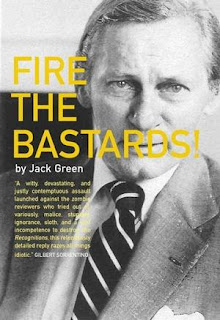 Last month, William Gaddis's first two novels (The Recognitions and JR) were reprinted in new paperback and e-book forms by the fine publishers at Dalkey Archive Press. These reissues were met with muted but enthusiastic response, since the works have been out of print for a few years since their previous release by Penguin Classics. I'm always excited when the works of William Gaddis receive new attention, but I was even more excited when I found out that Dalkey Archive was also publishing Jack Green's Fire the Bastards!, an underground rant against the poor early reviews of The Recognitions. I've read about Fire the Bastards! in the occasional Gaddis essay, and I was quick to snatch up a copy upon its release. In some paradoxical way, I knew what to expect going in, but at the same time I had no idea how Green went about his critiques. I was also challenged by wondering how to go about this written response, since I realized it would be too much to have this be a review of a review of multiple reviews.

When The Recognitions was first published, the reviews were a combination of scathing, confused, and outright wrong about its meaning and often confusing plot structures and dialogue sequences. Upon reading the book, the pseudonymous Jack Green took to his underground publication, entitled newspaper, to provide detailed, unrelenting criticisms of the reviewers who failed to see the genius in Gaddis's work. Steve Moore's introduction to the 1992 printing (which is also available in this year's edition) provides some valuable background into Green's life, and the details are just as entertaining as the book's content.

"He entered Princeton in 1947, where he majored in music, but apparently he left without a degree. In the early fifties he lived in Greenwich Village, studied the psychological theories of Wilhelm Reich, and worked on trying to perfect various gambling systems.....
He then changed his name to Jack Green, perhaps taken from Jack Green's card--a horse-racing tip sheet of the 1940s. Supporting himself as a free-lance proofreader--by all accounts a quick and accurate one--he started newspaper, which he had been planning since his insurance company days (Moore v)."

Another important part of Moore's introduction is as follows: "Green learned of [The Recognitions] from a review in the New Yorker shortly after publication in 1955, and though he admits that he had some difficulty adjusting to it at first, by 1957 he was convinced it was 'a great work of art, the best novel ever written in America.'" Before getting into Green's writings, one would assume the critics of The Recognitions suffered from the same early struggles that Green had. However, Fire the Bastards! is not just a screed against poor book reviewing, but a condemnation of plagiarism, intentional boasting of not finishing a work one is meant to review, and the general attitude of giving up on something that takes time to appreciate. It took Green two years to come around to the book, and it took me months to read it myself (and I'm sure my review has some errors Green would have been all too happy to point out). This problem is the only one not truly touched upon. In the haste to have reviews out in a timely fashion, challenging books might not be given adequate time and reading. Even the fastest readers need time with something as complex as The Recognitions. But, even with this in mind, Green bitingly attacks the other faults committed by the book reviewers. His style is similar to that of Gaddis, taken even further. With the exception of exact quotations, he writes with little to no punctuation or capitalization. It's not distracting, but rather gives his words even more emphasis. Even without adherence to grammatical rules, there's no doubt he's a fiercely intelligent reader and critic.

"FIRE the anonymous hack of the toronto globe & mail he didn't finish the book either headline: It Beats Us

Frequently we sample a new book, reading a few paragraphs here and there to get the hang of it; but several such samplings left us blanker and blanker. It is a most humiliating thing for a reviewer of upwards of 40 years' experience to not be able to understand a novel, not even get a clue. So the samplings became fewer and fewer and farther apart and had stopped when we discovered the able Chicago Tribune man, Edward Wagenknecht, was in the same fix.

'able!' the provincial disciple acknowledges his master--at gold-bricking after 40 years experience faking cant he even write his own review? almost 1/2 of it is right out of wagenknecht (Green 5)."

What I didn't anticipate in my reading was how funny Green is at his most scathing. I read the following line multiple times, and its humor was never diminished:

"im biased for reviewers who favored the recognitions except some who write like cold oatmeal (Green 8)."

For all of my appreciation of Green's intelligence, I'm not going to say, had I read The Recognitions without any background information, my critical eye would have seen it as a landmark novel; I likely would have been just as lost had I not read multiple essays about the book before my attempt. And as I mentioned in my linked piece, I know I missed a slew of references, allusions, and translations, but what I got out of it far outweighs what I didn't. But the heart of Green's argument is that esteemed, professional book reviewers were so quick to find no redeeming value in it. Furthermore, Gaddis's lack of dialogue indication, while relatively daring at the time, was viewed as too anti-establishment and yet another demerit to an already difficult work. This provides yet another method to Green's (emotional) madness, ridiculing the expectations of conformity. Similar to Gaddis, one sometimes has to carefully dissect Green's longer sentences to see the clear meaning embedded in them:

"(yes i know youve heard all about conformity madisonavenue & individuality & you dont want to read another word about topics stale usedup & newly unfashionable which means: youve been conned again! when an idea starts to look dangerous to Them they destroy it with the novelty trick they grab onto it themselves & write it up everywhere & everyphonyway until you get sick of it, the novelty wears off, the ideas not dangerous but passe & meantime the right people have made plenty of money out of it especially compared to what theyd make if they wrote about their own ideas but ideas arent like hats 1 fashions not replaceable by another except among the fashionable timekillers 'conformism's just as important before during & after the henry luce boys get the hots for it)(Green 34)" 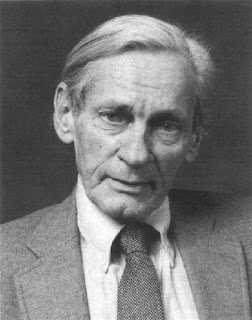 As I neared the end of Fire the Bastards!, I couldn't help but wonder if Green was too scathing for his own good. There's such a great buildup, and there are many terrific lines, but I had the occasional feeling that his critiques were repetitive. And given the style, it's easy to see how some assumed, according to Moore, that Gaddis himself was actually Jack Green (this was a rumor that has since been dismissed). Had this been true, then it would have been an utter embarrassment. On the flip side, I wonder how many writers would really want someone like Jack Green on their side. It would be gratifying to have a champion, someone willing to research and defend against negativity, to a point. But Fire the Bastards! is a rare piece of literary criticism that manages to highlight an entire industry, rather than just a single author's negative reviews. The research is astute, and there is undeniable creativity in the venom. And equally as rare is the realization that the work can potentially be read on its own without one having read The Recognitions (although I wouldn't immediately suggest this). So while I cannot help but wonder if Green's work is just a bit too over the top, it's an admirable study of someone passionate about a work of art, done in a style that would have been ridiculous in other hands. Green hits his targets and makes this a helpful companion piece. My own take on it might not be the most in-depth, but the citations are good examples of what he did, and it's proof that literary criticism isn't always solemn and stodgy. Most importantly, the slim volume likely did more for a literary classic than any more academic analysis could have done. By digging into the novel's imagined faults, Fire the Bastards! is just slightly more an appreciation of the book than a rant against the critics. Just slightly, but enough that both sides can be easily ascertained.