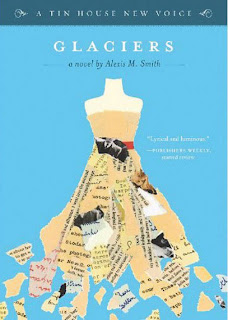 I've mentioned this at least once in a previous post, but I rarely find myself on top of literary debuts. Given my reading schedule, it's difficult to squeeze in every new, noted novel, although there are rare exceptions (The Art of Fielding is the most recent example, but I read it many months after its initial publication). I'm still making mental notes to pick up Téa Obreht's The Tiger's Wife and Tom Rachman's The Imperfectionists, just to name a couple recent examples. However, I bought and read Alexis M. Smith's debut novel Glaciers almost immediately after its publication, and for no good reason other than the fact that Tin House published it. It's one of my favorite literary magazines, and I figured that, even if I felt indifferent to the novel, I would be supporting an emerging writer in addition to an excellent publication. Instead, to use an adjective that sometimes throws up a red flag, I found myself reading one of the more beautiful pieces I've experienced in some time.

Glaciers is a novel about a day in the life of Isabel, a young, twenty-something woman living in Portland by way of Alaska. She handles damaged books in a small library, is attracted to a veteran named Spoke (this nickname is explained in harrowing detail), and has a penchant for collecting postcards in secondhand shops, imagining places she has not been, and concocting background information on the people whose notes grace the pieces of paper. Her best friend, nicknamed Loon, is an occasional, yet consistent presence in her world. Throughout this particular day, the usual will happen, along with the unusual. Isabel is a character whose brain and imagination are always active; she's just as comfortable observing the world around her as she is reflecting on her childhood, constant moving, and the divorce of her parents. These early memories, much like her day being normal and abnormal, are hints to her current state of mind, as well as seemingly random sketches of her observational skills, honed at an early age. One of the better examples comes early in the book, and manages to showcase Isabel's mindset, as well as giving a pretty explicit window into the book's title.

"The ferry from Seattle was crowded with other families, not Alaskan families but the kind of loose-minded travelers who pointed and photographed without really seeing.
Like other great creatures before them, the glaciers were dying, and their death, so distant and unimaginable, was a spectacle not to be missed. The ferry slowed where a massive glacier met the ocean; a long, low cracking announced the rupture of ice from glacier; then came the slow lunge of the ice into the sea. This was calving--when part of a glacier breaks free and becomes an iceberg--a king of birth (Smith 16-17)."

These observations on natural phenomena manage to link quite well to Isabel's current activities. There is a definite system at work, as Smith shows how everyday actions can be natural and sociological as well as "scientific." Isabel feels the pulse of both, especially when interacting with Spoke. Smith crafts their interactions very sweetly. It's an old-fashioned courtship, but the reader is still left wondering how it will play out.

"Good morning, Isabel, he says without looking up. He's reading the newspaper.
Good morning, Spoke, she says.
She turns to the cupboard and waits to feel his eyes on her. Waits, and pretends to look through the box for a tea bag, though it is right there, the Earl Grey she has every morning.
There is a physics to their relationship. She feels the attraction as a force, like the gravitational tug of celestial bodies in orbit; but it seems that to touch, one of them must crash into the other (Smith 43)."

Just like I wrote that "beautiful" is overused in book descriptions, I've also pointed out my disdain for describing passages as "poetic." However, it's impossible not to use that term in relation to Glaciers. And for all of the emphasis on "serious" subject matters, Smith's humor is reserved, yet evident. There's the occasional funny spark that adds to the emotional complexities.

"Isabel turns to the rack nearest her. The dresses are from the 1930s, some of them so delicate she can't imagine anyone but ghosts wearing them. Faded flowers, velvet trim worn down to the ribbon, buttons nodding at the floor.
She hears the shopkeeper tossing things around in her storeroom. Something falls and the lady curses, but it's a stifled, antiquated curse Isabel can barely make out. Something like bollocks (Smith 79)." 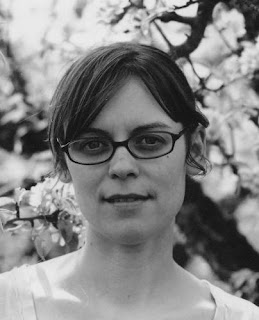 Perhaps this is going out on a limb, but here's a recap of some of Isabel's traits: she lives in Portland, frequents thrift stores, works in a library, and has a taste for vintage dresses. Just based on these ideas, and without referencing the novel, it's possible that someone would assume Isabel is a hipster. However, I find this to be another way in which Smith turns around the usual expectations. Isabel is not jaded or sarcastic; she's truly fascinated and consumed with these elements in her life, and even when she remains distant, it's a mark of her true personality. IFC's Portlandia is the best satire of West Coast subcultures, but in Glaciers, these collections are not meant to be typical, since Isabel's journey and thoughts are fiercely personal. The last thing on her mind is getting "cool points" from anyone else, and her Portland is her home, rendered as both contemporary and representative of classic urban scenes:

"Outside at midday, Isabel feels the last breath of summer on her skin. The hum of the library is still in her ears, but drowning now in the noise of the city. She smells the food carts from blocks away, the hot oil and garlic and roasting meat that flows through the air every workday, mingling with the rank warm sewers and the burnt-oil musk of the buses and delivery trucks, and under that, when her feet tread the grass under the trees, the smell of damp bark and vegetal decay (Smith 71-72)."

Glaciers , in essence, is a novel of discovery. The actions point toward a party that occurs at the book's end, and the realization that Isabel has her own story to tell. Her life is a series of discoveries, and while they all add up to make her who she is, there's a sense of her being guarded to the point of preferring other people's stories when she definitely has her own to tell. However, she's never truly at fault for this, since her actions and love of remnants and historical pieces (both physical and intangible) are not presented to cover anything up; rather, it's a lead-up to her vocalizing the many stories that she has inside. Smith provides some closure to the characters, but leaves plenty of necessary ambiguity. This is a single day, not the culmination of an entire life.

Via Twitter, I've devoted more than a few posts to how much I enjoyed this work. It delivered much more than I anticipated, especially since I picked it up solely out of respect for the publisher. With that in mind, Tin House has succeeded: the journal put its efforts behind a new novelist, and let the work speak for itself, to the point that I was consumed by the words, not the presentation. This is an incredibly moving piece of writing, and Alexis M. Smith is worthy of the attention she is now receiving. She's an acute storyteller, and her attention to details is nothing short of stunning.