It has been awhile since I've done one of my college newspaper archival pieces. For this installment, I'm sharing the film review/press junket I took part in for the 2003 Ron Shelton film Dark Blue. This junket marked my first (and so far only) time in Los Angeles, California, and at the age of nineteen, I felt I had "made it" in some way, being one of a few dozen college journalists flown out for the event. As time went on, I looked back on my experience with an air of negativity. I was in Los Angeles for roughly 36 hours, and barely had time to think or take anything in as we were shuttled from one interview to the next. Since I wasn't twenty-one, I couldn't join anyone at the bar, instead spending my one free evening having a few beers in my room (courtesy of a fifty dollar minibar voucher), and taking a long walk around the streets of my hotel. I have hazy memories of the film, but for the most part, the cast and crew provided some good conversation pieces. This is my longest Chicago Flame article, since it has parts of interviews with virtually everyone attached to the film. With my previous college newspaper archival pieces, I offer a "warning" about poor writing, and this is no exception. Looking back on the original published copy, I was deeply embarrassed at the filler interview quotes, the terrible transition, and the obvious attempt to stretch the piece out. I've made a lot of cuts and changes to this reproduction, but there are still a lot of problems. I apologize now.

A Dark Blue Fire Of Intensity (Originally published in The Chicago Flame, February 25, 2003) 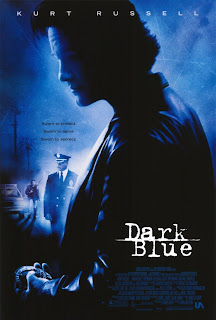 Every once in awhile, a film project will come along that provides immense satisfaction for everyone involved. Dark Blue is such a film, providing an ideal cop drama that allowed the actors and director to really sink their teeth into the roles. Whether veterans of police drama (actress Michael Michele) or novices (director Ron Shelton), Dark Blue owes its success to sheer devotion and skill. The film focuses on veteran LAPD officer Eldon Perry (Kurt Russell), and the chain link of corruption and choices from individual officers and their superiors. However, opinions vary on the film's themes and values. Dark Blue opens with actual footage of the Rodney King police chase and beating, mixed with recreated images. Immediately, we're transported back to the time of a modern-day revolution, an uprising against police corruption, and the systematic, previously unquestioned white control of the police and judicial systems.

This premise does drive Dark Blue, yet at the same time it merely serves as a backdrop. The true focus targets the choices and personality of a veteran white cop in this hierarchy, a man marred by corruption and committed to justice at all costs. This cop is Eldon Perry, a man who abides by simple codes of the LAPD and is truly honored to be carrying on the traditions of his police family. "I'm a gunfighter raised by a family of gunfighters," he says. With that, we're drawn into a police world not unlike the Old West. Cops act like killers for hire, large posses willing to play by their own rules. Many people are going to walk out of the movie theater and will feel cheated. The two main complaints will regard the film's ending and the other--probably the biggest one--will attack the parallels to Training Day. After emotions settle down, audiences will realize they have seen one of the most visually stunning, character-based police dramas in recent memory. Dark Blue reeks with realism because audiences are accustomed to constant news reports of corruption and goings-on with police departments across the country. The underlying philosophy of the men in blue is 'if justice is served, what's the harm?'

"Kurt doesn't think it's a cop movie," says director Ron Shelton. "His character is a product of a lot of things. The question is: Why did he cross the line?"

Kurt Russell has more direct opinions of his character. "Eldon isn't an antagonist, he's just a guy who gets shit done. It's not easy to put a human in this position. His personal life is a disaster, and he's not aware of it."

Adds Shelton: "We need to ask ourselves: Could I be an Eldon Perry?"

"Perry is who we're not," continues Russell. "Yet you see Eldon as the way you are."

In the film, audiences get the sense that none of the characters are truly honest. In addition to the ladders of superiority, new officers have to be broken into the rules. Bobby Keough (Scott Speedman)is Perry's partner, the young officer in focus. He's not of Perry's stature, but he desperately wants to be so. Keough is inexperienced, yet has the rough ideas of the silent pact among white cops. Early in the film, he is under review for possible reprimands after a "killing." The review board acquits him by a majority rule. The lone official who votes against him is black deputy chief Arthur Hammond (Ving Rhames), a man who badly wants an equal system, but is a lone voice among a crowd of deep-rooted whites. "Keough definitely betrays himself," says actor Scott Speedman on his character. Bobby Keough is naive yet at the same time aware of the corruption that surrounds him. He's in awe of his worldly partner and is willing to go to drastic lengths to prove himself. "I identify with Keough," says screenwriter David Ayer. "You have to develop who you listen to and don't listen to."

Perry's office assistant is Beth (Michael Michele), a cop for whom sexuality is as much a part of her life as her badge. She is sexually involved with Keough, and that relationship begins a domino effect that leads to the film's stunning (but not surprising) conclusion. In the tradition of Serpico and Training Day, Keough realizes that he can help put a stop to some of the LAPD's power problems by going against his partners. His respect for Perry is wounded following a street killing that goes against Keough's sheltered conscience. Perry's ethics become too hot to handle. 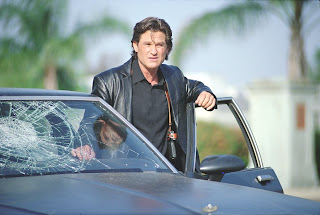 Kurt Russell gives Perry a wonderful spectrum. The character divides up audience reactions, being both unjust yet a victim of his police upbringing. His final vindication does not come without a high price. It's a classic example of learning the hard way, which comes as an ironic shock to an officer who has seen everything. Scott Speedman is convincing as Keough due to his physical appearance as well as a strong performance. The film needed a stark visual difference between Perry and Keough, and Russell's grim, weathered face is the experience to Speedman's eagerness and unproven image. David Ayer, like virtually all screenwriters, is likely to be overlooked should the film end up being a critical success. Following the success of Training Day, Ayer does not fit the usual stereotypes of a writer. He's not idyllic and sees Hollywood and his writing as a mere business.

"[Writing] is a cycle, like the movie Adapation," he explains. "I thrive under pressure." While writing Dark Blue, he went against the rules and thought ahead to production and casting of the actual movie. "I don't let movie characters influence my writing, but I thought about Kurt [for the lead role]." The film was plagued by budget problems, but those blocks were eventually overcome. "Training Day had a $40,000,000 budget, but Dark Blue had a $4.50 budget," jokes Ayer. "But Ron Shelton can stretch dollars."

"We were shooting on the fly," says Shelton. The director did a wonderful job of organizing Dark Blue's multiple themes, but made a noticeable turn from his usual movie fare. Shelton is most famous for directing major sports films, from Bull Durham to White Men Can't Jump. For such a major break from routine, it's pleasing to know that Shelton is just as knowledgeable about the streets as he is about the ballparks. This goes to show his versatility: "Any movie can be a cop drama," he says. "But I made Dark Blue more about Eldon Perry."

Dark Blue should open to favorable reviews. The stars and creators of the film have made great strides to make an entertaining, gripping police drama, and their devotion to the project should be duly noted. No matter what their prior experiences dictate, satisfaction and optimism will the guide the film's respect. This film was shelved for over a year because of the strong [post 9/11] themes. It turns out that the wait was worth it, for this film is a visually attentive, well-acted piece that operates on meticulous and strongly connected layers.
at March 30, 2012