"The Ecstasy Of Influence:" Titular Truth In Advertising 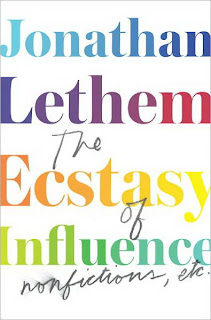 Last year, after consistently reading a good majority of Jonathan Lethem's novels, I picked up his essay collection The Disappointment Artist. The slim volume was enjoyable, especially his take on John Ford's The Searchers (I wrote a film and textual analysis of it, which has proved to be my most-viewed post ever, but mainly because of Google image searches; however, I hope people read my work instead of just browsing the film stills). While I highly recommend Lethem's nonfiction, I would be hard pressed to recap the majority of the topics contained in that volume. That's not to say that it's forgettable, but after a year and a half, only small fragments stick in my mind. Nonetheless, I was excited to read his next batch of essays, the recently published The Ecstasy Of Influence. The work is longer, the topics are more varied, and while the pieces scan multiple years, Lethem has, like any good writer, grown wiser (in its many definitions). It would be difficult and pointless to compare two very different collections, but I'm sure that the newest collection will be sticking with me much longer. I went into both books with the same mentality (I always enjoy checking out the nonfiction work of my favorite fiction writers), but The Ecstasy Of Influence feels much more determined and curated.

As with any collection of separate pieces, it would be much too time consuming to analyze every essay or story (in Ecstasy, there are a couple of fiction pieces, too). With that in mind, it's also difficult to select the most representative works as well, since Lethem has assembled one of the more eclectic volumes in my recent memory. There are analyses of various writers and texts, poetic sketches of Brooklyn, and fantastically entertaining interviews with James Brown's band and Bob Dylan. A good starting point is one of the opening pieces. I had no idea Lethem spent years working as a bookseller, and his memories are pitch-perfect for anyone who works or has worked in this noble trade.

"I was what I would be if I wasn't a writer: a clerk in a used bookstore. No other possibility. I worked in eight bookstores in fifteen years, five years during high school and college, then ten years straight after that. Shelving, running registers, re-alphabetizing sections, learning the arcana. I was bitter, intense, typical, holding myself superior to customers who could afford the best items I could only cherish in passing, part of a great clerkly tradition. I was certainly aware of the tradition. I still repair broken alphabetical runs and straighten piles on tables, absently despite myself, whenever I'm in stores. It calms me during book tours (Lethem 29)."

Reflections on relationships to women, from teenage years to adulthood, have been written about constantly by the usual grouping of white male authors. There are other views out there, from women, homosexuals, and nonwhites, that bring this cycle to completion. But much like his bookselling memories, Lethem's memories of teen angst in dating and coveting are painfully true. He seems to sum up what was going through my mind (and still does, occasionally), energies that I personally put into terrible fiction, poetry, and self-exile.

"These girls blew hot, and could be mockingly affectionate or even briefly lusty in my direction, but in their willingness to show disdain, to crush unworthiness like a bug, they were fundamentally cool, cool, cool. I had a lot to learn, and I put my own enthusiasms and provenances on the table very carefully, or so it felt to me. They had a name for what they despised, 'green,' a word which seemed to encapsulate being lame, unenlightened, feeble, corny overreaching or straining for effect, and much else. I lived in fear of being cast in that shade (Lethem 40)."

In addition to feeling solidarity with Lethem's memoiresque remembrances (he's one of a good handful of writers I dearly hope to meet someday), I was immediately reminded of his skill of literary criticism (and also reminded of The Disappointment Artist and the brutally compelling essay on Edward Dahlberg). Lethem knows his way around genre fiction, literary fare, and the often-critiqued combination of the two. There is a definite feeling that this collection is merely an appetizer of further thoughts. In addition to "clerkly traditions," Lethem also understands the tradition of writerly influences and reasoning. So many books, essays, and interviews have long debated the reasons why writers and artists create, and while Lethem is not attempting to sum up these seemingly metaphysical possibilities, he manages to provide one of the better hypotheses.

"Most artists are brought to their vocation when their own nascent gifts are awakened by the work of a master. That is to say, most artists are converted to art by art itself. Finding one's voice isn't just an emptying and purifying of oneself of the words of others but an adopting and embracing of filiations, communities, and discourses. Inspiration could be called inhaling the memory of an act never experienced. Invention, it must be humbly admitted, does not consist in creating out of void but out of chaos. Any artist knows these truths, no matter how deeply he or she submerges that knowing (Lethem 97-98)." 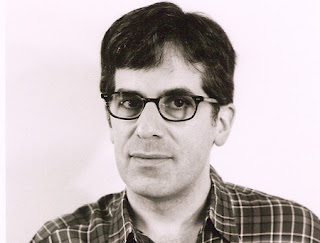 At his best, Lethem combines the technical aspects of writing with the intangible (sometimes these distinctions are mutually exclusive, sometimes not). For as intelligent as he is, there's never a feeling that he claims to have all the answers for the never-ending questions of fiction and writing. But even with his opinions, he manages to illuminate some of the shaky definitions and assumptions. Anyone who has read my essays consistently knows of my fascination, disdain, and collective confusion over what constitutes postmodernism. Lethem understands that it's a mess, and his definition is both right on and comical in its showcasing of that very mess.

"Let's wade into the unpleasantness around the term 'postmodernism:' Nobody agrees on its definition, but in literary conversations the word is often used as finger-pointing to a really vast number of things that might be seen as threatening to canonical culture: author-killing theories generated by French critics, collapsings of high and low cultural preserves into a value-neutral fog, excessive references to various other media and/or mediums, especially electronic ones (ironically even a Luddishly denunciatory take on certain media and or/mediums may be suspect merely for displaying an excess of familiarity with same), an enthusiasm for 'metafiction' (a word that out to be reserved for a specific thing that starts with Cervantes, but isn't), for anti-narrative, for pop-culture references or generic forms...(Lethem 79)."

He can also be intentionally contradicting. The above reflection on art coming from art can sometimes lead to hoisting up a biased debt of gratitude:

"The crime of Literary Rushmore, the one that anyone notices first, is that which ought to dissolve Rushmore forever in a bath of shame, but never does: The stone heads are white American men. There's never a Cather or Ellison or Baldwin or Oates or Ozick or Morrison on that mountain, no matter how unmistakably said person may have knocked one out of the ballpark that particular year, or decade, or century (Lethem 368)."

This review may very well come across like a giddy fan's adoration of a given literary hero. However, while I could easily cite other great passages, namely Lethem's thoughts on Italo Calvino and his problems with the style and demeanor of literary critic James Wood, there were a few essays that didn't grab me like the other ones. I've never been a major reader of graphic novels or comic books, so while I appreciated the effort, I didn't think twice about his essays on Spider-Man or Marvel comics (as much as I adore him and Michael Chabon, there's only so much academic writing I can take on those subjects). The latter half of the collection is dominated by writings on Brooklyn, some of which are vivid (and one, "Ruckus Flatbush" is a cool, almost hip-hop poetic freestyle on the borough's idiosyncrasies), but sometimes a bit repetitive. Granted, the majority of these essays were published elsewhere, but the mental image of a person wearing a Brooklyn Dodgers cap without a bill, resembling a yarmulke, was repeated often and lost its metaphorical shine after awhile. These are minor, almost squabbling complaints, and there is so much in The Ecstasy Of Influence that reaffirmed by literary beliefs and gave me genuine material for deep thought. The collection might seem like Lethem's hand-selected "best-of" anthology, but it's really so much more. For someone like me who loves to be entertained and educated at the same time, this is a nearly perfect book, especially since I came out of it energized and further appreciating Lethem's stances on a myriad of issues. Upon immediate reflection, Jonathan Lethem quite adept at selecting his own material for a single collection. He knows his strengths, he lets his intellect do the talking, yet he's just humble enough to offer critiques of his own essays with honesty.