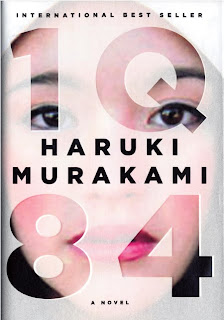 To say that Haruki Murakami's 1Q84 was an anticipated release is the very definition of "understatement." Annually, dozens of books have a lot of true build up and excitement long before publication, but not since the last Harry Potter release has a title warranted over a year's worth of speculation and midnight release parties. As I've mentioned, I'm still behind on the majority of Murakami's bibliography, but I couldn't help but join the communal anticipation. In Japan, the novel's 2009 release became the bestselling title in the country's history. Even the slightest hints (the titular pun, the online preview of the first chapter) really didn't give much away, plot-wise. Granted, I'm sure I could have snooped online and found summaries or concrete previews, but it would have taken the fun out of actually going into the book with no notions or knowledge. I finished reading it a few days ago, and have waited to gather my thoughts rather than jumping right into a review; granted, this is my standard method for any book review, since I'm not only any real deadline. The more I think about 1Q84, the more I'm torn between my genuine appreciation and some of the book's small problems.

The novel manages to be both massive in its scope as well as relatively basic in its plot lines. The chapters alternate between two main characters. Tengo, a young Japanese math teacher and fiction writer, is secretly commissioned to re-write a novella entitled Air Chrysalis, originally dictated by a mysterious teenage girl named Fuka-Eri. The story reveals the secrets of the religious cult in which Fuka-Eri was raised, and when it becomes an instant bestseller, Tengo and his editor try to keep the ghostwriting under wraps as unwanted attention begins to pile up. The other main character is Aomame (Japanese for "green bean"), a young fitness instructor who moonlights as an assassin for a wealthy widow, carrying out hits on pedophiles and abusive husbands. Aomame is haunted by her own past in the religious cult, her one true love from childhood, and the realization that she is experiencing two separate worlds. She has moved from 1984 into 1Q84 (the "q" stands for "question mark," and is also a play on the Japanese character for the number 9). The world of 1Q84 features two moons unseen by anyone else, as well as subtle differences between the true reality and the alternate present time. After Aomame carries out her final mission, the two separate realities begin to merge, with reflections of Air Chrysalis and the side-by-side convergence of her and Tengo. Other minor yet important characters come into play: Tamaru, the intimidating gay bodyguard of the dowager; Ushikawa, a seedy, ugly private investigator for the religious cult; the cult's Leader and the fantastical creatures known as the Little People; and the passing friends and lovers of Tengo and Aomame.

Given the wealth of ideas and plots, it's remarkable how easy 1Q84 is to follow, and much like the story, its form is also a separation between the postmodern and the standard genres: romance, thriller, and science fiction. In some of the book's best passages, Murakami goes off on metaphorical tangents that sometimes give thematic hints, but mostly work as their own little vivid slices:

"Tengo was just then dreaming about crossing a long stone bridge on a river. He was going to retrieve a document that he had forgotten on the opposite shore. He was alone. The river was big and beautiful, with sandbars here and there. The river flowed gently, and willows grew on the sandbars. He could see the elegant shape of trout in the water. The willows' brilliant green leaves hung down, gently touching the water's surface. The scene could have come from a Chinese plate (Murakami 64)."

The thriller aspects, namely Aomame's assassin work and conversations with the dowager, are as blatantly satisfying as any such scenes found in an action film, and they alternate between gripping and beautifully evasive. When Aomame and the dowager discuss an "assignment," everything is left between the lines.

"'Of course a person's existence (or nonexistence) cannot be decided on the basis of mere practical considerations--for example, if he is no longer there, it will eliminate the difficulties of divorce, say, or hasten the payment of life insurance. We take such action only as a last resort, after examining all factors closely and fairly, and arriving at the conclusion that the man deserves no mercy (Murakami 219).'"

Some people may disagree with me, but I found the asides and the intentionally vague descriptions to be extremely well-written. Murakami's metaphors may not be the best examples, but he crafts them to be evocative and extremely visual. However, and most people will agree with me on this point: 1Q84's biggest problem is repetition. Various passages and ideas are constantly reflected and rephrased: Fuka-Eri speaks in a halting, direct style devoid of punctuation or inflections; Tengo is haunted by early memories of his mother standing by his crib, having her breasts suckled by a man who is not Tengo's father; Ushikawa is ugly with a misshaped head. These range in plot importance, from immediate to passing, yet Murakami repeats these descriptions constantly and steadily. After awhile, a reader wouldn't be faulted for thinking to him or herself: "Okay, I get it. Move on." In certain cases, this would be insulting to the reader, since the atmosphere would be one of a writer assuming that the reader had forgotten these elements. However, for someone as established and revered as Murakami, it seems to be a constant need to address the book's unusual atmosphere, even though the descriptions are enough to be mentioned once or twice and not revisited. I would never be one to complain about a novel being too long; however, such a massive work would have benefited from a scaling back of repeated ideas. 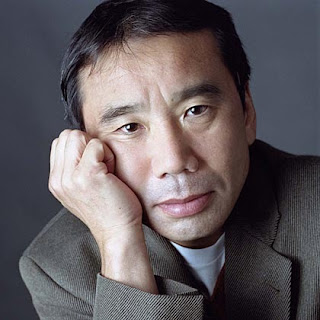 On the flip side, some of the passages demand further explanations and do not get them. Toward the novel's end, Fuka-Eri disappears, and aside from a long letter sent to Tengo, she's simply forgotten about. Air Chrysalis is summarized and shown to reflect the actual workings of the religious cult, but its late appearance is obvious, providing no new insights into how the story ties into reality. Tengo's memories of his mother are repeated, but never explained, except in vague connections to his affair with a married woman. Murakami gets very close to impassioned critiques of religious movements and cult mentalities, but just when he gets into what could be revealing insights, the story jumps away to another part of the plot, leaving a potentially sociological/cultural aspect virtually untouched. There is so much good to enjoy in 1Q84: the science fictional elements are seamlessly integrated and made out to be realistic in their own ways, and there is a genuine joy and excitement in figuring out how Tengo and Aomame are connected. However, the novel as a whole nearly suffers from a death by a thousand cuts. The little problems, both stylistically and thematically, bring down what is very close to being one of the best novels in recent memory.

I won't go into a long discussion of the book's sex scenes, but it is worth noting that 1Q84 has been nominated for the 2011 Bad Sex Award: The Guardian has linked the more dubious passages here. From Philip Roth to Jonathan Franzen, the literary merits and distractions of bad sexual writing have been discussed in many ways. Murakami's descriptions can be embarrassingly comical at times, but they tie into my above critique. It's not so much that they are bad, but they are repeated far too many times. Aomame has misshaped breasts; her friend Ayumi has perfect ones. Tengo's penis is described both hard and flaccid. Other writers have written worse, but when the ideas and images are constantly refreshed, the repetition calls far too much attention to already shaky passages.

While I am being pretty critical, I do want to stress that this is a work of redeeming merit. Murakami has a keen sense of blending genres and everyday situations that cross multicultural boundaries. Again, the science fiction never feels out of place, and the initial set-up draws the reader into the strange world without question or hesitation. While I'm no expert in contemporary Japanese life, Murakami is an expert at conveying societal norms and the isolation of people who want to live their own lives. The Tokyo in 1Q84 is daunting and crowded, and Tengo and Aomame are perfectly captured as the classic lost souls in an unforgiving metropolis. With this in mind, it's saddening to realize that little mistakes mar this otherwise excellent novel. There is so much left unspoken and undeclared, and it's difficult to imagine why Murakami left these holes in an otherwise meticulously plotted work. Tengo and Aomame get their happy ending, but the reader will likely be left only partly satisfied. I do recommend 1Q84, but cannot help but wonder if I've missed something. I don't think I'm being too picky with the fine details, but they are what separates it from being a classic instead of just a very fine novel.