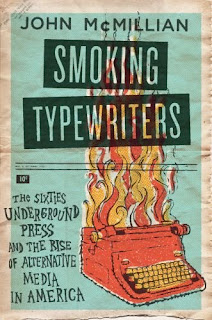 While I've been maintaining this blog for a couple of years, as well as keeping up as best I can with dozens of other blogs (whether independent or associated with larger newspapers or websites), I still hesitate to say that I'm part of a "blogosphere," nor do I claim to be the best insider source for literary reviews or happenings (far from it, in fact). However, for better or for worse, hundreds of other bloggers, the majority of them political, maintain conduits of information and opinions that make up a stunning change in media consumption that has been growing for the last decade or so. This is "alternative media" in a literal sense, but, like any groupings of publications (physical or digital), there are a few good sources and a lot of mediocre ones. Perhaps this era will be looked back upon with nostalgia or a better sense of its groundbreaking moments/sources, but as John McMillian's newest book shows, the beginning of the alternative media movement was, because of its time, truly revolutionary, since far-left writings and government critiques were viewed as genuinely subversive. As an earlier review of mine has shown, history books are flourishing, with multiple takes on every possible era, from every possible political point of view. The beauty of McMillian's Smoking Typewriters is, instead of recapping the already documented seeds of 1960s unrest, an excellent exploration of the era's reading materials and writings in correlation with its activism.

The roots of underground media, according to McMillian, begin with the communications of the New Left's activist group Students for a Democratic Society (SDS). The Port Huron Statement was the group's original manifesto, exploring the need for national activism, but as SDS grew, its mission and policies began to reflect the need for unrestrained dialogues between all members, with no censorship or masking, and those reflections can be seen as the start of the growth of the underground press. McMillian's explanations also provide a key understanding to any revolution, either journalistic or political: it's rare to have a movement that begins seemingly overnight. Beginnings can usually be traced back to smaller events or happenings.

"Although SDS began establishing a democratic print culture with the Port Huron Statement, the ethos they built around their printed communications did not become a pronounced force in the organization right away. Instead, it evolved gradually, over the course of several years, in an effort to retain the harmonious social relations that characterized SDS when it was founded (McMillian 17)."

The SDS began publishing the Discussion Bulletin, which became "an 'organ of intellectual exchange,' a 'dialogue,' a 'forum,' [and] a 'medium (24)." In addition to the sociological necessity for the new media, the advent of cheaper printing presses and mimeograph machines aided the development of low-cost, high volume newspaper and pamphlet production. In essence, besides hinting to the future of more open media, the underground press also provided an excellent glimpse of the eventual punk-DYI movement. This foundation and ideology led to the publication of several famous underground papers, from The Village Voice (which happened to come before the 1960s), The Berkeley Barb, and The Chicago Seed. McMillian's research and writings highlight the well-known papers, but also shed light on some of the lesser known writers and papers that thrived, even with the threat of harassment and physical harm for publishing subversive material. This happened both as a result of a writer inserting himself into a dangerous situation such as an antiwar rally, or simply by virtue of being in an office that was targeted by opposition citizens.

The best sections of Smoking Typewriters highlight the people behind the papers, names that even today tend to fly under the radar, even though they helped define the literary democracy of the times. Not only does McMillian provide excellent details of the writers' and editors' philosophies, their personal backgrounds are often just as compelling, and occasionally sobering, since the majority of them suffered from backlash and a wealth of emotional and mental problems. McMillian doesn't make immediate correlations between the stress of potential violence due to the publications and the occasional aftermath of psychological woes, but occasionally, the connection is impossible to ignore. One of the most sympathetic figures in Smoking Typewriters is journalist Allen Young, a writer who began as a beat reporter with the Washington Post, but ended up throwing himself into the Liberation News Service (LNS), opting to follow his own integrity rather than a potential safety net with a secure, mainstream news source. His story is an excellent example of the humanity behind the underground press, a far cry from the conservative belief that the people behind such material were evil and immoral.

"Though thrilled to be launching his career at the Post, where he was assigned the nighttime police beat, Young felt conflicted in several important ways. First, he resented the fact that he was trained 'to pay serious attention to a murder if the victim was white, and not to worry too much about it if the victim is black.' And while Young regarded the Post as a rather conservative paper, he was surprised to learn that the cops he worked with thought it was scandalously left-wing...another complication was that Young was secretly gay at the time, and as a result he regretted have to spend so much time in the newsroom and the police precinct; the first struck him as a 'boys club,' and the latter was a 'highly macho environment.' But probably his biggest frustration lay in the fact that as a working journalist, he was prohibited from taking an active role in the antiwar activity that was happening right before his eyes (McMillian 145)." 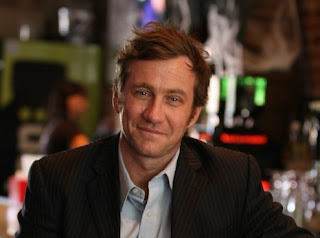 I was very impressed by McMillian's writing style. His introduction and tone present an obvious enthusiasm for his subject, and while he undoubtedly agrees with the legacy and importance of the underground press's beginnings, the book is a scholarly, historical account. He manages to provide the fantastic backgrounds of both the papers and the people, showcasing them as individual components as well as interlinked assets to each other. Given that the start of underground media coincides with some of the most famous political movements of the 1960s (the rise of feminism, the Black Power movement), McMillian deftly writes about the events without going overboard, given that the more famous happenings have already been documented before; rather, his focus is on the creators and the writings, some of which may not have had proper text documentation before. As I mentioned above, a good number of history books have an obvious political slant, both left and right. Smoking Typewriters is an unabashed homage to the New Left, but McMillian leaves his own opinions aside, and instead allows the actual history to do the reporting. I'm sure that it would be easy for a conservative author to provide his or her own critique of the tumult that was the 1960s, as well as a condemnation of the anti-establishment materials that were published. However, this is rare book that has no need for the author's own political commentaries, since the sociological and political aspects are the reason that this book exists. Smoking Typewriters was published earlier this year, and hopefully it will gain more attention as a wonderful historical text, even though, as the past few years have shown, commendable titles can sometimes get lost in the sheer number of political/historical books published every month.


Work Cited:
McMillian, John. Smoking Typewriters: The Sixties Underground Press and the Rise Of Alternative Media In America. Copyright 2011 by Oxford University Press, Inc.
at May 25, 2011