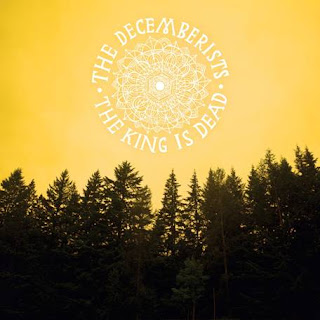 "The beauty in Colin Meloy's songwriting, and the maturation of the Decemberists as a complete unit is that they very well could have been a "one and done" band, since their music had the potential to regress into satire or, even worse, repetitiveness."

I wrote this back in 2009 for Aught Music as part of my take on the Decemberists' debut album, Castaways and Cutouts. As I also mentioned in my other writings, my appreciation for the band stretches back for many years, and while I tend to be biased in their favor, I still keep thinking about how drastically wrong things could have gone for them. Their early albums for Kill Rock Stars contained songs about gin-runners, World War I soldiers, and chimney sweeps. While originality bordering on audacity worked wonders, I don't think anyone would have immediately blamed early critics for thinking that the band would peter out and be remembered today only in terms of hipster favor. However, 2005's Picaresque, while still based in a combination of old-time storytelling and modern hints, was much more expansive, creating miniature narratives contained within single songs. Every since moving to Capitol Records, songwriter Colin Meloy has continually upped the potential, creating masterful concept albums based around Japanese folklore (The Crane Wife) and an absolutely stunning rock-opera about (naturally) ill-fated lovers and an evil queen (The Hazards Of Love). After that last feat, what could be next? How much more inventiveness be packed into a single album before veering into experimental tones? This week, the band released The King Is Dead, and has again gone into new territory. However, this new territory is not marked by more complexities. The Decemberists have scaled back drastically this time around, and have offered their interpretation of Americana.

Sans Meloy, the other members of the band teamed up last year for a small album of almost exclusively instrumental bluegrass-folk songs, Feast Of the Hunter's Moon, under the name Black Prairie. The King Is Dead is not an extension of this, but rather an impressive combination of classic sounds with a more modest lyrical approach by Meloy. The opening track, "Don't Carry It All," is an emotional prairie hymn, exploring personal freedom disguised as a harvest ode.

For a songwriter as historically-based as Meloy, this is a curious, yet effective opening. It could be viewed as a thematic hint to the rest of the disc, if the atmosphere The King Is Dead is meant to be more "historically rural" in tone. The usual sounds are there, but it's heavy on harmonizing, creating an uplifting group sing-a-long, not unlike a church hymn. Then, as if to appease the die-hard fans who have come to expect murderous Irish gangs and adolescent royalty in their music, "Calamity Song" becomes the "expected" Decemberists song, a more rocking dream landscape that nods back to the band's early millennium days: 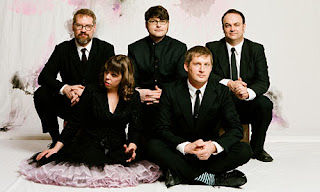 For the most part, this minimalist album is not so much a return to their roots, but an entirely different package that, with their other works in hindsight, could have been their impressive debut instead of Castaways. However, while there's almost never such a thing as a perfect band or album, The King is Dead does hit the occasional stumbling block. "This Is Why We Fight" isn't a bad song, but in their war song canon, it's unnecessary, especially when compared to previous efforts like "The Soldiering Life" and "Sons and Daughters." The melody is impressive, but it's one of Meloy's weaker lyrical efforts, a repetitive poem that never really stays with the listener like other songs. Meloy has an excellent gift for selecting impressive female guest vocalists, as heard on the stunning layers provided by Shara Worden and Becky Stark on The Hazards Of Love. This time around, the guest is Gillian Welch, a singer/musician who has made her own impressive marks on contemporary American folk and traditional music. However, The King Is Dead offers her little to no true spotlight. She's merely relegated to being a backup singer, and it's almost impossible to pick her out among the chorus of voices, backup vocals that are harmonically impressive, but are a group effort, since Meloy does his normal job of carrying the weight.

These may be mild complaints, and overall, The King Is Dead (a titular nod to the Smiths, who Meloy has frequently cited as an inspiration), is an impressive album. However, given the musical novellas that the group has provided in recent years, it may be a bit unnerving to listen to a quaint American roots homage. There's no specific theme to follow, and that's not necessarily a bad thing. I don't for a second believe that they've exhausted their abilities, but rather intentionally opted for a less bombastic approach this time around. And the fact that they can switch between styles without resorting to gimmicks is really an overall plus. As much as I adore Sufjan Stevens and Sam Beam, for example, some artists, despite their brilliance, tend to focus on the same lyrical and musical styles. Perhaps The King Is Dead is merely an interlude before another sprawling epic. This album isn't Meloy's best example of lyrical writings, but there are subtle hints and imagery that take shape after multiple listens. "Down By the Water" is an excellent example. While Meloy doesn't go for specific details, he shows that his ear for metaphor is just as strong as his ear for history.

I can imagine that some listeners will be disappointed by this album, but honestly, it's charming and smart, especially since The Hazards of Love will be very difficult to top, and they didn't go overboard trying to do that. This has been a quiet month for music releases, so in hindsight, this is a small gem to open 2011. It may not be immediately remembered at the end of the year, but the band has nothing left to prove. For now, the small scale is very effective.
at January 19, 2011