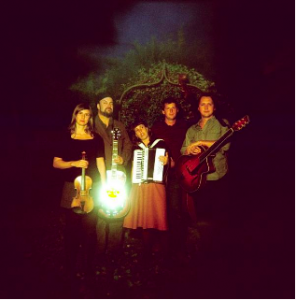 The April release of Feast Of the Hunter's Moon, from the Portland band Black Prairie, has been getting curiously little fanfare as of late, and I mean this in terms of review quantities, rather than qualities. I bought the album on its release day without any hesitation, since it includes three members of The Decemberists: Jenny Conlee, Nate Query, and Chris Funk. Before even getting into the music itself, the album represents a lot of positives in music and artistry, even if this initial assumption is done superficially. Three member of a major label (Capitol) band have, for creative purposes, created a work for a smaller label (Sugar Hill--not that small, but when compared to Capitol, the designation is apt). These musicians have employed the help of a gifted Portland violinist (Annalisa Tornfelt) and Jon Neufeld. The final result is a compelling mash of folk, Americana, and bluegrass acoustics, yet another highlight of the brilliance of the Pacific Northwest's music scene, and a curious hint to what these people have done in the past.

"Across the Black Prairie" is a beautiful opening track, immediately leading the listener into the overall vibe of the album. It's four minutes of accordion and violin heavy jaunt, starting off eerily quiet before rising into an almost calming (yet vibrant) melody that would be at home on any Americana mix or soundtrack to American roots music. This leads into "Red Rocking Chair," a more somber piece featuring minimal vocals, which almost work as a distraction. The vocals are shadowy and beautiful, but for a primarily acoustic album, the attention is taken away from the instrumentals. But after this, we're treated to more classic-sounding riffs, a rollicking string-themed "Back Alley," which serves as an emotional pick-me-up following the darker preceding track. 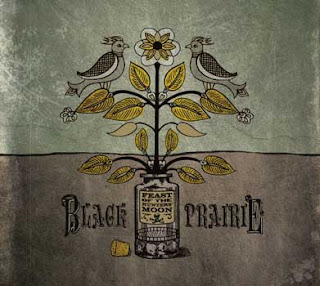 The previous mention of "soundtrack" becomes much more prevalent beginning with "Ostinato Del Caminto." The middle tracks of the album, at least to me, almost work perfectly as an homage to silent-film scores. Instead of singular tracks working as complete emotive pieces, the middle of Feast Of the Hunter's Moon combines highs and lows together, and can be easily imagined as compliments to suspenseful, climatic film scenes. The founding members of The Decemberists actually did score films in Portland prior to their band work, and while Black Prairie is a completely original outfit, separate from Colin Meloy's project, these influences are hard to miss.

The vocals on "Crooked Little Heart" work much better than the one's on the album's beginning, showing the multi-instrumental talents of Tornfelt. Conlee provides her own soft backing vocals, and the effect is extremely beautiful. I've been awfully harsh on Conlee's vocals on certain Decemberists tracks, and I've been quick to balance these critiques with intense praise for her musical talents, since her vocal contributions have been minimal. Tornfelt has her own weaknesses as a vocalist, so this album won't serve as any major debut or discovery; however, she holds her own extremely well, and reminds me of an early Decemberists contributor, Petra Haden. She's at her best when playing the violin, but when the vocals are needed, the effect is extremely pleasant.

Nate Query and Chris Funk have performed admirably in The Decemberists, but Feast Of the Hunter's Moon and the Black Prairie outfit give them a much deserved spotlight. These men are terrifically skilled, and have added amazing touches to Meloy's lyrical storytelling. However, this new album is a new avenue for them, showing that they're capable of holding their own as the leaders. In reading the intial reviews of this album, the formation of Black Prairie was done because some of their songs worked better when separated from the usual Decemberists canon. However, I often wonder what playing with Colin Meloy is like for his supporting musicians. Side groups, collaborations, and solo projects have produced some phenomenal albums this century (Autumn Defense and the Postal Service's Give Up are two examples), but on the other side, some of today's greatest artists are notoriously difficult to work with at times. Meloy usually isn't included with the likes of Jeff Tweedy, but there's never been any denying that he's the main face of the Decemberists.

Overall, Feast Of the Hunter's Moon is a worthy addition to the recent surge in alternative/contemporary folk and bluegrass music. The album is a seamless combination of classic influences and modern, creative touches. I found it odd that NPR hailed the work as "a sound which defies any kind of genre characterization." While it's not a work that can be pigeon-holed, the genres are generally explicit, but elevated by the modern touches. However, the songs are terrific, and a little hyperbole from a respected media source can be forgiven because of the beautiful music.
at April 18, 2010