The Star and Strikes 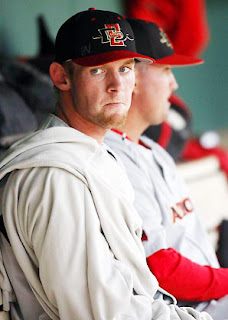 The fact that I was going to write a piece to coincide with the start of the 2010 Major League Baseball season has been a given since the close of the 2009 season. However, the topic itself has gone through a few changes in the past month. At first, I was going to go the usual route with a light preview of the upcoming season (much like when I picked the Kansas City Royals to compete for the American League Wild Card. Ouch.) After I scratched that idea, I was pretty set on writing Chicago-only previews for the Cubs and White Sox, partly as a homage to the title of this blog, despite the fact that the title arose as a tribute itself to my home city when I lived in Seattle. Now, the piece you're reading concerns a player on a team, the Washington Nationals, that's almost guaranteed to finish in last place, even among the not-so-vocal fans of the D.C. region. The player, right-handed pitcher Stephen Strasburg, isn't even on the Opening Day roster, and was largely unknown outside of baseball circles a year ago. A few nights ago, his story and hype popped into my head, and the postives and negatives of his emergence seem to be struggling for dominance.

At first glance, the onslaught of attention for Strasburg is great for the game. As the first overall pick in the 2009 draft, he was heralded as one of the best college pitchers to ever emerge, receiving attention usually reserved for college football or basketball picks. He was undrafted out of high school, but dominated as a pitcher for San Diego State, registering an astonishing 1.57 ERA during his 2008 season. His draft position made headlines on ESPN and dominated the sports journalism world, a tremendous feat considering that critics claim that baseball keeps losing ground to the popularity of basketball and football, and even in the face of a rapidly advancing technological world (this was the theme of a recent column by Rick Morrissey of the Chicago Sun-Times). As is the case with a lot of baseball (or football, for that matter) draft picks, he held out after being drafted by the Nationals, signing almost literally at the last minute for a record four-year, $15.1 million dollar contract. But this is just a business aspect, right? Possibly, but this also drew headlines because Strasburg is represented by agent Scott Boras.

One of the chic things to do in baseball is to bemoan the effects of the "superagents," the people behind the scenes that negotiate the mega-million dollar contracts for elite Major League players. However, this bemoaning goes far beyond the chatter heard in pregame discussions over beer. It can be easy to complain about the lucrative contracts, especially in an age when most people are struggling. However, the problem with agents like Boras is the air of "making sure said player is paid what he is worth," when it's obvious that the bigger the contract, the bigger the cut for Boras, et. al. I'll get to the Boras effect later; let's start with the immediate possibilities. 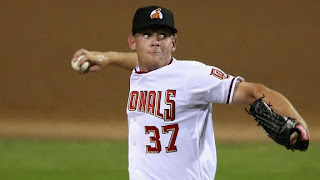 Strasburg is starting the 2010 season in the minor leagues to get some more low-pressure experience under his belt, despite the assumption among scouts and fans that he's ready for Major League action. Depending on who's asked, he'll be called up in June or July, but in reality, if the Nationals struggle early (as they almost definitely will), he could be with the team by early May. When this happens, it will be a major event, the game will likely be televised nationally, and this is good for baseball in Washington. They relocated from Montreal thanks to an indifferent fan base, and while the D.C. area has somewhat embraced them, the novelty has worn off. Their best pitcher is left-hander John Lannan, who would likely be a middle rotation player for a contending team. Their best position players are Adam Dunn (great power, but seriously prone to striking out), and Ryan Zimmerman. After that, the team is a collection of young, unproven players and veterans past their primes. While this could make for a great movie script, the reality is that the Nationals don't look like contenders this year or next year. How will that effect the most heralded pitcher in Washington, D.C. since (and this is no embellishment) Walter Johnson?

The pressure will be great, but exciting. If Strasburg struggles (but stays healthy), the hype will die down, and he'll work towards a stronger full season in 2011. But let's assume that he dominates immediately, going, for argument's sake, 10-2 with a 2.90 ERA. Given his already famous stature, and assuming that he keeps up his performances, he'll be one of the most feared pitchers in baseball. However, as is the beauty of baseball, he's only one man, and as brilliant as he can be, he can't carry the entire team (look at his division rival, Roy Halladay--he dominated the American League but never made the playoffs with the Toronto Blue Jays). The Nationals' farm system isn't the greatest, and unlike the Cleveland Cavaliers and Lebron James in the NBA, the organization doesn't have the resources to sign free agents to compliment their star (assuming Strasburg is as consistent as advertised when he's finally called up). His contract will be up in 2013. And this is where Boras could factor in negatively.

Unless they become playoff contenders in the next few years, it would be hard to imagine Strasburg staying in the D.C. area, playing for a mid-market team. A year or two before the end of his contract, the media would begin to whisper about his potential signing with another team--and being that his agent would demand a large contract, the list of potential teams would be whittled down to the usual suspects: the New York Yankees, the Boston Red Sox, and the New York Mets. This is the business of baseball, as negative as it is at times. But the reality is always there, and that was out in the open last night as I watched the opening game between the Yankees and Red Sox. One of the announcers casually mentioned Boston's Adrian Beltre signing a 1-year contract, with the hopes of putting up big numbers and demanding a longer, more lucrative deal after the season. Beltre's agent? Scott Boras.

But with the new season beginning, there's always optimism. The atmosphere of this post may be negative, but the fact that Strasburg has created so much press as someone who hasn't thrown a single Major League pitch is good for baseball, showing that young players can create excitement, even for struggling teams. However, Strasburg should do his best to avoid the hype and focus on improving himself, whether that be in his early start in the minors, or during his starts when he's called up to the parent club. I've never been one for sports cliches, and as I've mentioned numerous times, baseball seems to received the bulk of grand pronouncements. But then again, as a baseball fan, it's hard not to get caught up in the adrenaline rush of a new season. Players like Strasburg should revel in the clean slate, and in reality, baseball is enjoying increasing popularity, even, as Morrissey states, in our fast-paced era. But nothing is guaranteed. Strasburg has to perform, and hopefully, he'll become an adopted son of the region, much like catcher Joe Mauer, the first overall pick of the Minnesota Twins in 2001, and the current American League MVP.

But, to reiterate an important point, nothing is guaranteed. Just ask David Clyde or Kris Benson.
at April 04, 2010