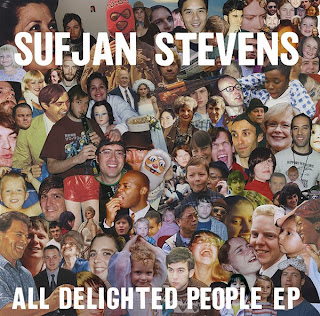 I imagine that Sufjan Stevens has the potential to be one of the more polarizing figures in American music. He's a tremendous singer, a skilled multi-instrumentalist, and a songwriter who has the ability to shine with both symphonic, lyrically-packed epics as well as softer, more "singer-songwriter" fare. Despite these observations, my best friend, a man who studies and knows more about music than virtually anyone else I know, cannot stand Stevens's music, either lyrically or melodically. While everyone is entitled to his or her opinions, it would be impossible to deny the fact that Stevens always aims high in his work and resists any attempts to be pigeon-holed or strictly classified in a given genre. He's released works that can fall under the literal banner of folk music (Michigan and Illinois) or experimental (Enjoy Your Rabbit). I've heard Stevens referred to, musically, as a minimalist, which never fails to surprise me, since his albums are anything but: his "50 States" albums, while only two deep, are almost shocking in their expansiveness, research, and use of a wide array of instruments. Last month, with little fanfare, Stevens released All Delighted People, an EP in name only, since the work runs over an hour. The album seems intent on combining every reactionary feeling or definition that listeners want to apply to Stevens, and the result is, to put it mildly, compelling.

All Delighted People doesn't appear to be a strictly thematic album, but retains the standard "everything but the kitchen sink" model of Stevens's music. The opening title track is eleven minutes long, and has been likened to a grand homage to Simon and Garfunkel's "Sound Of Silence." It's a terrific example of everything that's made Stevens famous. He's joined by a wonderful backing chorus, and the song grows (both literally and figuratively) with swelling voices, orchestral echoes, and sometimes haunting switches between sheer optimism ("all delighted people raise their hands") and despair ("I'm still afraid/of letting go of choices I have made"). As exhilarating as it is, it could also be used as an example of why people, such as my friend, dislike his sounds. It's long, varying in its beats and structure, and is either a great piece of bombastic music or a needlessly overblown extravaganza. However, as a possibly unintentional counter, Stevens repeats the song later on in the album, presented as a "Classic Rock Version," drastically scaled down, but losing none of the musical power of the previous version. These two versions of the same track also work in highlighting what I mentioned above, the constant dynamic between Sufjan's ability to go all out or scale back heavily, but, depending on the song, not losing or sacrificing any intangible qualities. 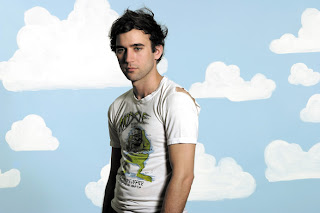 Jumping to the end, the bulk of All Delighted People is devoted to a nearly twenty minute track entitled "Djohariah," named for Stevens's sister. It's even more expansive than the opening, incorporating a lazy brass opening before quickly working its way to scaled back vocals and a guitar interlude that's scattered and broken up, but somehow meshes perfectly in its opposition to the continuing vocal backgrounds. This continues, almost drone-like, for the majority of the track, creating (again, depending on one's opinion of Stevens or his style in general) a curiously meditative piece of sound or repetitive meandering. It then switches directions, becoming a beautiful dedication, full of little bits of life advice ("Don't be ashamed don't hide in your room") and simple, funny rhymes that work well in their simplicity ("glorious victorious"), especially given the complexities of the song's previous fifteen minutes.

To tip my cap with another Simon and Garfunkel reference, "All Delighted People" and "Djohariah" make strong, expansive bookends to the middle of the album, songs that, by themselves, would be much more deserving of the EP status. The other tracks are much more standard, but nonetheless delightful and excellent entries into the Stevens canon. There's the semi-religious track with obvious folk influences ("From the Mouth of Gabriel"), and a beautiful song that, while not place-specific, feels like it could fit very nicely on Illinois: "Enchanting Ghost." Stevens's voice and a piano is all that's really needed for a beautiful, soft track that contains a wealth of emotion without the intense productions of the the longer songs. The same goes for "Heirloom," with the only major difference being the substitute of an emphasis on guitar backings rather than piano.

Of course, as mentioned before, if you don't consider yourself a Sufjan Stevens fan, there's nothing on the album that will change your mind. However, for his admirers, this is a wonderful little collection that highlights the many dimensions of his skills. There's no real connection or unifying message, but rather a wonderful album of musical simplicity and expansion. Given the disc's quiet release, it's been gaining a lot of attention from the major music websites, but really, the beauty lies in the feeling that this is just a small offering in between his major releases. He's normally a master of the concept album, but even this culled-together gem works as its own idea, that a seemingly mixed collection can stand on its own. Perhaps the praise is giving All Delighted People more attention than Stevens anticipated, but to close with a line that I've used all too often, it's telling when an album like this is still better than a good ninety percent of the other music being released today. His latest full-length album, The Age of Adz, will be released in October, and based on the album's description on Stevens's website, listeners could be in for another side of his talents, or All Delighted People was a thematic preview of "the lack of conceptual underpinnings."

"The Age of Adz (pronounced odds) is Sufjan Stevens’ first full-length collection of original songs since 2005’s civic pop opus Illinois. This new album is probably his most unusual, first, for its lack of conceptual underpinnings, and second, for its preoccupation with Sufjan himself."